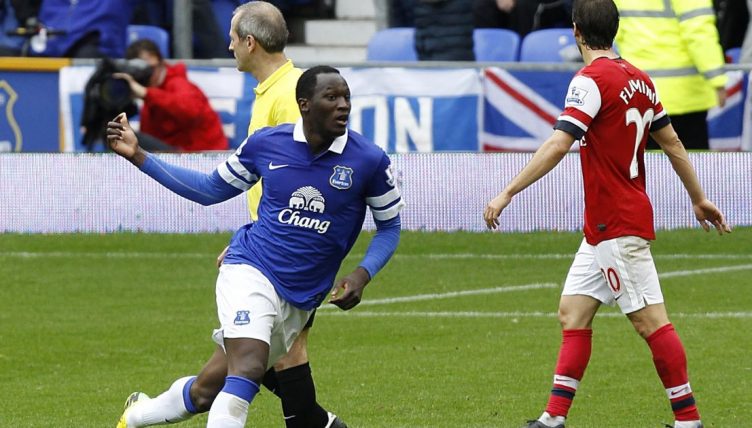 Romelu Lukaku has, without doubt, asserted himself as one of the Premier League’s finest strikers of the past 10 years and, after returning to Chelsea, will be eager to establish himself as an all-time great.

Under Antonio Conte, Lukaku found the net 64 times for Inter Milan. Just under £100million was spent to bring him into Thomas Tuchel’s set-up and with a potential debut against Arsenal just around the corner, we rank every one of his Premier League goals against the ‘big six’.

A great penalty but, at the end of the day, that is all it was. It would have to have been one hell of a spot-kick to make it any higher in the list.

Quite possibly the Belgian’s most iconic match on English soil.

This composed finish is the second of what was a brilliant hat-trick in Sir Alex Ferguson’s final game at the Red Devils helm. Way to steal the spotlight, Romelu.

The build-up to Lukaku’s hat-trick goal edges ahead of his second on the day.

A wonderful cross from Graham Dorrans landed perfectly for Youssouf Mulumbu whose cushioned cross fed the marksman to scramble home the Baggies’ fifth.

Lukaku entered the field in the 77th minute for the visit of Liverpool on the opening day of the 2012-13 campaign, rising to head home an excellent Liam Ridgewell cross to make it 3-0.

A goal he has scored many, many times since.

Lukaku already had a decent record against the red half of Merseyside when Everton snapped him up, and he brought that form to the big occasion for the Toffees.

His first in the heat of a derby came about following some good work from Kevin Mirallas and a composed, right-footed, side-foot finish from Lukaku.

Crazy to think there was a time when Lukaku was forced out wide by Steven Naismith. But that is what happened in this 3-2 defeat to City.

Still, his goal was a classic of the centre-forward genre, finding space between defenders to fire a diving header in off the inside of the post.

His only goal against a big-six side for the Red Devils fittingly came against Lukaku’s former employers.

Some neat build-up play from Jose Mourinho’s men led to the striker latching onto a neat Anthony Martial layoff before slotting home with his left foot. Slick.

Here are Lukaku's goal and Lingard's winner against Chelsea – What a win! 🔴 @ManUtd #mufc
pic.twitter.com/JdExd9mdrr

Liverpool fans have likely been waking up in cold sweats at the thought of Lukaku returning to the Premier League.

There is something so incredibly satisfying about a bullet header. That may just be because of how woefully bad I was at them whenever I tried to play football.

Anyway, after bullying Glen Johnson, Lukaku scored his second of the match at Goodison Park, giving the Toffees a 3-2 lead in the process.

A game undoubtedly remembered more for the brilliant debuts of Tom Davies and Ademola Lookman, it probably won’t surprise you that Lukaku also got in on the act.

In fact, he got the party started, side-footing a shot past Claudio Bravo to light the fuse on a 4-0 demolition of Pep Guardiola’s men at Goodison.

Lukaku managed to shake off the attentions of Jan Vertonghen ruthlessly here, his compatriot tumbling to the floor following a top piece of control.

A clear path to goal was now available and, of course, he made no mistake, firing expertly into the far corner with his apparently ‘weaker’ right foot.

A goal that gave us a glimpse into the confidence and audacity that would make Lukaku a world-class striker in years to come.

After entering the final match of the 2012-13 campaign as a second-half substitute, the 19-year-old curled a brilliant low shot into the bottom corner from 20-yards, catching Anders Lindegaard completely by surprise.

Starring in this edition of ‘Defenders Being Left For Dead By Romelu Lukaku’ is City’s Gael Clichy.

Faced with the French full-back, Lukaku breezed past him like he was Tony Hibbert and not a famously pacey player, before whipping a wicked shot across Bravo and into the bottom corner. Bravo, indeed.

Instinctive. Clinical. A goal that sums up Lukaku’s best assets better than most.

Seamus Coleman’s cross was woefully dealt with by Emre Can, the German international only able to belt a clearance at Martin Skrtel. The ball ricocheted off the Slovakian, and Lukaku reacted sharpest, taking one touch on his thigh before cracking a left-footed shot past Simon Mignolet and into the bottom corner.

The opening weeks of the 2013-14 campaign brought this gem from Lukaku against that season’s eventual champions.

Look away now Joleon Lescott. Running on to a long through-ball on the right side of the penalty area, a cheeky flick inside from the Belgian takes Lescott out of the game completely.

Hurrying on to the other end of it, Lukaku makes no mistake with the finish, squeezing his shot under the on-rushing Joe Hart.

This is the last one, Liverpool fans. I promise.

A cool finish with his weak foot secured a famous league double over the Reds for West Brom and also secured Lukaku’s status as one of the Premier League’s most exciting young talents.

Our 3rd Premier League victory in a row Vs Liverpool and 4th in 5 games came courtesy of a Foster Penalty save, McAuley header and some Lukaku trickery.#Wbapic.twitter.com/TftaR2TTqa

It is fitting that Lukaku’s finest goal against the big six came against the team he may well make his second Chelsea debut against on Saturday.

Collecting a sweeping Mirallas pass out on the right-hand side, Lukaku got his head up and planned his route. A slick shimmy and Nacho Monreal was left behind. A clever touch dodged the attentions of Thomas Vermaelen and a perfect snapshot arrowed in a second in the Toffees’ 3-0 rout of the Gunners.