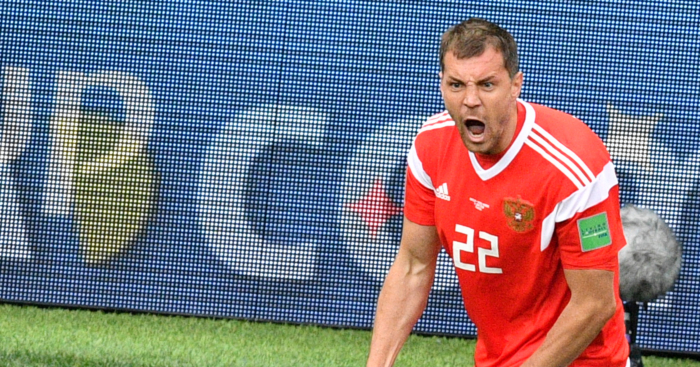 To the disappointment of many, Russia has vowed to deliver a hooligan-free World Cup, meaning there will be no repeat of those Euro 2016 antics.

So let’s instead consider how you — yes, you, Cross of Saint George daubed across your nose, you — would fare in a brawl with Russia’s actual football team.

Starting with ‘not very easily at all’, here are the members of Russia’s World Cup squad ranked by how easily they could beat you up.

Zhirkov is 34 years old and spent a not-altogether-insignificant period of his life sitting on the bench waiting for Florent Malouda to get injured. His butlers wouldn’t let him near you or you near him.

Yes, he just scored some very good goals but no, Denis Cheryshev is not a fighter. Schooled at Real Madrid? Born on Boxing Day? By some distance the shortest member of the team? Just leave Denis Cheryshev alone, why don’t you.

Reminder that Denis Cheryshev is responsible for the butterfly effect that led to Zidane getting the Real Madrid job and winning them their last three Champions League finals pic.twitter.com/ISyODw2CHq

Adorable! Just look at the 22-year-old Lokomotiv Moscow twins. The slightly heavier Alexey could take you, but you could take Anton, making this a non-starter.

Damaged cruciate and lateral ligaments kept Zobnin out of the Confederations Cup last year. Do with that information what you will.

CKSA midfielder Dzagoev seems to have been around forever, but only turns 28 on Sunday. Once described the not-very-fighty Frank Lampard as a role model. Injured.

Total wildcard. The Brazilian-Russian right-back, who is 27 years old, only started playing for Russia last year after winning a cap for Brazil in 2014. What that means in this context is anyone’s guess.

The opening match suggested Golovin is quite good at football. He is, however, Russia’s third-lightest player. Vulnerable.

Started the opening match, but not a threatening-looking man.

Based on his squad number, 34-year-old goalkeeper Gabulov shouldn’t get anywhere near the pitch at the World Cup, but he looks like he could handle himself.

Question is: has living in Bruges softened the shot-stopper? Question is: do you want to find out?

Woah, now we’re talking. Nicknamed ‘White Shark’, middleweight fighter Semenov has an MMA record of 34 wins, 9 losses and 2 draws. He is known for his strong submission defence and stamina.

Sadly, Semenov the MMA fighter is not the same person as Semenov the Akhmat Grozny centre-back — the one in Russia’s World Cup squad.

A midfielder who can play in the middle or on the right, Kuziaev waited five years to score the first professional goal of his career. Patient. Could — and might — beat you up.

Spent the first few years of his career in distant eastern Russia, turning out for FC Smena Komsomolsk-na-Amure and FC Luch-Energiya Vladivostok. Now enters the history books alongside Siphiwe Tshabalala (who wouldn’t beat you up).

Working against him: not very heavy for a defender. Working for him: a history of recognisable facial hair.

Earlier this week Kutepov vaguely threatened to re-injure Mohamed Salah, adding that he didn’t mind seeing him get injured in the CL final. Watch out for low blows.

Goalkeeper Lunev was rushed to hospital after being kneed in the head by Spanish forward Rodrigo last year. But here he is, in the squad, resilient.

Akinfeev was an absolute boss for several seasons of Football Manager but in real life went 11 years without keeping a Champions League clean sheet. I guess that means he could take you at Tekken…and maybe real life too? Maybe?

Fair play to Igor Akinfeev. Only 32 years old, yet somehow seems to have been playing professionally since 1990.

Zenit full-back Smolnikov may only weigh 11 stone but is the only member of the Russian 23 not smiling in his FIFA profile picture. That should alarm you. Are you smiling in your LinkedIn photo? Exactly.

I mean…the wordplay is there, obviously.

I want to be scared of Artem Dzyuba, the tallest and heaviest member of Russia’s World Cup squad, especially after his furious outpouring of emotion after that goal.

And yet the striker gives off a strong Pierre Bezuhov from War and Peace vibe, like he’s just bumbling around in his big frame trying to understand life a little better, and scoring headers at an awkward angle maybe doesn’t really help him do that, which makes him angry but also sad and pensive.

He could beat you up, but you’d probably get on and chat for hours.

Hey Artem Dzyuba, what does it feel like scoring a goal at the #WorldCup?

Smolov, one of only two strikers in the Russian squad, is very much in his prime, having scored 52 goals in his last three seasons for FC Krasnodar. Also — alarmingly, for you — claims to have read Mario Puzo novels in the original English.

Sergey Ignashevic sometimes looks like he’s struggling to move, but the big defender has spent 14 years at CSKA Moscow playing alongside Aleksei and Vasili Berezutski — football’s Klitschko brothers. He will turn 39 the day before he lifts the World Cup trophy, but Sergey Ignashevic could still beat you up.