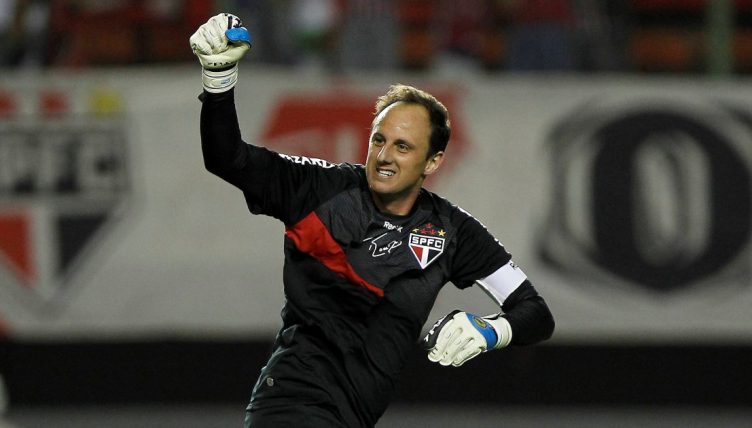 Goals from goalkeepers are one of football’s most wonderful moments. Like shiny football stickers, they are made all the more special by how infrequently they come along.

In South America, however, goalscoring goalkeepers are something of a tradition – there are plenty who have taken penalties over the years, and a few others who have rattled in their fair share of free-kicks and even found the net from open play.

Here, we have brought together 10 of the greatest South American goalscoring goalkeepers.

They are not perfectly ranked in order of their number of goals scored – although we have taken numbers into account – and there is no space for those who have only ever scored from the spot.

Instead, we have ranked them on how they scored and what else they contributed to the goalkeeping (loose) can(n)on.

One career goal pales into insignificance alongside some of the more prolific marksmen on this list, but it was an important goal, keeping Liverpool’s Champions League hopes alive, and it was a good goal too.

The way Alisson got up at the near post against West Brom was reminiscent of a seasoned striker. As Jurgen Klopp said after the game: “Unbelievable, the header. I never saw something like that. Insane technique… We’re still in the race, that’s all we can do.”

No, not that one. This one’s a Peruvian goalkeeper who spent his entire career in his homeland, playing for Sport Boys, Sporting Cristal, Sport Ancash and a series of other sporting institutions.

He’s in here for his numbers more than anyone else on the list, to be perfectly honest, but they are some numbers. Forty-five goals in total makes him the third-highest scoring ‘keeper of all time. At least nine of them came from outside the area by IFFHS’s count – and who are we to argue with them?

When he retired, Jose Luis Chilavert (to whom we will come shortly) called Vegas “a living legend of the football world”.

Here’s one of Johnny’s penalties set to some 1920s newsreel music.

A few of Hugo Suarez’s 15 career goals came from the spot, but he is not above Johnny Vegas for his penalties.

Suarez spent most of his career with Jorge Wilstermann in his native Bolivia and became a fan favourite for his fine free-kick technique.

From that space on the edge of the area where most players find it difficult to get it up and over, Suarez was an expert. The ball moves differently at Bolivian altitude; he knew how to take full advantage.

And even when he did hit the wall he had the answer. Extra points on this one for the tracksuit bottoms and the dad jog back to his own goal.

Having come through for Nacional in Uruguay and helped them to the domestic title, Arsene Wenger wanted to sign Viera in 2005, but after a cyst on his hip was discovered in his medical, the Gunners pulled the plug.

Viera moved to Villarreal instead, enjoying the club’s mid-noughties golden era, before settling in Colombia with Atletico Junior in 2011.

A decade, 534 games, seven trophies and 10 goals later, ‘the angel of the goal’, who has angel wings printed on the back of his shirt on either side of the No.1, is still there and still doing the business at the age of 38.

None of Viera’s goals have come from 12 yards, which is an admirable feat. And he has a penchant for putting it under the wall, which makes his efforts even better.

In fact, we’ve heard a rumour that those ridiculous human draught excluders every team puts behind the wall nowadays are a direct result of watching a free-kick he scored for Atletico against Barcelona (the Ecuadorian one) in the 2020 Libertadores. As we said, just a rumour.

Dudamel is a bona fide legend of Venezuelan football. His 56 caps made sure of that long ago, but then he took the Venezuelan Under-20 team to a World Cup Final against England as a manager in 2017 before permanently taking over the senior national team and considerably improving them too.

His finest single moment in the shirt of La Vinotinto came in 1996, though, when he curled a beautiful free-kick – one of 16 goals he managed while playing – into the top corner of Argentina goalie Pablo Cavallero’s goal.

It pains us a little to see Mr Higuita so far down this list. He had the full package, didn’t he? The barnet, the ‘tache, the ridiculous goalkeeper kits of the ’80s and ’90s. He could pass as well as anyone, he could dribble and he scored 41 career goals.

For all that he deserves to be on this list. But we are ranking not just the quantity of goal but how they are scored. Only four of Higuita’s 41 came from free-kicks, the other 37 all from 12 yards. For that, the Colombian super-haired superhero is only in fifth on this list.

Phan Van Santos played at international level for Vietnam but was born and bred in Rio de Janeiro.

After coming through at hometown club Vasco da Gama – where he was nicknamed ‘Sausage’ – he moved to Vietnamese side Dong Tam Long An in 2001 and stayed there for a decade, helping them from the second tier to back-to-back Vietnamese national titles and qualification for the Asian Champions League.

In 2006, he scored a 24-yard free-kick against Shanghai Shenhua in the Champions League and remains the only goalkeeper to have scored in the competition. A year later, he was naturalised Vietnamese and in 2008 played against Brazil in a warm-up friendly against Ronaldinho and co before the Beijing Olympics.

At the time, he told Globoesporte that he felt right at home in his adopted land, riding the streets of Hanoi on a motorbike and lapping up the adulation: “I feel like a local idol and the fans accept me in the national team… [The police stopped me on my motorbike] and they wanted to see documentation, but I told them I had nothing.

“The officer came up to me and asked what I would do, because I didn’t even speak English. In the end, he decided to let me go.”

In total, he managed 22 career goals – some of them veritable scorchers, and, as far as we can tell, no penalties. After playing for a few other clubs around Vietnam, he retired there in 2014.

Another little-known one from Brazil, but a prolific scorer and a scorer of great goals. Marcio managed 34 in total, mostly for Atletico Goianiense, for whom he played for a decade, helping them from the Brazilian Serie C to Serie A.

A fully-fledged free-kick master, he scored from all angles and distances, under, over and around the wall. This, from a full 35 yards, was one of his best. Generating this sort of power with a one-step run-up should be illegal.

The second-highest goalscoring ‘keeper of all time, Chilavert, who admittedly “wanted to be a centre-forward”, hit his penalties like you’d expect a ‘keeper to hit penalties, absolutely hammering them into the net with the laces of his rocket-powered left boot.

El Buldog was not limited to spot-kicks, though. Playing for Velez Sarsfield and Paraguay throughout the 1990s, Chilavert got his fair share of thunderbastard free-kicks and even scored from behind the halfway line in 1996. He is also one of only two ‘keepers to have scored a hat-trick in a professional game, which he bagged against Ferro Carril Oeste in 1999.

He was really modest about his achievements, too. “In the world, I will be impossible to replace,” he told Placar magazine after he retired. “Before [me], goalkeepers were only there to grab the ball, today it is different. I revolutionised the positions, there will never be a goalkeeper who better what I did.”

Since hanging up his gloves and shooting boots, he has unfortunately turned into a loudmouth Twitter wanker and all-round arsehole. He says he’ll run for president of Paraguay in 2023, which is an unpleasant prospect.

We can’t say we weren’t warned though. Chilavert did plenty to display his… err, fiery… temperament during his career. 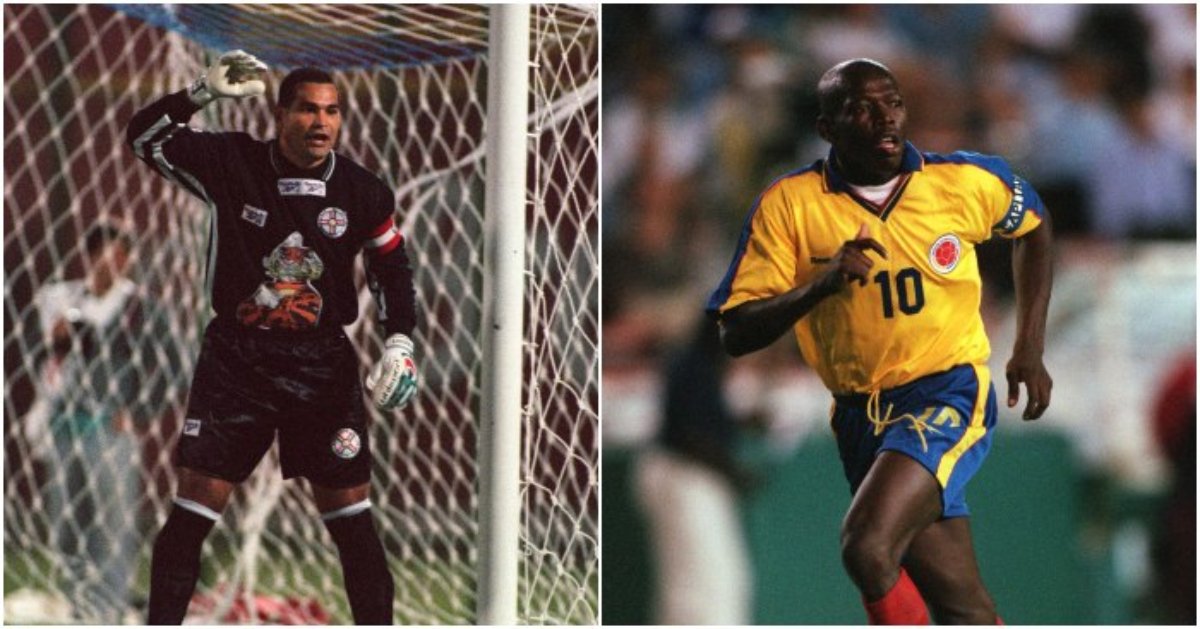 Right, we know we said this wasn’t just about sheer numbers, but you really can’t argue with this one, can you?

Rogerio Ceni is a proper legend of the game and deserves his place here not just for the quantity of goals, but for the quality. His free-kick technique was matched by few, goalkeepers or not.

The 62 he managed from outside the area during a 22-year career at Sao Paulo stand testament to that. He scored two goals in a game on five separate occasions and scored 21 times in a single season in 2005, leading his side to the Copa Libertadores and Club World Cup.

Ceni is now the manager of Flamengo, who he led to the Brazilian Serie A title in February 2021.