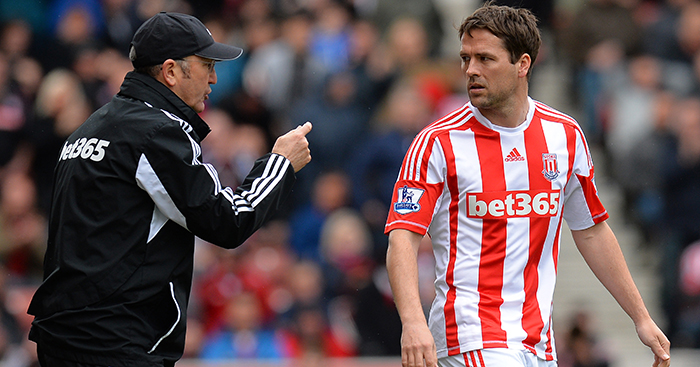 Stoke City knew exactly what they were under Tony Pulis, but that certainly didn’t stop them making several weird signings – and nor did they stop once he’d been replaced by Mark Hughes.

Stoke spent 10 unbroken seasons in the Premier League between 2008 and 2018, defying the doubters to survive in the early years under Pulis and then finishing ninth three times in a row under Hughes.

That isn’t to say they didn’t make plenty of signings that didn’t work out – the likes of Dave Kitson and Giannelli Imbula spring to mind – and as well as those which turned out to be bad signings, Stoke also made several which just seemed weird from the moment they were announced.

Stoke signed 10 players in their first summer following promotion to the Premier League in 2008, including three on deadline day. Clearly, Tony Pulis felt he needed a much bigger squad if the club was going to survive.

Or maybe he just thought ‘throw enough sh*t and something will stick’ – Tom Soares, Andrew Davies, Ibrahima Sonko and Amdy Faye were among Pulis’ other signings that summer.

Pulis described himself as a “long-term admirer” of Tonge after the deal had been confirmed, but clearly he wasn’t a big enough admirer to actually play the midfielder: Tonge started just one game in the Premier League that season.

That was still one more than he managed in his next four years with the Potters, however, during which time he was remarkably ‘rewarded’ with a new contract. 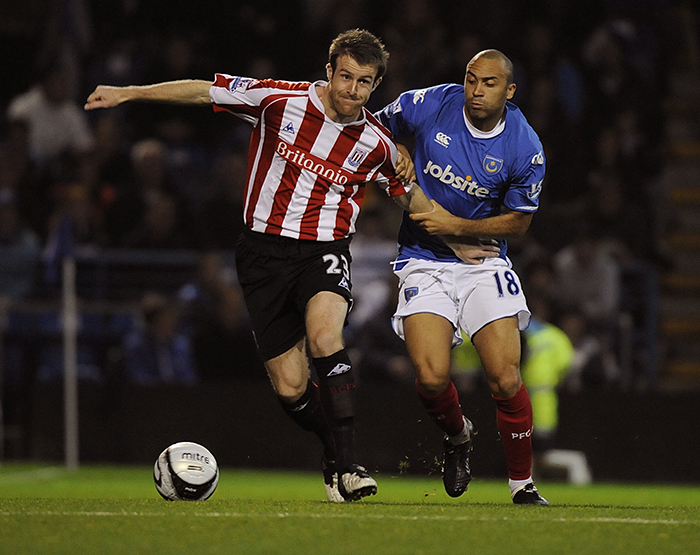 We dread to think what Pulis comes out with if he ever goes shopping in Aldi, but he made a habit at Stoke of making one really logical signing from a club and getting another at the same time because…well, just because.

In the summer of 2009, Pulis went to Middlesbrough to sign hard-as-nails, no-nonsense centre-back Robert Huth – and thought he might as well sign a floaty luxury player while he was there.

Unsurprisingly, Tuncay appealed to the supporters far more than he ever did the manager, having to wait until December for his first start in the Premier League.

The month before, he was brought off the bench in the 81st minute of an away game at Hull City with the score at 1-1 and had been subbed off again by the 87th as Pulis seemingly went for the win before deciding to settle for a draw. They lost 2-1.

Tuncay managed to make 13 starts in total that season and a further five in the first half of the following campaign, but not too many eyebrows were raised when he was sold to Wolfsburg in the winter transfer window after just 18 months at the club.

In fairness to Stoke and Pulis, most people thought they had pulled off something of a coup when luring Palacios to the club in 2011. Indeed, The Guardian described the double signing of Palacios and Peter Crouch from Spurs as an ‘ambitious £22m transfer swoop’.

Yet Palacios did not start a game in the Premier League until December and started only nine all season. A knee injury did not help, but when Pulis left him out against West Brom in January because it was “too windy”, it’s fair to say questions were starting to be asked about whether he ever wanted him in the first place.

Rumours were rife that Stoke had been railroaded into signing him by Daniel Levy as part of the Crouch deal, but Pulis insisted it was purely fitness-related and that Palacios would be a key figure the following season.

The Honduran made only four substitute appearances the entire campaign, amounting to 36 minutes, but at least he gave us ‘Roll Up Man’ on Sky Sports News.

As a cheap risk that didn’t pay off, Teixeira was no different to Jamie Ness or Jakkob Haugaard, who somehow still remains at the club.

But what was different about Teixeira was that the club had apparently been watching him “for some time”, with Hughes having previously had him on trial at Manchester City.

He underwent a trial at Stoke, too, and somehow did enough to convince the club to sign him on a three-year contract. He was released from it six months early after a grand total of two substitute appearances – though that was two more than any of the other players ever thought he’d make.

Tragically, in November 2017, having joined Moldovan club Sheriff Tiraspol earlier in the year, Teixeira passed away after a heart attack.

In the summer of 2015, Berahino was the subject of several bids from Tottenham Hotspur, the last of which was, according to Spurs, worth £25million.

The then-England Under-21 striker had scored 20 goals for West Brom the previous season, including 14 in the Premier League, and appeared destined for a big move sooner or later. So when Stoke (and Newcastle) tried to grab him in January, it made sense.

When they tried again in the summer, it still made sense. Berahino had scored only four goals in the Premier League that season, but he had upset Pulis, now at West Brom, in wanting to join Spurs and had seen his role reduced. He seemed like a player just in need of rescue.

However, after another half-season at The Hawthorns in which he was fined for being overweight, served a ban for failing a drugs test (unbeknown to the general public but not Stoke) and made only five appearances, failing to score, the warning signs should probably have been there.

Yet Stoke splashed £12miillion on Berahino in January 2017. He did not score his first goal for the club until August 2018, with Stoke relegated in the interim and Berahino made to train away from the first-team squad at least once for poor discipline.

In February 2019, Berahino was charged with drink-driving and facing another banishment, with Stoke seeking legal advice should they wish to terminate his contract.

Stoke striker Saido Berahino missed training after claiming he was ill prior to his 3am arrest for drink-driving | @LaurieWhitwell https://t.co/GYuoISN5q9 pic.twitter.com/f0l7paLmMI

May 2015 – Tottenham sign Kevin Wimmer from Cologne for £4.3million.

May 2018 – Stoke send Kevin Wimmer on a season-long loan to Hannover.

Spurs somehow made a £13.7million profit on Wimmer despite him starting only 10 Premier League games in two seasons. He started 14 for Stoke, but suffice to say they will not be making a profit.

In 2012-13, Stoke signed not one, not two, but three American players, following up the summer signings of Geoff Cameron and Maurice Edu with the January capture of Shea for a not-insignificant £2.5million.

It came shortly after Stoke had appointed a technical director in the shape of Mark Cartwright, who left football agency Beswicks Sports to take up the role.

Purely by coincidence, Shea was represented by Beswicks Sports.

In two and a half seasons at Stoke, Shea made a grand total of three substitute appearances in the Premier League, two of which came within the first month or so of him joining.

He only even made it into the matchday squad for a further three Premier League games and is probably best remembered for posting a picture of a pig’s head on Instagram, which it emerged had been accidentally placed in Kenwyne Jones’ locker (it was meant for Glenn Whelan), leading to Jones putting a brick through Whelan’s car window. 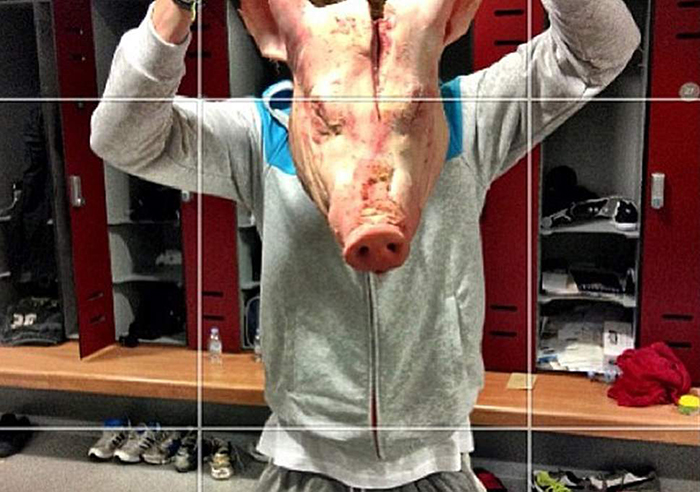 In 2011, despite already having a settled pairing in Ryan Shawcross and Robert Huth, Pulis decided to sign not one but two experienced centre-backs in Woodgate and Matthew Upson.

Unsurprisingly, Pulis quickly discovered that four into two did not go, leading to Woodgate humiliatingly being hooked after just 19 minutes of an away game at Wolves in which he had started at right-back and been torn to shreds by Matt Jarvis.

He left for Middlesbrough at the end of the season.

If Pulis had learned any lesson from signing Tuncay in 2009, it clearly wasn’t that he couldn’t accommodate a No.10 in his side who didn’t win lots of headers and help out in midfield.

It wasn’t even like Pulis could have forgotten what had happened with Tuncay – he was still at the club when Pulis decided to sign Gudjohnsen too a year later.

He couldn’t even shoehorn Gudjohnsen into the team on the wing so moved him on after just half a season in which he made four appearances in the Premier League, all as a sub. 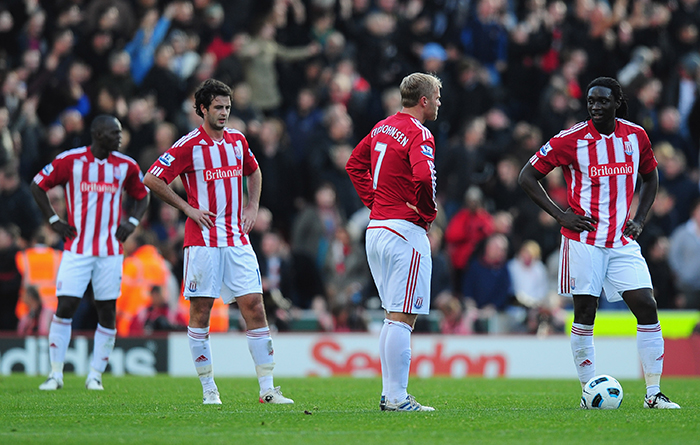 Pulis really did not learn his lesson. We’re not saying he liked signing famous names without any thought as to how he could actually fit them into the team…but what other explanation was there for him signing a 32-year-old Michael Owen who had lost his pace, wasn’t sprinting to avoid getting injured and so just hung around the penalty area waiting for good service?

Surprise, surprise, he failed to start a single Premier League game for the club and retired at the end of the season.

In August 2013, as part of their continued love affair with Americans, Stoke announced USA striker Juan Agudelo had signed a pre-contract agreement to join the club the following January.

Just 20, Agudelo had already won 17 caps for the US senior side, yet when Stoke applied for a work permit for him in November ahead of the transfer being completed, it was denied.

Undeterred, City signed him anyway in January and loaned him out to FC Utrecht for the remainder of the season while they waited for the chance to re-apply for a work permit.

They did, it was turned down again, and Stoke cancelled Agudelo’s contract that summer without him ever making a single appearance.

Pulis didn’t sign too many foreign players while at Stoke and was sacked at the end of his first spell of the club for failing to even consider the overseas market.

So it was more than a little surprising in August 2009 when it was announced the Potters had signed a player hardly anyone had ever even heard of from the Uruguayan league.

Arismendi, it seems, was signed purely on the recommendation of Pulis’ trusted assistant Dave Kemp, who had been doing some scouting in South America

Zero Premier League appearances in four years probably explains why Kemp later returned to his role as assistant. One of the few times anyone even remembered Arismendi existed was when he was branded a “noise pest” by a disgruntled neighbour in February 2010.

You might not think an American would need a buddy to settle into a club in England, even in his first move across the Pond, but that remains the only logical explanation for Stoke signing Edu in August 2012, a few weeks after signing Geoff Cameron from Houston Dynamo.

He certainly wasn’t signed for what he could do on the pitch – in two seasons at the club, he made only one 10-minute appearance as a substitute.

Still, Cameron turned out to be a hit in the Premier League, making 168 appearances in the competition across six seasons, so maybe Edu achieved exactly what he was brought in for.