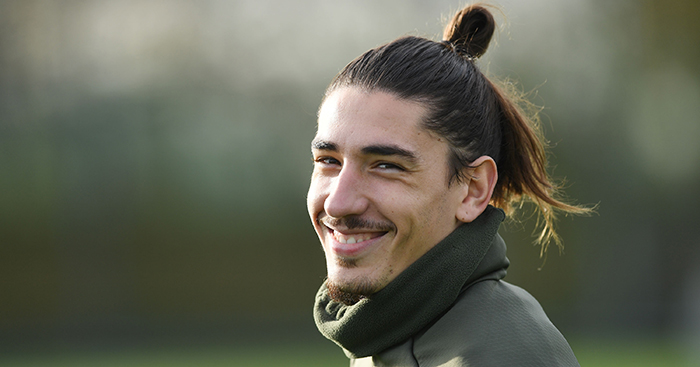 Marouane Fellaini pulling Mattéo Guendouzi’s hair was one of the best moments of the season so far. But are those players’ barnets among the best or worst in the Premier League?

You knew something weird was going to happen when Arsenal visited Old Trafford. Tensions were high, bookings were numerous and Manchester United were playing some of their most Mourinho football.

Would there be a red card? An off-the-ball incident? Managers sent to the stands?

What happened was stranger than any of those things. Marouane Fellaini — former owner of the league’s most iconic haircut — yanked the locks of Arsenal’s Mattéo Guendouzi, bringing the teenager to the ground.

It was truly the best moment of the game, elevating a pulsating 2-2 draw from ‘very good’ to ‘great’.

Credit to Guendouzi, who actually had the maturity to take the high road, making light of the incident after the match.

“I think there is a bit of jealousy there,” he said. “Maybe [Fellaini] can’t accept the fact that he chose to go back to short hair!”

But the incident also got us thinking.

Both Fellaini and Guendouzi are known for their unusual grooming choices. But how do they rank among the Premier League’s best and worst barnets?

Arsenal’s Mesut Özil didn’t get the chance to pull hair on Wednesday. Fortunately, he is pretty good at combing it, having shown off a sensible, medium-length cut since arriving from Real Madrid five years ago.

There are many reasons why a football manager’s daughter would fancy Wilfried Zaha, and one of them is his haircut.

“A haircut will take me from a 5 to a 10, a sharp haircut,” Zaha said earlier this year. “Trust me: a fade will make you a different person.”

Let’s just take a moment to appreciate that Aubameyang is a grown man who still thinks it’s cool to shave stars into his hair.#FPL #ARSTOT pic.twitter.com/1rtjbsSv2l

If you were to ask yourself: ‘Does Pierre-Emerick Aubameyang’s haircut make him look better than a normal haircut would?’ you could not truthfully answer yes.

Nor is it particularly suitable for a man pushing 30. If you were going to marry Pierre-Emerick Aubamayang and he turned up at the altar with this hair, you would be sorely disappointed.

In truth, Aubamayeng’s hair can only really be described as ‘having stars in it’.

And you know what? That’s good.

Here’s something to make your head hurt: Mamadou Sakho is only 28 but captained PSG in 2007. He also has a brilliant mohawk thing which is both very punk and very Crystal Palace.

Tattoo aside, Leroy Sané is incredibly cool. He stays on this list until Riyad Mahrez tricks him into that inevitable peroxide job.

Unai Emery has a difficult decision to make when picking his wingers. Does he go for a) Henrikh Mkhitaryan, who looks like a downtrodden accountant trying Rogaine for the first time, or b) Alex Iwobi, the dictionary definition of ‘youth’?

It's not a costume, it's a lifestyle.

Yes, there are a lot of Arsenal players on this list.

Bellerín sort of gets in on a technicality, because he has shit facial hair but a stunning barnet on top. And before you object, remember that Lee Dixon — half man, half forehead — once played in his position.

Tough game, we keep focused and on to the next @manchesterunited #mufc

“Granted, a hairstyle is not going to determine how well he can control a ball or make a pass, but it does say something about where his mind is at the moment.

“If you are going to attract attention to yourself on a football pitch, do it with goals and performances, not cheap gimmicks and marketing tricks.”

Look, there’s nothing inherently wrong with Mattéo Guendouzi’s hair. But football is a cruel game, and Arsenal’s trip to Man United showed why this kind of cut isn’t the most sensible option for a footballer.

This feels mean. But why did he get a hair transplant?

During the 2016-17 season, Silva sported a full head of boyish hair. But come August 2017, the midfielder rocked up to training with a bald head and visible scarring.

Antonio Conte and Jürgen Klopp may be football’s hair transplant poster boys (men?), but Silva’s attempt should serve as a cautionary tale.

The problem with Sergio Agüero’s white-blonde hair isn’t so much how it looks but that he chose to do it this season. This is the era of Soundcloud rap, Sergio, not of Mark fucking Ronson 10 fucking years ago.

Also, Sergio Agüero is now 30 years old. In no other line of work would this kind of stylistic left-turn be acceptable. At best, he could expect at an informal warning.

Sadio Mané seems like a really nice guy, but he doesn’t have a great haircut.

Roberto Firmino seems like a medium-nice guy, but he has a terrible haircut.

This is maybe a little unfair since Eriksen’s mop is obviously thinning out, but what on Earth? There’s no getting away from the fact that Christian Eriksen looks like Limmy.

Whatever the question, this is not the answer.

Theory: Ben Davies has never seen a photo of himself from the back or side.

Evidence: From the front, Davies’ haircut — fringe swept to one side — probably looks fairly tidy. But when you see the Tottenham defender in profile, everything is just wrong. The crown sticks up like the pate of a baby bird, the fringe affixes firmly to the forehead.

Someone needs to have a word with Ben Davies.

A few years ago, a photo of a group of young lads went viral.

In the photo, there are five boys — probably around 15-16 years old — encircling another boy, their hands outstretched toward the central figure.

The central figure’s hair is on fire. 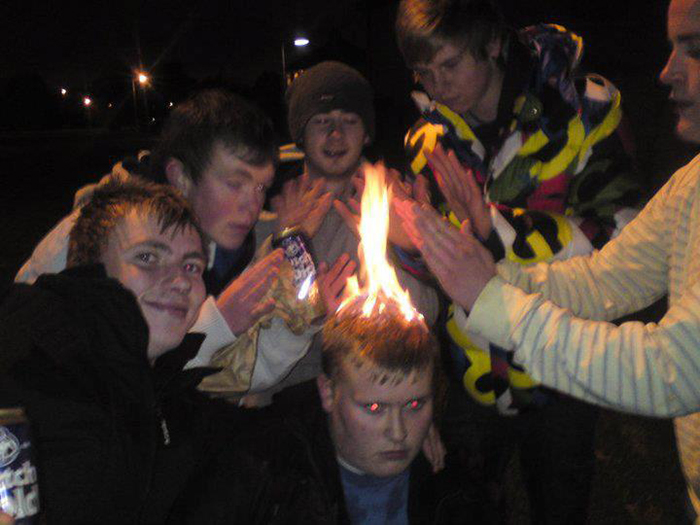 Once you’ve seen this image, you’re unlikely to forget it. Not necessarily because of the flaming head, but because you almost definitely see your younger self in those pink-faced, warmth-seeking lads, all River Island jackets, stolen tobacco and never-to-be-used wallet condoms.

Most British men born between the late 80s and mid 90s will be uncomfortably familiar with the haircuts — ignited or otherwise — in the photo: too long at the sides, handfuls of wet-look gel used to flatten the fringe, back sticking up messily.

There are echoes of Ben Davies, but for these lads it’s 100% intentional.

Did it just snowball into popular culture? Can you even ask for it at the barber’s?

This was the worst haircut you had as a 15-year-old, and Jamie Vardy still fucking has it.

Good performance today from all the lads. Thanks for your support. #ThreeLions 🦁🦁🦁