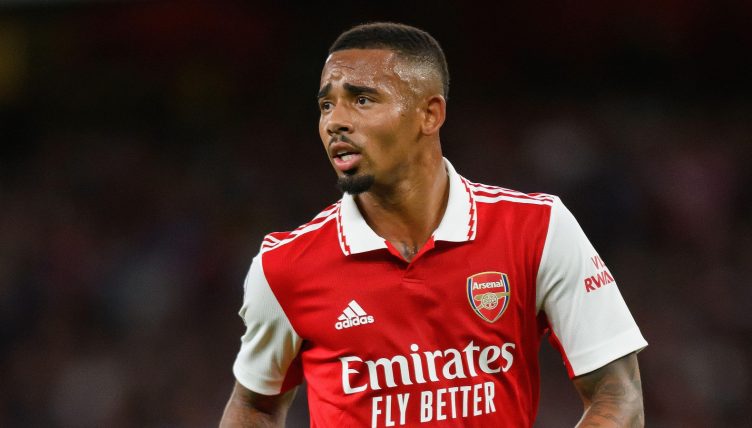 Gabriel Jesus is the current incumbent of Arsenal’s famous No.9 shirt – but how have his predecessors fared?

Arsenal has been the home to some of the Premier League’s greatest goalscorers but the likes of Thierry Henry and Ian Wright didn’t wear their No.9.

There have still been a few success stories to have donned the famous squad number in the red half of north London, but there have also been a few flops.

We’ve ranked every player to wear the No.9 for Arsenal in the Premier League since squad numbers became permanent in 1993.

When we began compiling this list we were willing to cut Park some slack, thinking he was one of those typical Arsene Wenger punts on a young player with potential during a period of relative austerity at Arsenal.

But then we remembered the striker was 26 and had just been relegated with Monaco when he was handed the No.9 shirt ahead of fellow Arsenal legends Marouane Chamakh and Nicklas Bendtner.

Park’s debut campaign amounted to one goal in six appearances before he was stripped of the squad number and sent packing.

After three seasons as a promising teenager at Everton, Jeffers joined Arsenal in an £8million deal in 2001, with a further £2million in potential add-ons. To put that into context, Thierry Henry cost the Gunners £11million two years earlier.

Jeffers did not have quite the same impact as Henry at Highbury, struggling with form and fitness, and returned to Everton two seasons later with eight goals to his name in all competitions.

Arsenal’s signing of Perez from Deportivo in a £17.1million deal went under the radar somewhat in 2016, but it seemed like good business at the time: a pacy, direct forward coming off the back of a 17-goal season in La Liga.

However, despite a 39-minute hat-trick in a Champions League victory at Basel, Perez never established himself in Wenger’s first-choice starting XI, and he returned to Deportivo on loan after Alexandre Lacazette swooped in to take the No.9 shirt away from him.

He described the move as an “ugly gesture” in an interview with Spanish outlet La Voz de Galicia, adding: “The thing of taking the shirt number without telling me to give it to a companion, it seems to me the last straw.

“I can not continue this way. I have given everything, but that has not been reciprocated, so I can’t stand it any longer.”

Given he’s since had underwhelming spells at West Ham, Alaves and Elche, he’s not exactly been missed – but we have bags of respect for returning to his beloved hometown club Deportivo La Coruna in the Spanish third tier in a bit to help them get back to where they belong.

Those of us familiar with FIFA and Football Manager were quite excited by Baptista moving to English football with a loan move to Arsenal in 2006.

Sadly, the former Brazil international seemed to try to cram a season’s worth of excitement into two League Cup games.

The one-time Sevilla hitman is best remembered for scoring four goals at Anfield in a League Cup clash in which he also missed a penalty, while he also struck twice in the semi-final clash against Tottenham having already put through his own net.

12 years ago today, Arsenal beat Liverpool 6-3 at Anfield. Júlio Baptista scored 4 times. It was the first time in 75 years that Liverpool conceded 6 at home. pic.twitter.com/6f78U5M1J3

Given the reputation he developed after finishing as the top scorer at the 1998 World Cup with Croatia, plus that chip against Denmark at Euro 96, much more was expected of Suker.

He had the difficult task of competing for game-time with Henry, Dennis Bergkamp and Nwankwo Kanu but still scored 11 goals in all competitions in 1999-00 – one more than Bergkamp.

Sadly, his last act for Arsenal was to miss their first penalty in the shootout defeat to Galatasaray in the UEFA Cup final.

Smith is an Arsenal hero, but his best days as their No.9 came before the advent of permanent squad numbers.

Across the two seasons that the shirt was his, he scored just five league goals, although he did bag the excellent winner in the 1994 European Cup Winners’ Cup final against Parma.

After joining from Sevilla in January 2004, Reyes made an eye-catching start to life at Arsenal, scoring a brace to knock Chelsea out of the FA Cup and a crucial equaliser at Portsmouth to ensure the Gunners’ invincible status.

The former Spain international went on to score in his first six appearances of 2004-05 but flattered to deceive from thereon amid reports he was homesick.

Reyes was later the victim of a prank phone call in which he told a radio DJ who he thought Real Madrid sporting director Emilio Butragueno: “I wish I was playing for Real Madrid.”

“If I’m not [playing for Real] I’m going to have to carry on playing with some bad people,” he added.

A sad story, Eduardo was proving himself to be one of Wenger’s best bargain buys with 12 goals to his name by February of his first campaign in England football before he suffered a horrific leg break in an infamous clash with Birmingham City.

The injury kept the Brazilian-born Croatia international sidelined for 12 months, and he ultimately failed to recapture the form which had made him such an exciting goalscorer.

Being able to hit the ball extremely hard with your left foot and being generally quite fun gets you into fifth on this list.

Thirty-one goals from two-and-a-half seasons spent mainly operating from the flank is not to be sniffed at, either.

"I would've loved to stay at Arsenal for a couple more years, I felt great there.

"The team, the stuff around the team – everyone at the club was so friendly, like a family. Great fans, great city, the stadium – everything!"pic.twitter.com/Nljy6IwFJy

More of a midfielder rather than a traditional No.9, Merson wore the shirt for two seasons between 1995 and 1997.

In an article for ESPN, author Nick Hornby wrote of the collective shock when Wenger decided it was time to move Merson on in 1997.

“‘Paul Merson! We love Paul Merson! And he’s not good enough? Bring it on!'” wrote Hornby, before concluding: “And Wenger did.”

It just so happens the man who took over the No.9 shirt upon Merson’s departure is still to come in this ranking…

After leaving Lyon and joining Arsenal for a then-club record £46.5million in the summer of 2017, Lacazette constantly divided opinion during his five years at the Emirates.

He often struggled with inconsistency and was often overshadowed by team-mate Pierre-Emerick Aubameyang, who arrived at Arsenal a few months after him.

But the France international was named their Player of the Year in 2018-19 and then started in the 2020 FA Cup final, helping the Gunners win the first trophy of the post-Arsene Wenger era.

The striker scored 71 goals in 206 appearances before returning to Lyon in 2022 and that was a decent return considering Arsenal’s relative struggles over that period.

By the end though, it was definitely necessary for Arsenal for move on and replace him with a more dynamic, mobile forward. Which brings us to…

We’re possibly jumping the gun a bit placing the Brazilian so high, given he’s made just 14 Premier League appearances at the time of writing, he’s been injured for a while and Arsenal don’t appear to have suffered with Eddie Nketiah in his place.

Five league goals in those 14 appearances isn’t a stellar record, either, but to focus on his goalscoring is doing a disservice to everything else Jesus offers.

His arrival seemed to be a major reason for Mikel Arteta’s Gunners taking a major leap forward this season, and with leading the line with his intelligent movement, Arsenal have produced their best football since god knows when. He’s also notched five assists this season so far this season.

If Jesus can return to play as well as he did before to lead Arsenal to the title, we’ll have to bump him up a place to number one. What a signing.

It may be scrappy but a goal is a goal…

Gabriel Jesus nets his first goal in a north London derby to put Arsenal in the lead!! ❤️ pic.twitter.com/8z8EqtRxBF

Signed as a £500,000 unknown from PSG in 1997 and sold two years later as a £22.3million superstar to Real Madrid having won the Premier League and FA Cup.

“Listen, for me people do not mention him as they should mention him,” Thierry Henry, a man who knows a thing or two about being a great Arsenal forward, told Sky Sports in 2018.

“He was one of the best strikers we have seen in this league.”

READ NEXT: Bergkamp’s greatest first touch isn’t that one…or that one – it’s this one