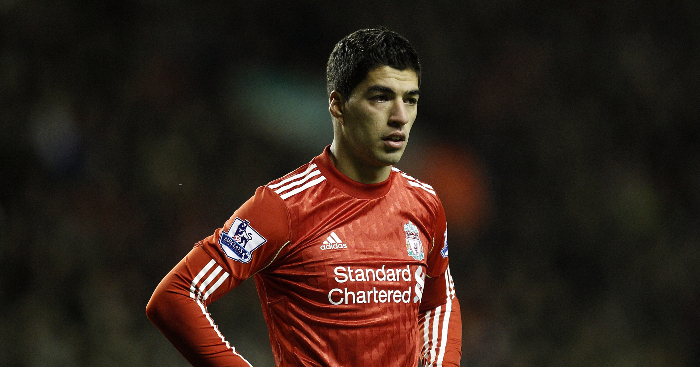 Liverpool have always signed players from all across the world – and they’ve recruited some great talents from South America.

Anfield has been the home to an influx of South American players over the last 15 years, but for every Luis Suarez there was a Doni.

We’ve ranked every South American player to play in the Premier League for Liverpool from worst to best.

Doni signed for Liverpool on a free transfer in 2011 and mainly served as the back-up goalkeeper to Pepe Reina.

The Brazilian managed just four Premier League games for the club, receiving a red card and conceding a penalty against Blackburn Rovers on his second appearance.

He left the Reds in 2013 and later revealed that he had suffered a heart attack during a routine medical in the summer of 2012.

“I almost ended up on the other side. I had a heart attack for about 25 seconds,” Doni told CalcioMercato.com in 2013.

“I always had an arrhythmia and during some tests in Liverpool suffered a cardiac arrest. I’ve been to one of the best doctors in Europe who looked at me carefully.”

Paletta moved to Anfield for £2million in 2006 after playing a significant role in Argentina’s victory in the 2005 World Youth Cup.

The centre-back made just four Premier League appearances for Liverpool before returning to Argentina with Boca Juniors in 2007.

Pellegrino became the first South American to play for Liverpool when he joined the club on a six-month deal in January 2005.

He was cup-tied for the Champions League and made 12 Premier League appearances, but his performances were not enough to secure a longer contract.

The former Argentina international returned to Anfield as a first-team coach before later turning to management.

Pellegrino impressed as Liverpool hung on to win a Merseyside derby with 10 men, but he left the club after just 13 appearances over six months

Coates joined Liverpool from Nacional in 2011 and was tipped for a bright future at Anfield.

The centre-back scored a memorable scissor kick against QPR, but his path into the first team was blocked by Daniel Agger and Martin Skrtel.

After making just 12 Premier League appearances for the Reds, Coates was sold to Sunderland in 2015.

Liverpool had to wait a year to secure the Chilean’s work permit, but he really wasn’t worth all the hassle.

Injury problems limited Gonzalez to 25 Premier League appearances and the winger left for Real Betis after just one season in England.

Insua joined Liverpool from Boca Juniors in 2007 and finally had his breakthrough season in 2009-10, making 31 Premier League appearances.

But the left-back was deemed surplus to requirements by Roy Hodgson and was eventually sold to Sporting Lisbon in 2011.

“It was sad for me to leave because I was feeling really well at Liverpool,” Insua told the Guardian in 2019. “I wanted to stay but Hodgson told me I will not play [under him].

“I was young and I wanted to play, so I left. Hodgson then signed Paul Konchesky to be the left-back but Konchesky did not do well for Liverpool … maybe I should have stayed.”

Having won two La Liga titles under Rafa Benitez at Valencia, Aurelio re-united with his former manager and joined Liverpool on a free transfer in 2006.

The Brazilian established himself as the first choice left-back at Anfield but injury problems would plague his six years with the Reds.

He’ll always have that goal against Manchester United though.

Rodriguez arrived on a free transfer from Atletico Madrid in January 2010 and instantly became a fan favourite at Anfield.

The winger came to prominence towards the end of the 2010-11 season, scoring two Premier League hat-tricks in the space of a fortnight against Birmingham City and Fulham.

He then fell out of favour under Kenny Dalglish and returned home to Argentina to sign for Newell’s Old Boys in 2012.

After a slow start to his Liverpool career, Fabinho has become one of the best defensive midfielders in the world.

The Brazilian is now an integral member of the team and ended his first season at the club with a Champions League winner’s medal.

Liverpool spent £67million on Alisson in 2018 and Brazil’s No.1 has more than lived up to his price tag.

The goalkeeper replaced Loris Karius at Anfield and has transformed the Reds rear guard into one of the best in Europe.

Of the 58 Premier League games he’s played at the time of writing, he’s kept 31 clean sheets, conceded only 33 goals and lost just twice.

Liverpool signed Coutinho from Inter Milan for just £8.5million in 2013 and that proved to be an astute piece of business.

The Brazilian developed into one of the best midfielders in the world during his five-year stint at Anfield, scoring 41 goals in 152 Premier League appearances.

He was eventually sold for £142million in January 2018 and the Reds used that money to sign Virgil van Dijk and Allison.

Lucas was a incredible servant to the club, racking up 247 Premier League appearances during his 10 years at Liverpool.

The midfielder had a difficult start to his Liverpool career but eventually won the fans over, picking up the club’s Player of the Year award in 2010-11.

After falling down the pecking order under Jurgen Klopp, Lucas decided to join Serie A giants Lazio in 2017.

Mascherano originally joined Liverpool on loan from West Ham in January 2007 and that was turned into a permanent deal in 2008.

The Argentine formed a sensational midfield trio alongside Steven Gerrard and Xabi Alonso at Anfield and helped the Reds finish second in 2008-09.

However, he moved to Barcelona in 2010 in dramatic circumstances after refusing to play for the club.

“It was very sad for me to leave Liverpool in the way that I did because being with them was one of the best moments in my life,” Macherano told the Times in 2014.

“The people treated me really well and I would never want to let them down. I wanted to leave in another way, but they didn’t give me the chance to.”

Firmino arrived at Liverpool in 2015, but they didn’t see the best of him until Jurgen Klopp arrived at Anfield a few months later.

The striker is the perfect embodiment of Klopp’s football and combines his eye for goal with outrageous skill and a remarkable work-rate.

There was only going to be one winner…

Suarez only spent three-and-a-half seasons at Anfield, but he was nothing short of sensational.

The striker scored 69 goals in 110 Premier League appearances and came so close to inspiring the side to the 2013-14 title.

He then signed for Barcelona in 2014 and went on to win the lot in Spain.