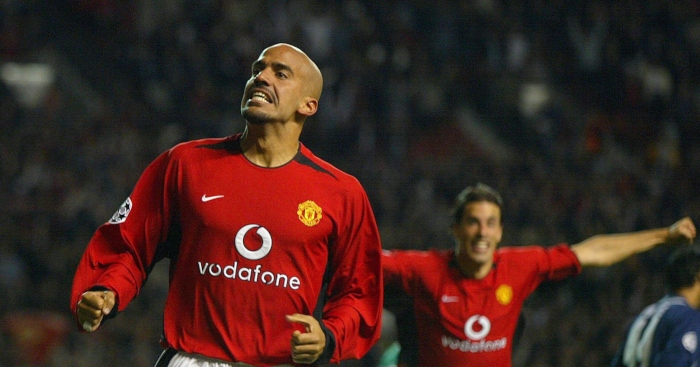 For all the British players who have played an integral part in their success, Manchester United have never been afraid to look further afield in their pursuit of Premier League glory.

French forward Eric Cantona and Danish goalkeeper Peter Schmeichel played their part in United’s first title under Alex Ferguson in 1993, while their final league success under the Scot was built on the back of a Dutchman, Robin van Persie.

However, over the years, the club has also recruited some great talents from South America… some more successful than others.

Before we begin, a couple of brief notes on players who haven’t been included on the list.

Without further ado, then, here are the magnificent seventeen.

Signing one of the most prolific strikers in the world and turning him into a very ordinary player is bad, but seeing him return to his best after leaving is enough to suggest you really messed up.

Falcao didn’t stop being good when he arrived in England – he just stopped being good for the specific period of time that he spent in England, most of which was at Old Trafford.

The Colombian scored two goals in three games for Monaco before joining United on loan in 2014, followed by four in 31 for the English club.

After returning to the Principality (via a loan at Chelsea which we don’t like to talk about), he ended the 2016-17 campaign with 27 goals at a rate of one every 110 minutes. Was he just allergic to rain?

When David Beckham left for Real Madrid, United had a decision to make. Either they could bring in someone with Premier League experience or take a punt on someone who had a good international tournament a year earlier.

Ferguson clearly hadn’t been put off by the latter option failing him when Karel Poborsky arrived in 1996 (and failed to keep a young Beckham out of the team) and moved for Kléberson – also known as “the other guy in that Brazil squad”.

His last goal for the club came n 2003, yet he was still on their books 18 months later, finishing with a whopping 20 league appearances.

Did pretty much nothing in a United shirt. The fact that this doesn’t leave the Uruguayan bottom of the list says it all. He played four league games, including the defeat at Bournemouth which saw Junior Stanislas score direct from a corner.

Look, we all wanted him to do well. He’s got a really nice face and he tries his best. Also, though, he wasn’t quite good enough to make the cut at Old Trafford. He found his level with Middlesbrough, before joining Nantes in 2018. Good for him.

Another polite young man with a kind face. Will probably also end up at Nantes, but he isn’t there yet so he has the glory of 11th spot.

It really should have worked out. He scored that beautiful goal against Leicester and looked like he’d be a real world-beater at Old Trafford, but off-field matters got in the way and he was allowed to leave the club for a substantial loss just a year after arriving.

Rojo making the top 10 is a pretty damning indictment on the rest of the players on this list, but we found it hard to put him any lower.

After all, the Argentina World Cup hero might have gone off the boil in Manchester, but he did at least provide a solid defensive option for a couple of years after his arrival. If he had left the club in 2017, few would have any complaints about his position on this list.

RT if you think Rojo is better at making toast than playing football. pic.twitter.com/XOlL9LeJQZ

A fairly derided player in his first season at Old Trafford, Fred’s reputation has been slowly rising over time.

He still rarely puts in the kind of performances you’d expect from a £47million signing – although is that even expensive anymore? –  but he’s got age and time on his side.

The second-choice goalkeeper hasn’t kicked up a fuss at having to play back-up to David de Gea and has come up with the goods whenever he has been called upon.

He was rewarded for his patience with a start in the 2017 Europa League final, justifying his selection with a clean sheet in the victory over Ajax, He’s made more than 50 United appearances, despite playing just seven times in the league, and the club could do worse than keep him as first choice if De Gea ends up leaving.

The hefty transfer fee United paid for Veron will be enough for plenty to dismiss him as an outright flop, but the Argentina international had his moments.

The highlight is his part in a victory at White Hart Lane in 2001 when Spurs led 3-0 at half-time but United fought back with five unanswered second-half goals, the fourth from the former Lazio midfielder.

Yes, there was that long goal drought after his arrival, but then we had the big winners against Liverpool and Chelsea in the Uruguayan’s first full season. He’s still sung about today for those two goals that “made the Scousers cry”.

He might not have been as prolific as others, but he only cost £6.9million, and one goal every six games isn’t the worst return for such a fee.

Anderson didn’t live up to his billing as one of the brightest young players in the world, but he was always entertaining, and that’s worth something.

Argentina international defender. Comfortable at left-back or centre-back. Bit of a nasty streak when he fancied it… based on Heinze’s success, you can understand why United were prepared to take a punt on Rojo years later.

Heinze started stronger than he finished, scoring on his Premier League debut but never achieving the feat again. He still made a good fist of his time in England, though, and was popular enough when on United’s books.

Valencia’s stock at United as fallen as time as gone on, but the Ecuadorian has been a faithful servant for more than decade, racking up more than 300 appearances for the club, including a shift from winger to full-back which was so seamless you barely even noticed it.

Oh, and he’s even learned to use his left foot – he just chooses not to, sometimes.

A prominent figure in and around the first team for years, and one of the bright shining lights at a time where United were often more functional than actively exciting, Rafael was immensely popular with the fans.

He was also pretty good at football, too, getting up and down the right-hand side and giving his all whenever he stepped onto the pitch.

Despite leaving for Lyon in 2015, he still holds the club dear to his heart, and this may well be why he remains so popular. Had Ferguson not retired in 2015, he might well still be around to make the gap between second and third even wider.

You’d think there would be more competition for the top spot, but it’s hard to look past Tevez.

The former West Ham forward might have only spent two years at Old Trafford, before removing any goodwill by helping City win the league in 2012, but his two seasons at United brought two league titles and Champions League success in 2008.