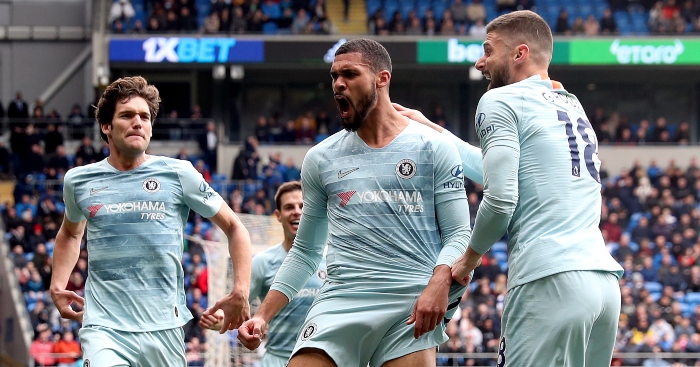 It’s called ‘the beautiful game’ for a reason, and it’s easier to get behind a team when it’s full of good-looking players. We don’t make the rules.

So, without further ado, here’s our entirely correct ranking of Premier League clubs, from the worst-looking squad to the best.

Sean Dyche looks like a hitman doing one last job before retirement who finds himself tasked with protecting a young girl whose mysterious powers may just hold the key to mankind’s survival pic.twitter.com/X9eLu9CUw5

Oh wait, Begovic is technically still on their books, they’re no longer last.

Jack Rodwell has the whole Hollyoaks heartthrob thing going on, but we had to Google a lot of the others to find out what they actually look like.

Danny Welbeck lifts them off the bottom on his own, kind of like the opposite of what’s happened in the actual football.

Overall, their squad is about as good-looking as it is consistent on the pitch, meaning… yeah.

Alireza Jahanbaksh is in the top five for the entire league, while if our Tinder experience tells us anything it’s that 6’7″ Dan Burn is a catch.

Beyond that, though? Not a lot.

No Charlie Austin, no party. And they’ve sidelined handsome Maya Yoshida for the crime of ‘not being good enough to start in a Premier League defence’.

Jannik ‘Game of Thrones central casting’ Vestergaard is still around, though, and that counts for something.

Poor Manuel Lanzini and Robert Snodgrass, having to prop up that squad.

They’ve taken a step back after losing high school heartthrob Chicharito, though, and now-departed goalkeeper Roberto was terrible on the pitch but does at least have a good face.

Harry Maguire is not someone you’d consider an upgrade in the handsomeness stakes, but, yes, Phil Jones is still there.

Paul Pogba and Juan Mata keep United firmly in mid-table, but this is not a Champions League squad in so many ways.

Ayoze Perez is an upgrade on more or less anyone, while James Maddison is handsome in an extremely bland way.

Kelechi Iheanacho is the star of the show, though – no wonder they’re known as the Foxes.

Fabian Schar and Jamaal Lascelles are in contention for best-looking centre-back pairing in the league.

The further forward you go, though, the worse things get. A bit like the Magpies in general, then.

Christoph Zimmerman’s cheekbones are a fine addition to the league, while Emi Buendia has big ‘lad your girlfriend slept with on her gap year and you weren’t even mad’ energy.

It’s quality over quantity for the Canaries, though.

Liverpool have made the smart move of adding other club’s eye-candy, specifically Adrian from West Ham and Takumi Minamino from Salzburg.

Elsewhere, does it feel like Mo Salah is levelling up his handsomeness? Good, it’s not just us. Oh, and we’re not going to argue with a Little Mix member about Alex Oxlade-Chamberlain’s credentials.

They’ve fallen from their perch, but there’s still plenty there. Alexandre Lacazette is in the Champions League for looks, while Hector Bellerin has done actual modelling.

It’s no Wenger era though, is it?

James Tomkins is a lowkey contender for most handsome Englishman (in the league, not just in general), while Wilf Zaha would be in the running for that tag if he hadn’t declared for Ivory Coast.

A lot of their players don’t seem to have faces, though. If Vicente Guaita or Martin Kelly walked past you in the street, you wouldn’t notice them.

We can’t risk Olivier Giroud leaving in January and ruining this, even if the return of handsome young man Tammy Abraham helps add depth.

Elsewhere, no one actually knows if Marcos Alonso is good-looking, because the hair distracts you. Ruben Loftus-Cheek, though? No debate there.

It’s weird how many of their squad are essentially overgrown children.

Sergio Aguero and Bernardo Silva make up for that, though, while it would be rude to leave Riyad Mahrez out of the top five.

Ending the year with a smile 💙

Trezeguet, Henri Lansbury and Jota? A fantastic midfield foundation. It always helps to focus on the core of the team, and Villa have nailed it.

The entire squad has flecks of handsomeness wherever you look – a solid effort from Nuno’s squad.

There’s also Erik Lamela, who is surely the prettiest player in the league if not the most handsome.

Oh, sorry, we got lost in Andre Gomes’ eyes. What were you saying?

Sometimes I see Andre Gomes and I just wonder how people can be so handsome pic.twitter.com/4tpMikjDZh