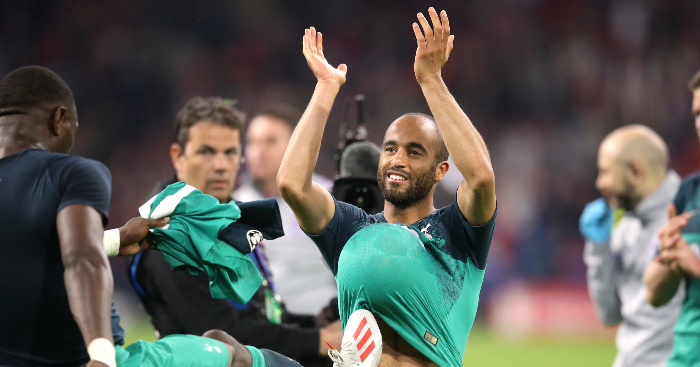 Lucas Moura joined an exclusive club of players last night as his brilliant hat-trick sent Ajax to their knees and Tottenham to the Champions League final.

In almost 30 years of the Champions League era, only five players have scored three goals in a semi-final, four of which have come in this decade.

We’ve taken a look at each of them, ranking them from worst to best. There are some special goals here.

Olic has described his performance against Lyon, scoring all three goals as Bayern Munich beat the 10-man French outfit 3-0, as the best match of his life.

Louis van Gaal’s men went on to lose the final to Jose Mourinho’s Inter back in 2010, but that semi will nevertheless live long in the memory.

At the time, the Croatian was only the second player to score a semi-final hat-trick in the Champions League era – and his first goal was the pick of the bunch.

An inspired 25-yard free-kick from the legendary Italian was followed by two unstoppable penalties as Juventus beat Monaco 4-1 in the first leg of the semi-final in 1998.

Zinedine Zidane wrapped things up with the fourth goal to make the second leg a formality.

Unsurprisingly, as well as having scored more goals as anyone in the history of the competition, Ronaldo also has the joint-most Champions League hat-tricks, along with – you guessed it – Lionel Messi.

It will have been a cruel sense of déjà vu for Atletico Madrid when the Portuguese forward scored three goals to help Juventus mount a second-leg remontada from two goals behind in the quarter-final of 2018-19.

Two years earlier, with a place in the final up for grabs, Ronaldo scored a semi-final hat-trick as Real Madrid beat their city rivals 3-0 in the first leg, the fourth consecutive year they’d knocked them out.

The hat-trick was a key moment in his transformation into a pure number nine. Absolutely lethal in the box.

Three goals down in the tie, it doesn’t get much better than a second leg, second-half hat-trick, with the decisive away goal in the final seconds of injury time.

There was a sense of destiny as Lucas broke onto a loose ball, lashing it home to send Spurs to their first ever Champions League final, but the best of his goals was his second as he took four perfect touches in the Ajax penalty to turn and get his shot away.

Relive it all in just 60 seconds… pic.twitter.com/X4yXgkpCmT

Back in 2013, Borussia Dortmund beat Jose Mourinho’s Real Madrid, a side that had won La Liga with a record 100 point tally the year before, by a score of 4-1, with Lewandowski scoring all four goals against a back four containing Pepe, Raphael Varane and Sergio Ramos.

Watch: Lucas cries after being shown winner with Brazilian commentary