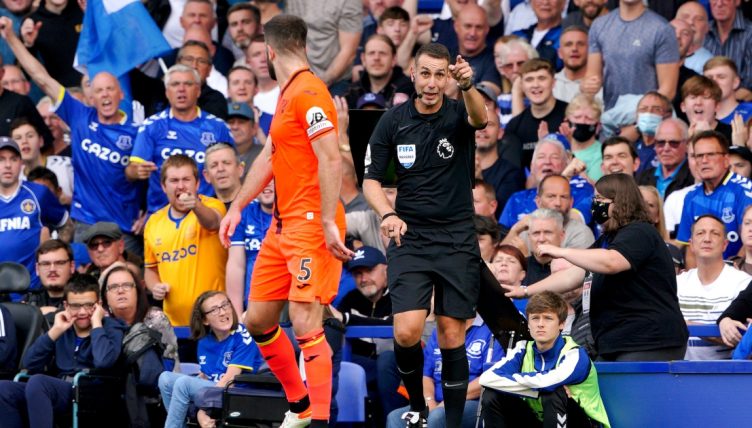 The 2021-22 season is the third campaign where we’ve had VAR in the Premier League – but it continues to divide opinion and cause controversy.

Note: we’ve only included figures that relate to overturned decisions only so do not include VAR referrals that have upheld the officials’ original decisions.

Harry Kane has endured a difficult start to 2021-22 and was relieved when his goal against Newcastle was awarded by VAR after it had originally been ruled out for offside.

Watford had goals against Norwich City and Everton initially disallowed for offside before VAR intervened and allowed both goals to stand.

The Hornets then had another offside call go in their favour when Bukayo Saka’s goal for Arsenal was disallowed following a VAR review.

During West Ham’s win over Newcastle, the offside flag was raised when Aaron Cresswell’s cross appeared to be turned into the goal by Jarrod Bowen. But the goal was allowed to stand after replays showed that Cresswell’s shot had gone all the way into the net untouched.

They were given a one-man advantage against Leicester City when replays showed Ayoze Perez stamping on Pablo Fornals’ ankle.

David Moyes’ side were awarded a late penalty against Manchester United, only for Mark Noble to come off the bench and see his effort saved by David de Gea.

Tomas Soucek thought he’d scored against Leeds but the goal was ruled out after VAR showed Michail Antonio had clattered Illan Meslier in the face with his arm in the build-up.

West Ham’s task against Aston Villa was made easier when Ezri Konsa’s yellow card was upgraded to red following a VAR review.

Christian Benteke thought he’d scored a late winner against Newcastle but his celebrations were short-lived as VAR disallowed the goal due to a foul against Marc Guehi.

Palace were incredibly relieved when Gabriel Jesus’ equaliser for Manchester City was disallowed due to a marginal offside call against Phil Foden.

During their 1-0 win over Wolves, VAR overturned the decision to disallow Wilfried Zaha’s goal and also cancelled a Wolves penalty.

The Reds were awarded a penalty against Chelsea after VAR spotted a handball on the line by Reece James, who was also sent off.

Liverpool’s historic 5-0 win over Manchester United was made even easier when Cristiano Ronaldo had a goal ruled out for offside and Paul Pogba’s yellow card was upgraded to red.

Sadio Mane scored one legitimate goal in their 2-2 draw with Brighton but also saw a goal ruled out for handball in the build-up.

Let’s start with the Reece James red card for handball on the goal-line.

For all the controversy this has caused, there’s no other decision than a penalty and a red card.

James clearly moves his hand into the path of the ball and prevents a goal. pic.twitter.com/nqsloj75ln

Aaron Ramsdale was originally penalised for bringing down Burnley’s Matej Vydra, but the penalty was cancelled after a VAR review.

The Gunners were then awarded a penalty against Aston Villa when VAR spotted a foul on Alexandre Lacazette by Matt Targett.

Bukayo Saka thought he’d opened the scoring against Watford, only to see the goal chalked off due to an offside call.

Brighton were able to complete a dramatic comeback against Liverpool after VAR kept the score at 0-2 by ruling out a Sadio Mane goal for handball.

They had a mixed experience with VAR against Newcastle as they were awarded a penalty but also saw Robert Sanchez sent off in injury-time.

The Chelsea players were furious when Liverpool were awarded a penalty and Reece James was shown a straight red card for handball at Anfield.

While Timo Werner had a goal disallowed against Southampton, VAR did later change James Ward-Prowse’s yellow card to a red card.

VAR awarded the Blues a penalty against Norwich and also ordered the spot-kick to be retaken after spotting an encroachment by Tim Krul.

But they’ve since seen goals against them from West Ham’s Tomas Soucek and Leicester City’s Ademola Lookman ruled out by VAR.

Villa had two penalty decisions go in their favour in the second game of the season as they were awarded a spot-kick while Newcastle had their penalty cancelled.

The first VAR decision that went against them in 2021-22 came when Matt Targett was adjudged to have fouled Arsenal’s Alexandre Lacazette inside the penalty area.

After a double VAR check, Kortney Hause escapes a red card but his defensive partner Ezri Konsa is sent off! 🟥

The Saints thought they had won another spot-kick against Manchester City, but the decision was overturned when VAR intervened and referee Jon Moss watched replays of the incident.

While VAR did disallow Timo Werner’s goal for Chelsea, it also upgraded James Ward-Prowse’s yellow card to a red in the same game.

Brentford’s first experience with VAR in the Premier League went against them as it overturned the original decision to flag Mohamed Salah’s goal for offside.

But they were grateful for VAR when Maxwel Cornet’s goal for Burnley was disallowed for offside in the build-up against Chris Wood.

Bryan Mbeumo had the ball in the back of the net against Norwich City only for VAR to rule it out for offside.

Rafa Benitez was grateful for VAR when Everton were awarded penalties against Leeds United and Norwich City in the opening weeks of the season.

But their celebrations after Yerry Mina’s late winner against Manchester United were short-lived as VAR disallowed the goal for offside.

Watford’s Josh King came back to haunt the Toffees with a hat-trick in October and his first goal was allowed to stand after an incorrect offside call.

They were helped out by the technology when Wolves’ Hwang Hee-Chan had a goal disallowed for offside, although Everton still went on to lose 2-1 at Molineux.

Everton were awarded a penalty against Tottenham, only for the referee to overturn the decision after consulting the pitch-side monitor. Mason Holgate was also sent off for a challenge on Pierre-Emile Hojbjerg in the 90th minute.

City have already seen Ferran Torres’ strike against Norwich City and Gabriel Jesus’ equaliser against Crystal Palace ruled out by VAR this season.

Kyle Walker was penalised for a foul on Southampton’s Adam Armstrong but VAR came to their rescue, cancelling the penalty and the red card.

I know Gabriel Jesus’ goal wast ruled offside, but the touch from Phil Foden and the vision to find Jesus. What a goal man, I’m not letting it go unnoticed. pic.twitter.com/sCaGnTllbK

VAR worked in Norwich’s favour in August, disallowing Ferran Torres’ goal for Manchester City and awarding them a penalty against Leicester.

But Ismaila Sarr’s second goal against the Canaries was allowed to stand after being initially ruled out for offside against Josh King.

VAR awarded Everton and Chelsea penalties against Norwich and also ordered Chelsea’s spot-kick to be retaken after noticing encroachment by Tim Krul.

Norwich finally got their first Premier League win of the season against Brentford after Bryan Mbeumo’s goal was disallowed for offside.

Leicester have had a difficult start to the season and it certainly hasn’t been helped by VAR.

Ayoze Perez was sent off against West Ham and the referee pointed to the penalty spot after watching a replay of Caglar Soyuncu’s foul on Norwich’s Pierre Lees-Melou.

The Foxes were relieved when Chris Wood’s late goal for Burnley was disallowed but Ademola Lookman later had a goal against Leeds chalked off by VAR.

Burnley benefitted from more VAR decisions than any other team in 2020-21 and that seemed to carry on into this season when Mohamed Salah’s goal for Liverpool was disallowed for offside.

But VAR has been a hindrance to Sean Dyche’s side in recent weeks and the initial decision to award them a penalty against Arsenal was overturned.

Chris Wood saw his late winner against Leicester ruled out for offside and Maxwel Cornet had a goal disallowed against Brentford due to Wood being in an offside position.

Ole Gunnar Solskjaer breathed a sigh of relief when Yerry Mina’s goal for Everton was disallowed for offside following a VAR check.

During their 5-0 defeat to Liverpool, VAR rubbed salt into United’s wounds by disallowing Cristiano Ronaldo’s goal and upgrading Paul Pogba’s yellow card to a red.

🗣️ "It wasn't a good tackle, quite rightly sent off."

Dermot Gallagher takes a look at Paul Pogba's red card for the studded challenge on Naby Keita in #MUFC's 5-0 defeat to #LFC 🟥 pic.twitter.com/WCNsSanq1U

After 11 Premier League games in 2021-22, Wolves are yet to have a VAR decision that has gone in their favour.

Hwang Hee-Chan’s goal against Everton was disallowed for offside, while Wilfried Zaha’s goal for Crystal Palace was allowed to stand after the linesman incorrectly gave offside.

Wolves thought they had a great chance to equalise against Palace but their penalty was cancelled as Joel Ward’s challenge on Rayan Ait-Nouri was outside the box.

West Ham’s Aaron Cresswell and Tottenham’s Harry Kane both saw their goals against Newcastle initially ruled out for offside before VAR intervened.

During their defeat to Aston Villa in August, they conceded a penalty and also had a spot-kick of their own cancelled by VAR.

They also conceded a late equaliser against Southampton after Jamaal Lascelles fouled Adam Armstrong in the penalty area.

But they were grateful for VAR when Christian Benteke’s late winner for Crystal Palace was disallowed for a foul on Ciaran Clark.

Newcastle conceded another penalty during their draw with Brighton but did later see Robert Sanchez sent off for his challenge on Callum Wilson.