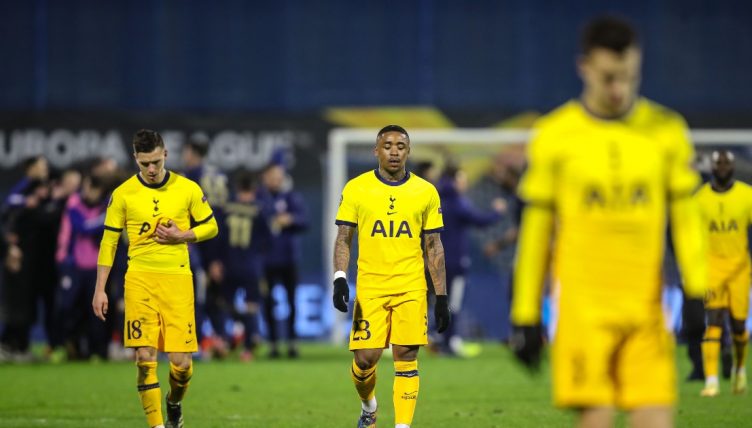 Tottenham’s involvement in this season’s Europa Conference League has been rudely cut short – but it’s arguably not even their most embarrassing exit from Europe over recent years.

Spurs have made being, well, ‘Spursy’ into an art form over recent decades and this unfortunate disposition has frequently reared its head in European competition.

Their improved Premier League form has earned them plenty of excursions to the continent but a repeat of their 2019 Champions League final appearance appears unlikely.

And they’re out of Europe before Christmas this year, having been made to forfeit their final group game against Rennes 3-0 by UEFA, owing to a COVID outbreak that prevented the tie from being played on its original date.

Here, we’ve ranked all of Tottenham’s European exits since the start of the 2000-01 season from the least to the most embarrassing.

Tottenham’s first campaign in Europe since 1999-2000 was the opposite of embarrassment.

Some scalps were taken (Beskitas, Bayer Leverkusen, Braga), White Hart Lane was buzzing with the novelty of it all and Spurs were eliminated in the quarter-finals by eventual winners Sevilla before their limitations could be seriously exposed.

All in all, an ideal stepping stone for greater things to come.

Reaching the Champions League final, creating some unforgettable memories for long-suffering Spurs fans in Manchester and Amsterdam, can never be classed as an embarrassment.

But the match with Liverpool was effectively decided by the time Sadio Mane chipped the ball onto Moussa Sissoko’s arm in the second minute in Madrid.

As Spurs slip further away from Champions League glory, the 2-0 defeat has become tinged with increasing levels of regret.

Spurs’ first Champions League campaign was a return to those glorious European nights at the Lane not seen since the era of Jimmy Greaves.

Inter Milan were smashed. Waves of Milan attacks were stopped by Joe Jordan’s forehead alone. And an exit to Real Madrid in the quarter-finals was the definition of respectable.

Yes, some unfortunate goalkeeping errors were involved, but Spurs fans would have felt pride at their team’s exploits.

The defeat against Getafe was their only reverse in the group stages and Spurs were eventually eliminated on penalties by PSV Eindhoven in the last 16.

No one was that bothered – Spurs had won the League Cup just two weeks before. It wouldn’t be too long before more silverware arrived, right?

During Spurs' match against Getafe in 2007, the crowd got word that Jol would be sacked after the game so responded in chorus by chanting his name. pic.twitter.com/MmLlKRfZVK

An error-strewn 2-0 defeat against Fiorentina ended Spurs’ European adventure in 2015, with Mohamed Salah capitalising on Jan Vertonghen’s blunder to send Pochettino’s side out of the Europa League last 32.

This one feels pretty forgettable set against some other Tottenham disasters, so places low enough here.

It was always hard to imagine ‘Tactics’ Tim Sherwood leading Spurs to glory in Europe on his strong gilet-game alone.

And so it proved. Dnipro Dnipropetrovsk were just about seen off but Benfica strolled into north London and dismantled Tottenham by three goals to one in the last 16.

It was a long way from duelling with Milan and Real Madrid but Spurs appointed Mauricio Pochettino in the summer of 2014 – it truly was the darkness before the dawn.

PAOK, Rubin Kazan and Shamrock Rovers. Arguably the least intimidating group since S Club 7 – but one Spurs failed to negotiate in 2011.

Defeats in Russia and at home to PAOK did the damage but you felt Harry Redknapp wasn’t too bothered about leaving Europe, which negated any strong feelings of embarrassment.

Tottenham were starting to become a force under Pochettino, finishing 3rd in the Premier League and colonising the England team at Euro 2016.

But that didn’t help them much against Borussia Dortmund. Spurs had battled through to the last 16 of the Europa League before being outclassed by Thomas Tuchel’s side.

Pierre-Emerick Auabmeyang and Marco Reus did the damage and the gap between Spurs and Europe’s elite was highlighted once again.

As Redknapp never tires of saying, Spurs were a mess when he took over in October 2008.

Stranded at the bottom of the Premier League table, with fewer points than a samosa, meaning that securing Premier League survival was the immediate priority.

This meant the last-32 tie away at Shakhtar Donetsk was treated with little importance. A much-changed Tottenham side lost 2-0 and got about the serious business of finishing 8th in the league.

It wasn’t the end of the world, but sometimes not caring about something is more embarrassing than making the effort.

A heat-seeking missile that’s still rising towards the sun…

Hopes were high as Spurs qualified for their first Champions League campaign in six seasons. They shouldn’t have been.

An underrated Monaco beat Pochettino’s side twice. Spurs couldn’t score against Bayer Leverkusen. Group stage elimination was confirmed, only for Spurs to fall at the first hurdle in the Europa League after Christmas.

Maybe it’s best to move on…

“It’s the history of Tottenham,” said Giorgio Chiellini after Juventus had knocked Spurs out of the Champions League last 16 in 2018.

“They always create many chances and score so much but, in the end, they miss always something to arrive at the end. We believe in history.”

Exhibit A of how to skewer an entire club in one interview. Red faces all around.

As if letting in 7 (SEVEN) against Bayern Munich in their spanking new stadium wasn’t enough, Spurs staggered into the last 16 where a young, hungry Leipzig side lay in wait.

With the global pandemic meaning the Champions League resorted to a one-legged competition from the quarters onwards, Jose Mourinho’s side didn’t even make it that far.

A Timo Werner penalty was enough to beat Spurs in the first leg and Tottenham were euthanised out of the competition after a three-goal loss in Germany in the return.

It was less than a year after reaching the final. Spurs didn’t just embrace decline, they jumped into a clown car and raced down the nearest steep hill.

Nobody wanted to play in the inaugural Conference League but Spurs’ participation in the new tournament was nothing short of disastrous.

They were mocked and trolled by Pacos de Ferreira before and after the 1-0 defeat in their play-off leg and things didn’t get much better in the group stages.

After losing at Vitesse, making 11 changes for a league match at West Ham they’d lose anyway, a 2-1 defeat at Slovenian side Mura was one of the most embarrassing in the club’s history.

The forfeit against Rennes provided a downbeat signoff to a very ‘Spursy’ episode.

As Dinamo Zagreb’s manager sat in prison, his Tottenham counterpart was exposed as a massive fraud as Spurs threw away a two-goal lead to exit the Europa League in Croatia.

The ultimate ‘Lads…’ moment. No further, Your Honour.

His first of three goals against Tottenham 👏

A tribute to ‘Sir’ Ledley King, the most cultured defender of his era