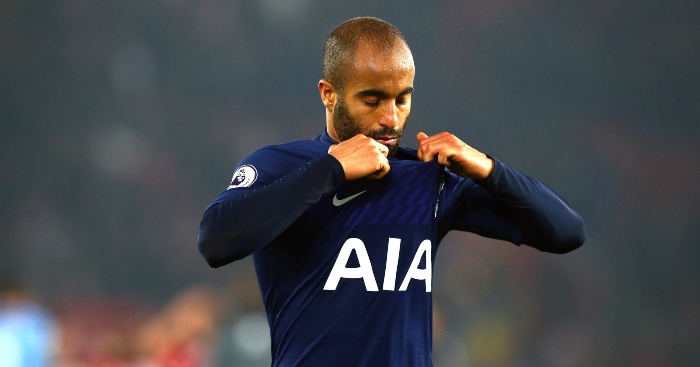 Tottenham went more than a year without signing anyone for a fee, and when you look at their recent record in the mid-season market you can understand their restraint.

Since the transfer window system came into force in 2002-03, Spurs’ January signings have included the likes of Gilberto, Chris Gunter and Michael Brown, none of whom exactly set the world alight.

But what of the more recent purchases? Surely the streamlining process of the 2010s led to a better end result. Not quite. Here they are, ranked from worst to best.

In more than four years as a Spurs player, Khumalo played a grand total of 0 competitive minutes. We get the sense that’s not great.

Impressed that Bongani Khumalo will leave Spurs having not lost a first team game since joining back in 2011. #CultHero

Remember when Spurs pulled the ol’ switcheroo to avoid paying Manchester United for young English defender Fryers. Well, we hope those six months he spent in Belgium were worth it for those seven league games.

After a spell at Crystal Palace which didn’t exactly bear fruit, he’s now playing his football down in League Two. The best thing you can say about the whole affair is at least Spurs were vindicated for not paying over the odds at tribunal.

Remember when Spurs were in a title race in January 2012 and signed three players who made a combined 25 appearances in their entire Tottenham career? Well, Nelsen accounted for eight of those 25.

If his 109 league minutes showed anything, it’s that maybe signing a 34-year-old who was too broken to even play semi-regularly for a terrible Blackburn side wasn’t the answer.

Falque contributed five of the aforementioned 25 appearances, just one in the league, but at least he had some theoretical resale value.

The Spaniard had already been at White Hart Lane on loan, albeit without playing, when Harry Redknapp made the move permanent in January.

He has carved out a decent career for himself, so much so that his time in England will now barely register on his CV.

Not only did Gudjohnsen hit double figures for league games in a Spurs shirt, but he even scored a real-life goal.

The Icelander netted against Stoke in the league and Fulham in the cup, during a stint on loan from Monaco in 2010 which epitomised his bizarre post-Barcelona career.

If you remember watching him for Spurs, there’s a good chance your mind is playing tricks on you, such was the underwhelming nature of that spell.

Pienaar being bang in the middle of this list tells you more about the list than it does about him.

A mainstay of Everton’s midfield under David Moyes, the South African lasted a solid 18 months at Spurs, bringing 18 games and a loan spell back at Goodison Park during which he scored a memorable equaliser in the 4-4 draw with Manchester United.

He returned to Everton permanently at the end of that season, earning Spurs a profit despite not really ever being around.

When Holtby joined from Schalke on a cut-price deal, he felt like a great addition to Andre Villas-Boas’ squad, and some impressive early games strengthened that argument. However, instead of kicking on, it quickly became apparent that he’d hit his ceiling.

No, you didn’t hallucinate the German joining Blackburn in September 2019.

The third member of the January 2012 trio along with Falque and Nelsen, Saha did about as well as could have been expected of him.

The highlight of the Frenchman’s tenure came with two goals in a 5-0 win over Newcastle, and he finished with four goals in 12 league and cup games.

Still not stunning, but then again there’s rarely value in the January market.

Finally, a solid piece of January business. Kaboul didn’t stick around very long in his first Tottenham spell, but he returned from Portsmouth in 2010 and did a great deal better.

His arrival helped Spurs lock down a top-four spot, while the Frenchman was pivotal in helping Spurs develop into a serious top-four contender, even if there were some low points along the way.

They said goodbye at the right time, too, with Kaboul’s spells at Sunderland and Watford demonstrating how his best years were behind him.

Spurs’ only January 2018 signing, the ex-PSG man wrote his name into Tottenham folklore with his Champions League semi-final hat-trick against Ajax.

While the Brazilian hasn’t been an automatic pick during his time in north London, he’s put up reasonable goalscoring numbers for a winger who’s often thrown on from the bench.

And even if he hadn’t, that performance in Amsterdam counts for a lot.

Dele doesn’t feel like a mid-season signing, having gone straight back on loan to MK Dons for the remainder of the 2014-15 campaign, but Spurs soon saw the benefit.

The England midfielder was one of Tottenham’s most important players of the Pochettino era, with the 22 goals he scored in the 2016-17 season a clear standout as Spurs reached a club record points tally of 86.

The best part? At 23, he’s still got plenty of good years ahead of him.