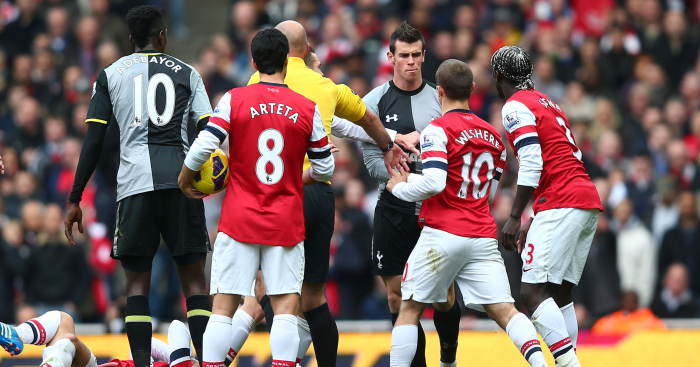 Arsenal and Tottenham have a famously heated rivalry – and sometimes that boils over on the pitch.

The north London derby has taken on an increased importance in recent years as Tottenham have emerged as one of the leading sides in the Premier League, and the tension clearly gets to the players at times.

We’ve looked back at six scuffles from derby clashes in the Premier League. They really were better back in the day.

Fittingly, this is started by a shithouse challenge by Emmanuel Adebayor – who else? – on Santi Cazorla.

Wilshere, doing his usual Scrappy Do impression, is first on the scene, with Bale taking objection to his presence.

Theo Walcott and Aaron Lennon enter the fray for good measure, but this sadly fails to ignite. It’s probably for the best, as that would be the worst ‘brawl’ in the history of the universe.

We actually think Lamela might be quite hard in that unassuming Argentine b*stard kind of way.

But then this suggests otherwise.

We never realised Ghaly did this much in a Tottenham shirt.

The midfielder beats two defenders before having a little tussle with Armand Traore. Something has clearly p*ssed off Ghaly, who immediately follows that up by clattering Philippe Senderos and having a butting match with Diaby.

We’re not quite sure why he’s picked on three of the most inoffensive players to ever appear for Arsenal, but it’s still decent.

A real classic, all starting with a goalmouth scramble in which Sheringham sees the perfect opportunity to stick one on Keown.

Armstrong and Vieira become embroiled in a tangle as a result, and the striker later goes in two-footed on the Frenchman, somehow avoiding a red card.

Ian Wright, a man who knows a thing or two about fighting, is the next person to get involved.

Spare a thought for John Lukic, who looks thoroughly tired of all this sh*t.

Ljungberg actually seems hard done by here as he takes exception to a strong tackle from Edinburgh by giving the defender a little shove.

A melee ensues, but Ljungberg is the only player punished, seeing red for his efforts before flicking the Vs on his way off the pitch.

Keown later compounds the Gunners’ misery with a needless tackle on Jose Dominguez to collect a second yellow card.

Eric Dier vs everybody

Fair play, Eric. It must be incredibly tempting to celebrate in front of your rival fans. Telling Aaron Ramsey to sit back down is excellent too.

Just make sure you don’t lose the game next time.

He then came on and showed Dier who is boss!!!RT @ODDSbible: Eric Dier tells Aaron Ramsey to go sit back down on the bench 😂😂