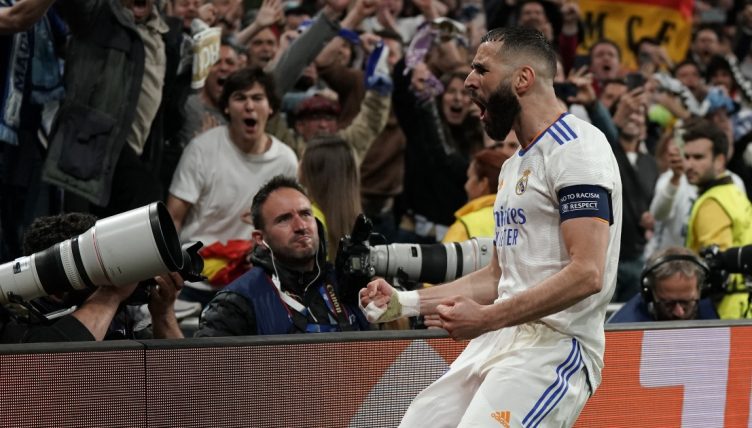 Real Madrid have booked their place in the Champions League final after coming from behind in the most incredible style to beat Manchester City 3-1 at the Bernabeu.

Pep Guardiola’s side looked to have secured a spot in consecutive European Cup finals when Riyad Mahrez made it 5-3 on aggregate in the 73rd minute, but Madrid struck back in remarkable fashion.

A Rodrygo brace from the bench in the dying embers sent the semi-final clash to extra-time with the scores level on aggregate. Karim Benzema’s penalty in the first half of the additional period completed the comeback.

Carlo Ancelotti’s men will now face Jurgen Klopp’s Liverpool in the showpiece final in Paris at the end of May. Los Blancos will hope they can repeat their result from 2018 when they defeated the Reds to win the coveted trophy in Kiev.

Here are 15 stats from what was one of the greatest turnarounds we’ve ever seen in Europe’s elite competition.

– Rodrygo is the first player to score twice in the 90th minute of a Champions League knockout match.

– Benzema has scored 10 goals in the Champions League knockout stages this season, the joint-most by a player in a single campaign along with Cristiano Ronaldo in 2016-17, who also achieved this tally for Madrid.

– The 34-year-old French striker has become only the fourth player to have scored in both legs of the quarter-final and semi-final in a single Champions League campaign after Fernando Morientes, Neymar and Edin Dzeko.

– Benzema has scored seven Champions League goals against English teams this season, the most by a player in a single campaign in the competition’s history.

REAL MADRID HAVE GONE AHEAD! 😮

And of course, Karim Benzema had to get in on the goals! 🎯

– Real Madrid have knocked out an English side from the Champions League semi-finals for the first time since 2016. That victory also came against City.

– Despite being behind for 178 minutes of the Champions League semi-final against City, Madrid made still it through to the final.

– Rodrygo has scored just six goals in 70 La Liga appearances but has 10 goals in 26 Champions League games for Madrid.

– During the second leg against City, Ancelotti’s side didn’t have a shot on target in the first 89 minutes. They then scored three out of their five shots on target.

–  Madrid have advanced to the final for the first time in their history after losing the first leg of a European Cup/Champions League semi-final.

– Being played for the third time, Liverpool versus Real Madrid becomes the most played Champions League final ever (they currently have one victory each).