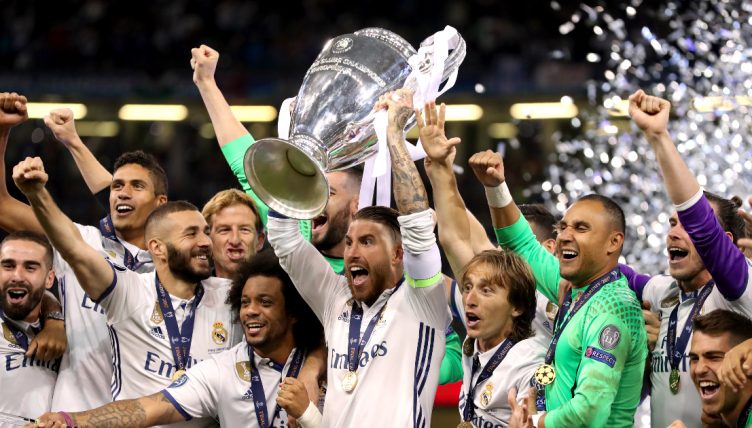 Real Madrid are the most successful club in the history of European football, with 13 Champions League titles to their name. But it’s not all been plain sailing, and their latest comeback win over PSG was another example of them flying close to the sun.

Knockout competitions are exciting because even the best, most consistent team can find themselves in trouble through one moment of bad luck, and Real Madrid have had plenty of scares over the years.

However, it takes a lot of bottle to play for a club with the prestige of Real Madrid, and their superstar players have the experience and nous to navigate Los Blancos out of the most sticky situations.

Some of their knockout ties over the years have seen them come from behind to win from nothing, or hold on to narrowly avoid collapse, and somehow progress to the next round against all the odds.

We’ve picked out seven of the best ones…

The 2002 quarter-finals saw a heavyweight clash between Real and Bayern Munich, and Real’s hopes looked doubtful after falling to a 2-1 defeat at the Olympiastadion in Munich.

Two late goals from the hosts cancelled out Geremi’s early opener, but Real turned it around in Madrid.

They left it until the 69th minute to take the lead at the Santiago Bernabeu, but the nerves in the stadium were calmed as goals from Ivan Helguera and Guti saw Real Madrid progress to the semi-finals. They would go on to eventually win the trophy, a third triumph in six years.

The previous season had seen Real Madrid get shockingly knocked out by Jurgen Klopp’s Borussia Dortmund in the semi-finals, and they were wary of their opponents as they faced each other again in the 2014 quarter-finals.

A 3-0 home victory in the first leg meant Real thought they could relax a bit in Germany. They were wrong.

Angel Di Maria had the chance to grab a crucial away goal, but missed an early penalty, and things went from bad to worse as Dortmund then took a 2-0 lead before half time.

Klopp’s side were all over Madrid, and it seemed inevitable that more goals would follow.

However, Sergio Ramos and Pepe commanded the backline well, seeing out the second half without conceding a goal that would have sent the tie to extra time, and they breathed a massive sigh of relief at full-time.

It was a monumental result, which significantly changed football for the next few years considering what happened next.

Real Madrid’s long wait for a final to try and win ‘La Decima,’ their tenth European Cup, came against their city rivals Atletico Madrid in 2014.

The two Madrid clubs headed to Lisbon, and after Diego Godin gave Atletico the lead, it looked pretty bleak for Real.

That was until their legendary captain turned up.

Sergio Ramos, one of the most inevitable players in football, popped up with a header in the 93rd minute to equalise from a Luka Modric corner, taking the game to extra time.

Better late than never, and the late equaliser gave Real the boost they needed, firing in three goals in extra time to secure the trophy.

A sore one for Atletico, but one of the biggest moments in Real Madrid’s history.

Real vs Atletico will always send bring to mind this absolute heartbreaker from Sergio Ramos.

What's the biggest goal that's been scored in your club's derby?pic.twitter.com/0dmu7GPPIu

The reigning Champions were gunning for a second consecutive title when they came up against Schalke in the last-16.

A 2-0 away win in the first leg set up what should have been a comfortable victory in the Santiago Bernabeu.

It was anything but.

Schalke took the lead twice in the first half through Christian Fuchs and Klaas Jan-Huntelaar, but Cristiano Ronaldo equalised both times before Karim Benzema gave the hosts a 3-2 lead.

The Bundesliga club then brought on youngster Leroy Sane, who scored a screamer for his first senior goal before Huntelaar grabbed his second to put the visitors ahead, and the away goal rule meant that one more Schalke goal would have sent the Germans through.

Real Madrid were in panic mode and the visitors were extraordinary, but it wasn’t to be. Real held on by the skin of their teeth, while Sane’s incredible performance earned him a move to Manchester City.

Are Real Madrid ready for another Leroy Sane masterclass?

After seeing Barcelona take their European crown in the previous season, Real wanted nothing more than to add to their previous 10 trophies, but yet again had troublesome opposition from the Bundesliga.

A shock 2-0 away defeat in the first leg meant Real Madrid had a difficult task at the Bernabeau, to overturn the deficit whilst the threat of an away goal for Wolfsburg loomed.

Two quickfire goals in the first half saw Ronaldo level the tie up, but there was plenty more to be done, and the stress levels in the stadium could be felt miles away.

With less than 15 minutes remaining, Ronaldo completed his hat-trick, causing a minor earthquake in Madrid and breaking Wolfsburg hearts.

Real Madrid had gotten away with it, and went on to win the trophy again, but look back on this as one of their closest shaves yet.

One of the most controversial games in Champions League history took place in the second leg of the 2018 quarter-finals, as Juventus travelled to Real Madrid.

Real’s 3-0 away victory in the first leg put them in the driving seat, but this was blown out of the water as Mario Mandzukic and Blaise Matuidi had levelled the tie-up after the hour mark.

With Juventus playing at the Bernabeu, one more goal would have put them beyond the point of no return, but extra time was looming nevertheless.

That was until a remarkable set of events in injury time. Real Madrid won a penalty in the dying embers of the game as Mehdi Benatia fouled Lucas Vazquez, and Gianluigi Buffon went beserk.

The legendary keeper confronted referee Michael Oliver so angrily that Oliver brandished a straight red card at him, and this did nothing to calm him down.

Wojciech Szczesny came on cold to face a penalty from Cristiano Ronaldo, but had no answer to stop him, and Real Madrid had secured a way through when everything was pointing in the direction of a collapse.

Buffon still hadn’t calmed down after the final whistle, calling out Oliver for what he felt was an incorrect penalty call.

“The team gave it’s all, but a human being cannot destroy dreams like that at the end of an extraordinary comeback on a dubious situation,” Buffon remarkably stated.

“Clearly you cannot have a heart in your chest, but a bag of rubbish. On top of that, if you don’t have the character to walk on a pitch like this in a stadium like this, you can sit in the stands with your wife, your kids, having your drink and eating crisps.”

Not bitter at all…

📅 OTD in 2018, we witnessed an absolutely crazy ending to Real Madrid 🆚 Juventus…

The drama of the Champions League! 🍿pic.twitter.com/4E7dKsupMs

For once, Real Madrid weren’t favourites heading into a knockout tie, as Paris Saint-Germain rocked up to the tie with Kylian Mbappe, Neymar and Lionel Messi in their team.

PSG dominated the first leg, and secured a 1-0 win courtesy of Kylian Mbappe’s late, late goal, and continued this domination for most of the second leg at the Bernabeu.

However, for all of PSG’s talent, they simply did not possess the same cojones Real Madrid had, and Karim Benzema scored a fantastic second half hattrick to completely turn the tie on its head when it seemed impossible.

The old Barcelona boys Neymar and Messi were out, making it an even sweeter ‘remontada,’ and this was one of Madrid’s greatest adventures yet, as veterans Benzema and Luka Modric set Madrid alight with their performances.

Turns out experience is valuable. 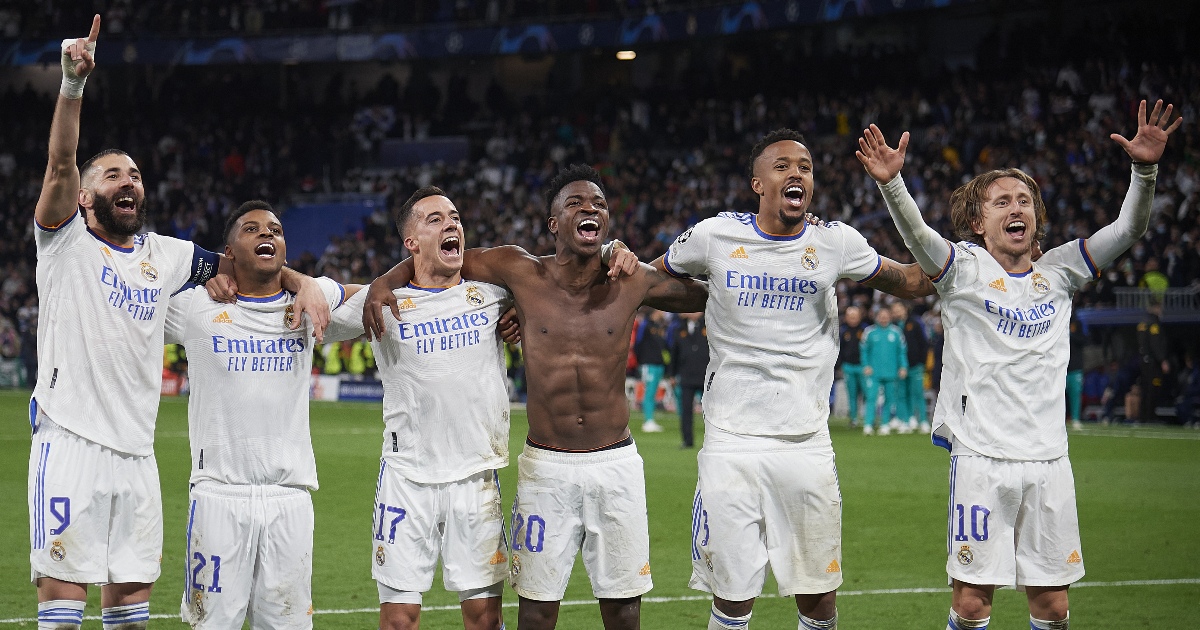