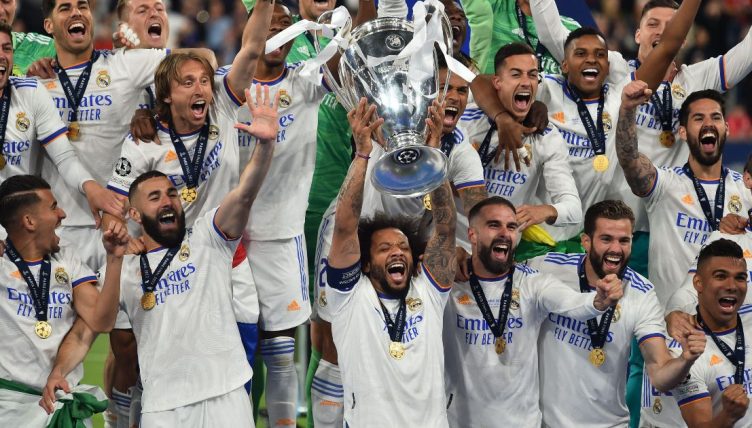 Real Madrid made more history and broke new records by beating Liverpool 1-0 in the Champions League final at the Stade de France.

Madrid, who beat Liverpool in the 2018 final, had already knocked out PSG, Chelsea and Manchester City but went into the final as underdogs.

Karim Benzema had a goal disallowed at the end of the first half before Vinicius Junior broke the deadlock in the 59th minute.

Despite Liverpool having nine shots on target, Madrid managed to hold on for the win and they are European champions once again.

“I can’t believe it,” Carlo Ancelotti said after the game. “We had a fantastic season. We did really well. It was a difficult game and we suffered a lot, more so in the first half. In the end I think we deserved to win this competition.

“We’re really happy. What can I say? I can’t say more. I am a record man. I had luck to come here last year and have a fantastic season. A fantastic club, a really good squad with a lot of quality and mental character.

“The season was top. I think we passed through really difficult games. The supporters helped us a lot in the last game. They helped us tonight. We’re happy and they’re happy.”

Here are 14 incredible stats that show just how special the achievement is.

– Madrid have won the European Cup/Champions League on 14 occasions. That’s twice as many times as any other side in the history of the competition.

– During the Champions League era, Madrid have reached the final eight times and they have always been on the winning side.

– Having previously won the competition in 2003, 2007 and 2013, Ancelotti has now become the first manager to win four Champions League titles.

– Thibaut Courtois’ nine saves against Liverpool is the most on record (since Opta began recording data in 2003-04) of any goalkeeper in a single Champions League final.

– Courtois is just the third goalkeeper to be named Man of the Match in a Champions League final after Oliver Kahn in 2001 and Edwin van der Sar in 2008.

– Vinicius Junior scored or assisted against every team Madrid faced in the Champions League knockout stage in the 2021-22 season.

– The Brazil international is the fifth-youngest player to score in a Champions League final after Patrick Kluivert, Carlos Alberto, Lars Ricken and Marco Asensio.

Vinícius Júnior steals in at the back post to tap home from close range ⚽️#UCLfinal pic.twitter.com/owgAzrA75V

– Karim Benzema scored 10 goals in the Champions League knockout stages in 2021-22, the joint-most by a player in a single campaign along with Cristiano Ronaldo in 2016-17.

– He’s the third Frenchmen to start a European Cup/Champions League final as captain for a non-French side. But he’s the first to end up on the winning side after Thierry Henry and Hugo Lloris both lost.

– Kroos has spent eight years at Madrid and has won the Champions League in 50% of those seasons.

– During the Champions League knockout stages in 2021-22, Madrid had 63 fewer shots than their opponents but still won the competition. In the final, they had just four shots to Liverpool’s 24 and won 1-0.

– Since the start of 2001-02, La Liga teams have played 17 Champions League and Europa League finals against non-Spanish sides. They’ve won all 17.