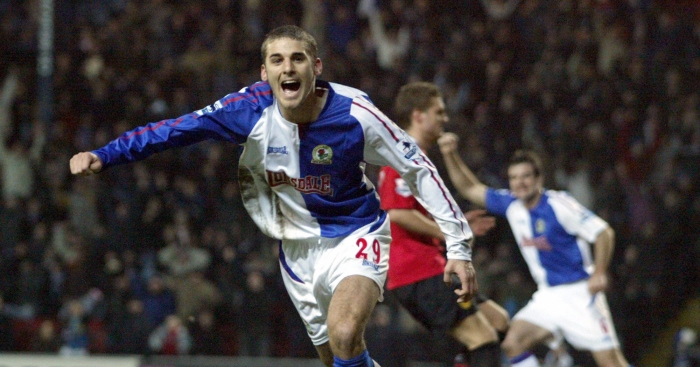 Blackburn Rovers and Manchester United have a tendency to play out underrated and exciting games.

The teams were involved in a number of thrilling games while both chasing titles during the 1990s, while United’s 5-3 victory in the 2008 League Cup quarter-finals is a forgotten classic.

And on February 1, 2006, Blackburn completed their first league double over United since before the Second World War with a brilliant 4-3 win at Ewood Park.

Morten Gamst Pedersen is lining up a free-kick from 35 yards and it’s surely too far out for him to…f*cking hell, he’s hit the bar.

Edwin van der Sar, moments after somehow pulling off an incredible save to tip Pedersen’s effort onto the woodwork, allows David Bentley’s scruffy rebound to squirm underneath his body and over the line.

The goalkeeper really should have done us all a favour and let the free-kick in.

Continuing the theme from the opening goal, Wayne Rooney drops deep to force a brilliant save out of Brad Friedel, only for the shot to be parried out to Louis Saha, handed a rare start ahead of Ruud van Nistelrooy.

To be fair to the striker, he still had a lot of work to do, but we can’t decide whether this is a clever finish or a complete fluke.

This is our favourite goal ever now.

Rio Ferdinand, one of the classiest operators in English football, has been moved up to central midfield with Roy Keane having departed earlier in the season – off the back of criticising Ferdinand in an infamous MUTV interview – and United suffering from injuries.

After a free-kick is launched into the visitors’ box, however, Ferdinand finds himself back in his natural centre-half position and couldn’t appear calmer as he heads the ball backwards to Van der Sar.

Except Van der Sar isn’t there. He’s right behind Ferdinand. And now the ball is behind the goalkeeper. And now Bentley has made it 2-1.

You know how sometimes defenders can get away with the ball hitting their hand if their arm is in a ‘natural position’?

Someone needs to tell Wes Brom how to act natural. Not that Lucas Neill’s bothered, and he at least gets to send Van der Sar diving in the wrong direction with an impressive two-step penalty.

This was Bentley’s first Rovers appearance since making his loan move from Arsenal permanent, and he marked the occasion by becoming the first player to score a hat-trick against Manchester United in the Premier League.

“David Bentley should possibly have done that a week before negotiating his permanent move from Arsenal, though; he might have got himself a bit more money.”

Minutes before Bentley’s third, Fergie replaced Kieran Richardson with Van Nistelrooy, and the striker quickly makes an impact with a typically predatory goal.

Van Nistelrooy used to shout in training: “I can’t play with this guy. He doesn’t even cross the ball,” according to Guillem Balague’s biography of Ronaldo. “I can’t make my runs because he’s not going to cross the ball.”

Oh, FFS. They’re not going to, are they?

Ferdinand, having been involved in a bust-up with Robbie Savage just a week earlier in a League Cup clash, goes flying in on the midfielder only a minute after being booked and walks off the pitch before Phil Dowd has the chance to brandish a red card.

It’s a silly thing to do, although Fergie wasn’t too happy with the referee.

“I have to say Rio committed two fouls in a minute, but their centre-back Andy Todd committed about 10, including a terrible foul on Kieran Richardson which he wasn’t even booked for. It was foul after foul from them.”