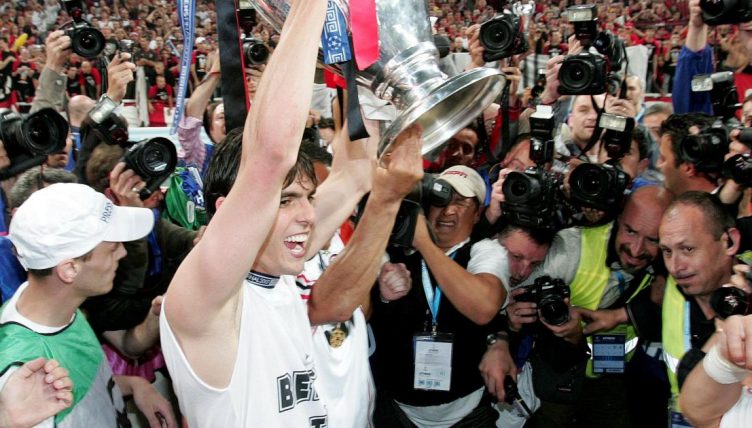 Kaka perhaps lacked the longevity to go down as one of the greatest players of all time – but for a while he was undoubtedly one of the world’s best.

Cristiano Ronaldo and Lionel Messi have maintained their incredible standards for so long that it’s rare for any other player to even enter the debate around the greatest player of the modern era, but as the last player to win the Ballon d’Or before the pair’s duopoly of the award began, Kaka certainly deserves a mention.

The Brazilian was as captivating as any player to take to the field at his best, and we’ve looked back at seven of his best moments to remind ourselves of just how good he was.

Taking Serie A by storm

Many South American players moving to Europe need time to settle and adjust. Not Kaka.

After signing for AC Milan from Sao Paulo in 2003 for €8.5million – a fee Silvio Berlusconi later described as ‘peanuts’ – the attacking midfielder quickly dislodged Portugal legend Rui Costa in the Rossoneri team.

The 21-year-old scored 10 goals in 30 Serie A appearances, playing no small part in helping AC Milan to win their only scudetto of the decade.

Roma scored more and conceded fewer goals than Milan, but Carlo Ancelotti’s men still won the title by 11 points. Their collapse from 4-1 up against Deportivo La Coruna was the only stain on Milan’s season.

Kaka exceeded expectations so quickly that he was named Serie A Player of the Season.

Technically, he was a magician, with vision only bettered by his touch. Physically, he was a specimen too. Standing at 6ft1in, he was almost impossible to knock off the ball. That’s if you could catch him… his rapier-like speed is often forgotten.

All those attributes were evident in what many believe to be Kaka’s greatest of 104 AC Milan goals: his second and the match winner in a 3-1 home win over Fenerbahce in the Champions League in 2005.

The man himself describes it: “The game was poised at 1-1 and there were only four minutes remaining of the match.

“I received the ball from Massimo Ambrosini 10 yards inside their half on the left as we broke from our own penalty area.

“I just kept running with the ball past one player, then another, then one more on the edge of the Fenerbahce box before finishing low under Volkan Demirel.”

When he left Messi for dead

If you need further proof of how rapid Kaka was, here he is, leaving Lionel Messi – Lionel f***ing Messi – choking on his dust at the Emirates in an international friendly in 2006…

Best in the world

Speaking of Messi, not many players have been viewed as superior to both he and Cristiano Ronaldo. But both were cast in Kaka’s shadow when the Ballon d’Or was decided in 2007.

“They win it every year now, but I could beat them back then,” he said later. “For me that’s important because I had the best opponents. I’m proud when I see that.”

The Ballon d’Or came on the back of Kaka’s only Champions League winner’s medal in 2007, a period which the Brazilian describes as “my prime”.

Lifting the European Cup in Athens came after Milan spectacularly blew it in Istanbul two years previously against Liverpool.

Kaka rates the 2005 capitulation as one of his most important lessons in football and when the rematch came in 2007, he was determined to prove it was a lesson learned.

Given he was part of the oldest average team ever selected for a final, there was no way Milan were going to let history repeat itself. Kaka was relatively subdued during the match, but he still played a leading role in the two key moments.

The first came when he won a free-kick from Xabi Alonso, which resulted in the opening goal, when Andrea Pirlo’s free-kick deflected in off Filippo Inzaghi; the second being his perfectly-weighted split pass to tempt Pepe Reina from his line, allowing Inzaghi to skip round the Liverpool keeper before rolling the ball into the empty net. 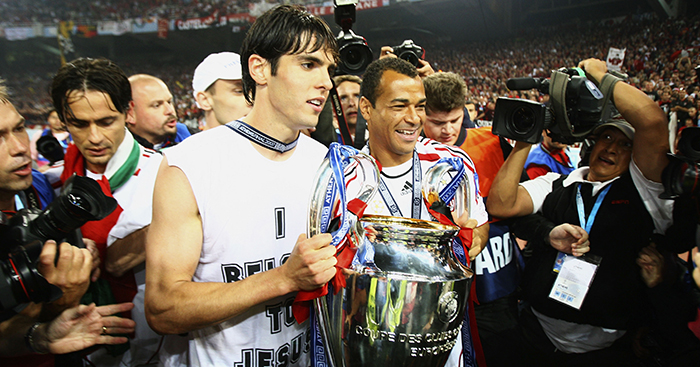 Milan had denied us of a tasty all-English final by dumping out Manchester United in the semi-finals.

Even though United triumphed 3-2 in a thriller in the first leg, it is that game in which he bamboozled Gabriel Heinze and Patrice Evra which Kaka remembers most fondly, as he told the Daily Mail.

“My second goal in the Champions League semi-final first leg against Manchester United was a highlight of my career.

“When the ball dropped from Dida’s long pass all I was thinking about was trying to do something special. To do it at Old Trafford, with all the history of the stadium, was amazing.”

That victory prompted Sir Alex Ferguson to describe Kaka as “one of the two best players in the world”.

Two years later, Kaka would be playing alongside the other player Ferguson was referring to.

Kaka joined Real Madrid for £56million in 2009, just two days before the second-most expensive deal ever was overshadowed by a new world record transfer. That probably suited the personalities and egos of both Kaka and Ronaldo.

Despite injuries hampering Kaka’s time at the Bernabeu, it should not be forgotten that the Brazilian was part of Jose Mourinho’s Primera Division title-winning team of 2011-12, when they broke the 100-point barrier.

Kaka finished that season – his third in Madrid – with eight goals and 14 assists.

16 of the best quotes on Kaka: ‘Every time the match is important he is there’