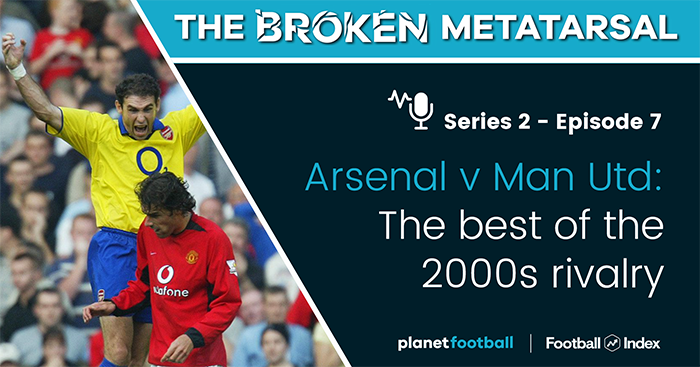 Arsenal v Manchester United was the game to watch in the first half of the 2000s – and we remember the best moments of that wonderful rivalry in the latest episode of The Broken Metatarsal.

Already rivals, the tension really started to step up once Arsene Wenger took over at Arsenal in 1996 as the two teams went head to head for the best part of the decade in a two-horse race to be Premier League champions.

As a 2000s podcast, we’re obliged to focus on the best moments of the new millennium, starting with the Arsenal Double-winning side of 2001 and ending with that famous Roy Keane and Patrick Vieira argument in the tunnel.

And in an attempt to spice things up and renew some old battles, we invited back Arsenal fan Alex Brooker and Manchester United fan Danny McLoughlin to join Rich Williams and Mark Holmes to give the views from both sides of the fence on the Battle of Old Trafford, pizzagate and plenty more.

There’s no interview this week as we continue to record from home, but we are back with another episode of Fact or Fiction in which Rich tries to work out which of the unlikely stories about this rivalry is, in fact, true.