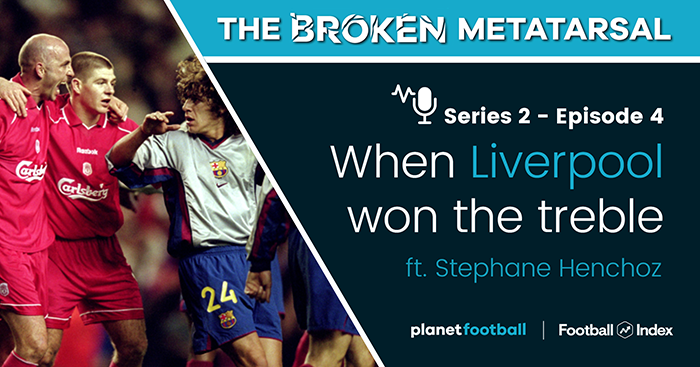 Liverpool won three trophies under Gerard Houllier in 2000-01 – and we remember the high points of that remarkable season in the latest episode of The Broken Metatarsal.

Rich Williams, Mark Holmes and Rob Conlon are joined by comedian and Liverpool fan Alfie Brown for this week’s episode to talk Gary McAllister, Michael Owen, Robbie Fowler, young Steven Gerrard and the other stars of a campaign which saw the League Cup, FA Cup and UEFA Cup all added to the Reds’ trophy cabinet.

And 22 minutes in we’re joined by one of those other key men, Stephane Henchoz, to discuss his highlights of that season, his controversial involvement in the FA Cup final against Arsenal and why Liverpool nearly threw it away against Alaves.

As always, we finish with an episode of Fact or Fiction in which Rich tries to work out which of the unlikely stories about that Liverpool team is, in fact, true.