Revealed: The 10 fastest players in the Premier League this season 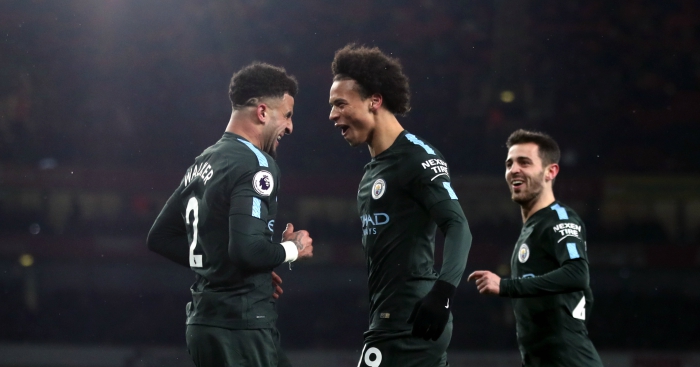 Arsenal, Chelsea and Manchester City players find themselves among the 10 fastest players in the Premier League this season.

Breakaway football is always spectacular to watch, and the likes of Liverpool and City have displayed that brilliantly this season.

Since 2014, Opta has calculated players’ sprint speeds, and the quickest players may come as a surprise.

Mohamed Salah only made it as high as 18th, while the likes of Raheem Sterling and Jamie Vardy also find themselves just outside the top 10, in 15th and 11th respectively.

We’ve taken a closer look at the 10 players to record the quickest speeds this season, including five defenders and two Crystal Palace men.

The first of five defenders to make the top 10, centre-back Koscielny sits above team-mates Hector Bellerin and Pierre-Emerick Aubameyang, who are 13th and 14th respectively in the overall standings.

Arsenal’s captain has made 25 appearances in the Premier League this season, and at 32 years of age is the oldest player inside the top 10.

Watford full-back Femenia tops Koscielny by just 0.01kmph, having made 22 appearances so far this term.

The former Barcelona and Real Madrid ‘B’ player scored his first goal in English football when he opened the scoring for his side’s 2-2 draw with Bournemouth at the end of March, having joined the club from Alaves last summer.

Another player making the top 10 in his debut Premier League season is West Brom winger Burke.

Breaking his own record as the most expensive Scottish footballer ever, the former Nottingham Forest youngster returned to England last summer after a short-lived spell at RB Leipzig.

He has struggled to rediscover the form which attracted interest from the likes of Arsenal and Bayern Munich in 2016, however, making just two league starts this sterm.

Zaha has been the catalyst for almost all things good for Palace this term, playing a significant role in their bid for survival.

The Ivorian winger is known for his pace with the ball, so it is no real surprise to see him make the top 10.

His speed and quick feet have seen him torment defences lately, netting three goals in his last three appearances.

The quickest centre-back in the division is Chelsea’s Rudiger, who is also in his debut Premier League season after joining last summer from Roma for a reported fee of £29million.

Having been left out of the side recently following criticism of Antonio Conte’s tactics, the Germany international returned to the starting XI for the midweek win at Burnley before playing 90 minutes in Sunday’s FA Cup semi-final.

England defender Walker has been a mainstay of the title-winning Manchester City side this season following his summer transfer from Tottenham.

The full-back has notched an impressive six assists in the league, but his pace may well be utilised elsewhere this summer after Gareth Southgate deployed him in a back three for England’s recent friendlies against Holland and Italy.

Walcott finally left Arsenal in January after 12 years with the club, joining Sam Allardyce at Everton in a £20million move.

The winger has scored twice and set up two more in his 11 appearances for the Toffees, while also re-establishing himself as one of the Premier Leagues fastest players.

Some unforgettable Theo Walcott contributions in the past. pic.twitter.com/88GWb5tymt

He’s been cast that far aside that you might have actually forgotten he still played for Spurs, but Sissoko is the third fastest player in the Premier League this season.

The midfielder hadn’t started a league game since January until last weekend’s 1-1 draw with Brighton, and was an unused substitute as his side suffered defeat in the FA Cup semi-final against Manchester United on Saturday.

The second Crystal Palace player to make the top 10 is Van Aanholt, who is also the fastest defender in the Premier League.

Van Aanholt has made 25 league appearances for Roy Hodgson’s men this season, with the former Chelsea youngster scoring twice.

Crowned the PFA young player of the year this weekend, Manchester City winger Sane is the fastest player in the Premier League.

Sane has scored nine goals to add to his 12 assists, and it is no surprise that the stats prove he is the quickest player in the top flight.

His speed of 35.48 kilometres an hour, recorded when challenging for a lost ball against Chelsea, is the fastest recorded since Opta began calculating the stat in 2014, topping Jamie Vardy’s previous record.