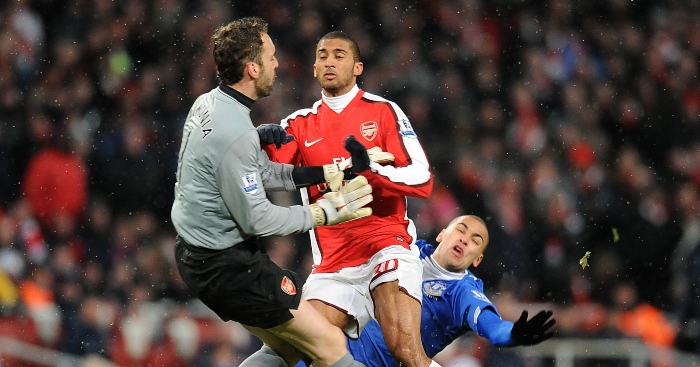 Arsenal began the 2010s in a much healthier state than they find themselves today, even if they failed to win a trophy until 2014.

After a come-from-behind victory over West Ham United in the FA Cup, the Gunners’ first league game of 2010 saw them scrape a draw at home to Everton with a stoppage-time equaliser from Tomas Rosicky.

Here’s who was involved for Arsene Wenger’s team that day, as they picked up another point on their journey to a third-place finish in the Premier League.

First-choice stopper Almunia returned against the Toffees after Lukasz Fabianski was given the nod at Upton Park.

The Spaniard had usurped Jens Lehmann in 2007, but the 2009-10 season would be the last in which he played more than half of Arsenal’s games.

He was beaten twice against Everton, with Leon Osman and Steven Pienaar scoring for David Moyes’ side.

By 2010, Sagna had long established himself as a key man for Arsenal, eventually hitting the 40-game mark in each of his first four seasons at the club.

He played all three games for Les Bleus, but they dropped out of the tournament after an embarrassing group stage display.

Arsenal’s marquee signing of the summer 2009 transfer window, Vermaelen played more games in his first season with the club than with any of his next four.

The Belgian, who arrived from Ajax, endured a horrible injury record with the Gunners and with Barcelona after leaving north London, but that first campaign brought 33 league games and an impressive-for-a-centre-back seven goals in the top flight.

Indeed, more than half of his Premier League goals for Arsenal came in that one season.

Gallas was no longer captain by 2010 but remained a part of the first team and played 26 times in the league.

The Frenchman left for Spurs in the summer, having racked up more than 100 appearances for Wenger’s side after joining from Chelsea in a move which saw Ashley Cole go the other way.

He was another member of that cursed World Cup squad, scoring the controversial goal against the Republic of Ireland to take his country to South Africa.

According to the BBC’s report, Traore just couldn’t deal with Everton debutant Landon Donovan. That ought to give you an idea of what would follow for the left-back – Donovan was good, but not that good.

At the time of the Everton game, Traore was a France Under-21 international. A year later, he was playing for Senegal.

Traore left north London after another forgettable performance, in the 8-2 defeat to Manchester United in 2011, and moved to QPR in time to almost deny Manchester City the Premier League title on the final day of the season.

He played 42 games for Arsenal in the following five seasons combined.

Nasri was only recently back to full fitness in January 2010, having suffered a broken leg in pre-season.

The Frenchman had scored his first league goal of the season just over a week earlier, finding the net in a 4-1 win at Portsmouth on December 30.

He scored just one more league goal that year, in a 1-1 draw with Birmingham in March, but also scored arguably his best goal in an Arsenal shirt during a 5-0 Champions League victory over Porto.

Denilson was at the centre of Everton’s second goal, going down in the build-up to Pienaar’s effort.

The Brazilian was withdrawn shortly after, with 19-year-old academy prospect Merida – who scored his first and only Premier League goal the following week against Bolton – taking his place.

Denilson played 20 times in the league that season, scoring a career-high four league goals including the first equaliser against Everton.

Just one month after the Everton game, Ramsey suffered a broken leg against Stoke which went on to define the relationship between the Potters and the Gunners for most of the decade.

The Welshman had scored his first Premier League goal at the start of the campaign, in a 4-1 home win over Portsmouth, and also netted in the away win over Pompey and the FA Cup win at West Ham a week before the Everton draw.

His replacement, Rosicky, scored the stoppage-time goal which earned Arsenal a point against the Toffees.

After bursting onto the scene at the end of the 2008-09 season, Arshavin had his most productive season in front of goal for Arsenal with 12 strikes in all competitions.

However, only four of those goals came after the turn of the year, including one against Bolton at the end of January.

The Russian will feel he should have been at the World Cup in South Africa, but his country suffered a surprise defeat to Slovenia in the play-offs

Eduardo was coming off a winning goal against West Ham in the cup, his eighth strike of the season as he made an impressive comeback from the serious and infamous injury suffered against Birmingham in February 2008.

The Croatia international had also scored in the 6-1 win away to Everton back in August but drew a blank in the home meeting.

He was replaced late on by Mexican forward Vela, who had started alongside Eduardo at Upton Park the previous week.