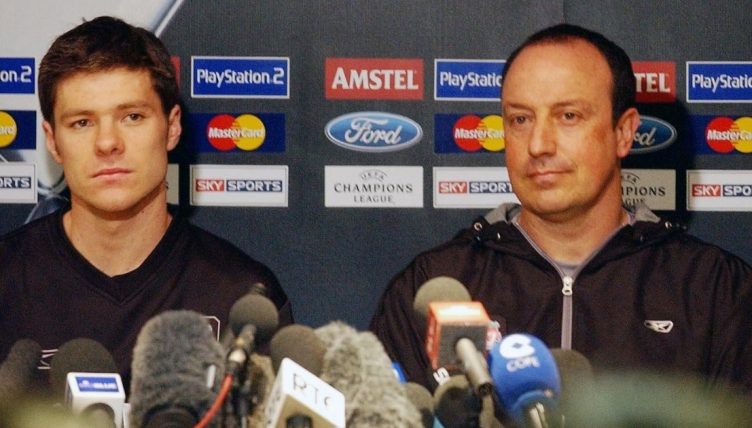 After leading the club to an FA Cup and an iconic fifth Champions League triumph, Rafa Benitez’s place as a Liverpool legend is firmly secured.

Benitez’s work in the transfer market was a huge factor in their success, although not of all his signings turned out to be a hit at Anfield.

We’ve taken a look back at the first 10 faces the Spaniard brought to Anfield to see how they fared.

Having impressed at Malaga, Josemi was first through the door under Benitez and initially found himself established in Liverpool’s starting XI.

But he received a red card in a win against Fulham and later suffered an injury that allowed Steve Finnan to cement his place as first-choice right-back.

After falling out of favour nearly completely at the start of the 2005-06 season, he was sold to Villareal in the January transfer window.

Nunez arrived at Anfield as part of the deal that saw Michael Owen head in the other direction to Real Madrid.

Things did not get off to the best of starts, however, with the midfielder injuring his knee during his first training session, a knock that kept him on the sidelines for three months.

He left the club just a year after arriving but did so with a unique Liverpool record. Nunez remains the only player in the club’s history to score his first and only goal in a cup final, finding the net as the Reds were beaten 3-2 by Chelsea in the League Cup.

Benitez made some shit-hot signings for Liverpool, but none were better than Alonso. A midfield boss and the scorer of some truly underrated goals.

Read: Sure, Xabi Alonso’s passing was good, but have you seen his goals?

Having helped Benitez guide Tenerife to promotion in Spain three years earlier, it was no big surprise to see Garcia rock up on Merseyside in the summer of 2004.

The winger played an integral role in their run to Champions League glory in 2005, scoring a stunning goal against Juventus and the infamous ‘ghost goal’ against Chelsea in the semi-finals.

In total, Garcia netted five in the knock-out stages of that year’s tournament. He also scored the third in their 3-1 win against CSKA Moscow in the Super Cup.

His subsequent seasons may have underwhelmed in comparison but one season was all it took to secure Garcia’s place as a club icon.

The experienced centre-back became the first Argentinian to play for Liverpool when he was reunited with his former Valencia boss in January 2005.

Pellegrino played 13 times for the Reds in the remainder of the campaign but was cup-tied for the Champions League run. Subsequently, the future Southampton boss did not do enough to secure a long-term deal and was released at the end of 2004-05.

Like Pellegrino, Morientes also found himself cup-tied for the Champions League following his arrival from Real Madrid in January 2005.

The former Spain international stayed at Anfield until the end of the 2005-06 campaign, leaving for Valencia with just 12 goals in 60 appearances in all competitions.

Carson was brought in from Leeds United in the January transfer window of 2004-05 to provide competition for Jerzy Dudek, and he proved to be a reliable recruit.

His most notable spell came in April 2005, when he played three consecutive matches including the home leg of the Champions League quarter-final clash with Juventus.

The goalkeeper was unable to establish himself as their No.1 and left for West Brom in 2008 following three loan spells away from Anfield.

Despite watching Jerzy Dudek’s heroics in Istanbul, Benitez wanted a new No.1 and decided to sign Reina from Villarreal a few weeks later.

The goalkeeper went on to keep 134 clean sheets in 285 Premier League appearances for Liverpool but Benitez was not convinced by his abilities to play in midfield.

Liverpool poached Barragan from Sevilla’s academy in the summer of 2005 before he had even appeared for Los Nervionenses.

He made his senior debut in a Champions League qualifier against CSKA Sofia, becoming the youngest foreign player to appear for Liverpool.

But that was the full-back’s one and only sighting in the Reds’ first team, and he joined Deportivo de La Coruna in 2006.

Signed on a free transfer from Middlesbrough, Zenden made a promising start to his Liverpool career before a cruciate ligament injury halted his progress.

He returned for the start of the 2006-07 season, helping Liverpool reach the Champions League final with a converted penalty against Chelsea in the semi-final shootout.

The midfielder started the final defeat against AC Milan and was then released by the club, joining Marseille on a free transfer.