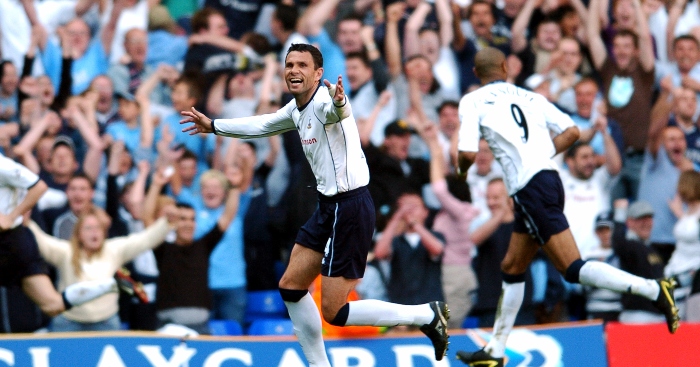 Arsenal remain the only team to go an entire Premier League season unbeaten, but they didn’t have it all their own way in 2003-04.

The Gunners finished on 90 points with 26 wins and 12 draws, with their longest winning streak during the campaign a healthy if unspectacular nine.

We’ve looked back at the 12 games they failed to win – not that they’ll be too bothered.

A home draw with a newly promoted side doesn’t scream ‘champions-elect’, but football works in strange ways.

A 37-year-old Teddy Sheringham put the visitors ahead at Highbury, only for Thierry Henry to equalise from the penalty spot before half-time… at the second time of asking, after his first spot-kick was ordered to be retaken due to encroachment.

Arsenal were closer to finding a winner, but both teams left the pitch with their unbeaten records intact. Portsmouth’s did not continue for another eight months, as you may have guessed.

It could have been over so early, if only Ruud van Nistelrooy had converted his penalty in the Battle of Old Trafford.

Martin Keown felled Diego Forlan in the box in the final minute, just as Arsenal – reduced to 10 men when Patrick Vieira picked up a second booking – looked like they’d held out for a point.

However, Van Nistelrooy smacked his penalty against the bar, prompting Keown to… sure, let’s call it a celebration.

The Charlton game was almost a mirror image of the meeting with Portsmouth, with Henry equalising just before half-time following an opener from a Premier League veteran.

It was Paolo Di Canio who put Charlton ahead, converting a penalty after Lauren brought down Matt Holland, only for Henry to beat Addicks goalkeeper Dean Kiely with a free-kick.

Arsenal would waste no time in the reverse fixture against Charlton in February, taking a two-goal lead inside the opening five minutes.

Fulham were the first team to stop Arsenal scoring at home in 2003-04, and indeed the first since Middlesbrough in April 2001.

The goalless draw was made all the more surprising by the fact it came immediately after the memorable 5-1 win away to Inter Milan in the Champions League.

Arsenal had 27 shots against the Cottagers, 12 of them on target, but were denied by Edwin van der Sar each and every time.

Had the trip to Leicester ended a minute or two earlier, Arsenal could have been looking at a 92-point season.

Gilberto Silva put the Gunners ahead in the second half, but Ashley Cole’s red card made for a nervy final few minutes.

Just seconds from full-time, Craig Hignett beat Jens Lehmann to a James Scowcroft knock-down to draw the Foxes level. It wouldn’t matter come May, though, with Leicester finishing six points adrift of safety and dropping down to the second tier.

Bolton were surprise top-half finishers in 2003-04, having narrowly escaped relegation the previous season, and they’d won at Chelsea the week before welcoming Arsenal to Lancashire.

Robert Pires put Arsenal ahead at the Reebok Stadium, but Henrik Pedersen equalised for the hosts inside the final 10 minutes.

It meant that, despite being unbeaten, Arsenal did not hold top spot at Christmas – that honour went to Manchester United, who boasted 40 points to the Gunners’ 39.

David Moyes’ Everton were in the midst of a difficult season, eventually finishing just one place above the bottom three, but they still managed to hold Arsenal at Goodison Park.

Kanu put the visitors ahead, with what would end up being his last ever goal for Arsenal, only for Tomasz Radzinski to equalise 15 minutes from time,

The BBC described the Gunners as having extended their “unbeaten start to the season,” which left us wondering when it stops being a ‘start’. After the 20th game of the campaign, apparently.

After failing to take their chance at Old Trafford, United found themselves playing catch-up when they took on an Arsenal side coming off nine straight wins in March.

It was very nearly 10, with Henry – who else – breaking the deadlock early in the second half. However, Louis Saha found a late equaliser to keep the title race just about alive.

Arsenal weren’t going to throw away a seven-point lead (over Chelsea) with eight games left, though – that’s more of a Man Utd thing.

Newcastle had run Arsenal close at Highbury before falling to a 3-2 defeat, and held Manchester United to a goalless draw at Old Trafford, so this can certainly feel like one of Arsenal’s ‘better’ draws.

It could have been the moment Arsenal slipped up, having dropped out of the Champions League a week earlier, but they kept Alan Shearer at bay with the striker coming off four goals in three games.

Thierry Henry came closest to giving Arsenal all three points, hitting the post in the second half, but a point would be enough.

The game which secured Arsenal’s league title was also the only draw which wasn’t 1-1 or 0-0.

Patrick Vieira and Robert Pires had the Gunners cruising at the break, only for Jamie Redknapp to halve the deficit and Robbie Keane to fire home an equaliser from the penalty spot deep into stoppage time.

In normal circumstances, Arsenal might have been angry about throwing away a two-goal lead against their local rivals, but there were bigger things at stake.

A mid-table Birmingham side without a win in five weren’t the obvious contenders for the last team to deny the Invincibles victory at Highbury, but here we are.

Arsenal had won 3-0 at St Andrew’s earlier in the season, helped by a fourth-minute opener, but no such excitement was forthcoming in April.

It was a game of few chances, with Jose Antonio Reyes flashing a volley wide, and the afternoon was most notable for Martin Keown drawing closer to the 10 games needed for a league winners’ medal.

There’s your quiz question answer – the two teams to avoid defeat against Arsenal that season were Manchester United and… Portsmouth.

Pompey even led for 20 minutes before Arsenal remembered the importance of that unbeaten record, with Yakubu putting the home side ahead before the break, only for Reyes to equalise early in the second half.

Arsenal won their last two games, away at Fulham and at home to Leicester, to seal an unforgettable season.