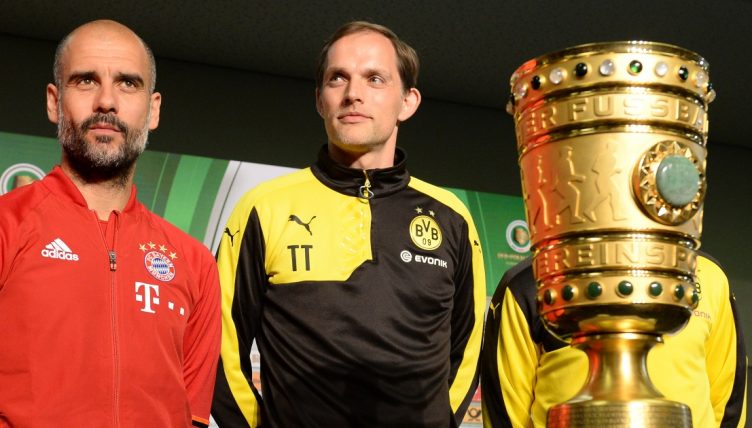 Pep Guardiola and Thomas Tuchel have pitted their wits against one another seven times, with each previous meeting set to be dwarfed by the Champions League final between Manchester City and Chelsea.

Tuchel’s Chelsea have beaten Guardiola’s City twice already in 2021, with a 1-0 FA Cup semi-final victory at Wembley followed by a 2-1 comeback win in the Premier League.

Only once before this season’s FA Cup clash have they met in knockout competition – the 2016 DFB Pokal Final, Guardiola’s last match in charge of Bayern Munich, which saw him depart with the cup after a 120-minute tactical stalemate had ended goalless. Here’s exactly how it went.

The two deeply analytical coaches famously have a lot of respect for one another, having first met in 2013 when Tuchel was still making a name for himself at Mainz and Guardiola had taken over at Bayern.

Mainz were beaten 4-1 away and 2-0 at home, but the Bayern boss saw something in the up-and-coming tactician and the pair met for dinner during the 2014-15 season, in which Tuchel took a leaf out of Guardiola’s book and recharged his batteries with a year-long hiatus.

The pair are said to have spoken for four hours, with staff apparently reticent to disturb them, such was the intensity of their discussion. As he had done with Marcelo Bielsa, Guardiola spoke passionately about the intricacies of football with a competitor he had great respect for.

But they were soon set to lock horns in the dugout again, when Tuchel was appointed as Jurgen Klopp’s successor at Bayern’s arch-rivals Borussia Dortmund.

After a disappointing 7th-placed finish in Klopp’s final season, Tuchel instantly took them back to their rightful place, finishing in the top two, with a 78-point tally that had only ever been bettered at Dortmund by Klopp’s 2011-12 title-winning side.

But they’d finished 10 points behind Bayern, who were an unstoppable juggernaut during Guardiola’s three years at the helm – although they’d lost three Champions League semi-finals in a row, with an agonising away goals loss to Diego Simeone’s Atletico Madrid in his final year.

“Thomas lives football,” Guardiola said in a joint interview with the DFB ahead of the match. “He has this passion, this will to want to know everything, to get better and better. He thinks about his team, his opponent and football in general 24 hours a day. I appreciate that about him.”

“The structured positional play, the passing rhythm, the receiving and taking the ball and the absolutely bravest and most diligent defending of top stars that I had seen up until then. Check out these games – you can learn all about soccer,” Tuchel reciprocated the compliment, talking about Guardiola’s Barcelona.

Earlier in the season, Guardiola’s Bayern had thrashed Tuchel’s Dortmund 5-1 at the Allianz, with a fluid 3-5-2 shape and Robert Lewandowski and Thomas Muller wreaking havoc up top.

Tuchel made a subtle change for the reverse fixture, adapting from a 4-3-1-2 to a 4-3-3 that proved more adept at frustrating Bayern’s dangermen in a goalless draw.

But he tried something else for the cup final, bringing in future Arsenal defender Sokratis Papastathopoulos alongside usual suspects Sven Bender and Mats Hummels in the backline, packing the defence and midfield and going with a 3-4-2-1 shape that’s similar to his favoured shape at Chelsea.

Star striker Pierre-Emerick Aubameyang led the line, while Henrikh Mkhitaryan – 2015-16’s Bundesliga player of the year, having notched 11 goals and 15 assists – played in a supporting role alongside Marco Reus.

Guardiola went with a 4-1-4-1 system, opting for Arturo Vidal rather than veteran Xabi Alonso at the base of midfield, with Thiago and Muller further forward, Franck Ribery and Douglas Costa offering width, and Lewandowski up top as ever.

The talismanic Arjen Robben, Bayern’s match-winning hero of the Klassiker Champions League final three years prior, was unavailable due to an abductor problem.

The match itself turned out to be a somewhat cagey affair, and remained goalless throughout. But it was Bayern, as Guardiola sides invariably do, that took control, dominating possession and territory.

The Bavarians registered 70% possession and 17 attempts, eight more than the opposition, but the shots on target perhaps the most telling statistic: just three from Bayern, and one from Dortmund. In 120 minutes of football.

It was a game defined more by the defences: Sokratis and Bender in particular were prolific in terms of tackles, interceptions and clearances in something of a backs-to-the-wall counter-attacking display.

Aubameyang played the entire game for Dortmund, but he was isolated and ineffective, registering just 18 touches and six passes, with all three of his attempts off target.

After a long and gruelling campaign, the intensity was lost from both sides during extra-time, which seemed to resemble both sides running down the clock to take their chances in the shootout. Guardiola had made just one change, bringing off Ribery for the considerably younger Kingsley Coman in the 108th minute.

Kagawa, Aubameyang and Reus scored their penalties, but Bender and Sokratis – who did so well to keep a clean sheet – failed to convert, the former denied by Manuel Neuer and the latter sending his effort wide of the post. Joshua Kimmich missed for Bayern, but four out of five was enough, with Douglas Costa stepping up to score the decisive spot-kick.

Our 2016 DFB Pokal Final win had everyone on the edge of their seats. 👏#MiaSanMia pic.twitter.com/ldN22xRxLv

“We still have a lot to learn,” Tuchel told Dortmund’s official website after the final whistle.

“It teaches you a lot to play in this final. To see how sharp Bayern was right from the start, even if the level was not as high as when we met them in the league in the second half of the season. This match gives you a lot to think about. We still need more belief in ourselves and determination when we are in possession.

“We did work very hard and we defended with passion. But you also need to give yourself a breather when you are in possession, we did not have enough of those. I am sorry that I allowed Bender and Sokratis to take the second and third penalties.”

Man City-bound Guardiola was moved to tears during the trophy presentation, having ended his three-year tenure in Germany on a high note.

“It’s been an amazing three years at this club and I’ll miss the players so much,” he said.