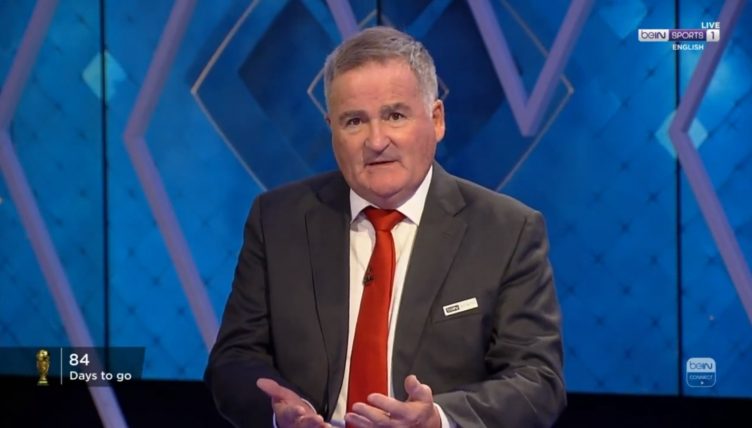 Arsenal and Mikel Arteta have not just made themselves favourites for the Premier League, they’ve ruffled the feathers of a certain Richard Keys in the process.

Keys, who fronted Sky Sports’ coverage of the Premier League between 1992 and 2011, is now working in Qatar for beIN SPORTS and has been critical of Arsenal and their manager on a number of occasions.

And the Gunners faithful have ridiculed and mocked Keys in equal measure, creating the season’s most delicious mutual hatred.

We can imagine the hairy-handed one licking his lips as Arsenal slipped to defeat at Manchester United in September, ruining their 100% record in the Premier League, while Arsenal fans ridicule Keys with each successive victory.

In this spirit, we’ve taken a closer look at the roots of Keysie’s grudge against the Gunners and their current manager.

Despite his immense career, Ozil was little more than a Fortnite enthusiast by October 2020 and Arteta was intent on freezing the playmaker out of his first team squad.

But, with Arsenal struggling at the wrong end of the Premier League table, Keys used his extensive managerial experience to offer Arteta some advice on player management.

“I don’t think you need to get to this stage,” he told beIN SPORTS viewers. “The thing that upsets me is that Arteta, particularly, there is better ways to deal with it than that.”

While Andy Gray, unexpectedly cast as the voice of reason, opined his feeling that “the bridges were burnt between Arteta and Ozil,” Keys somehow resisted the urge to speculate on how Sam Allardyce would’ve dealt with the situation.

Yes, we’ll give Keysie this one; it was strange that Arsenal chose Arteta over Carlo Ancelotti in December 2019 especially given the latter’s success with Real Madrid.

But it was also clear that Arsenal wanted a longer-term manager to completely revitalise their club. And Ancelotti did leave Everton up sh*t creek without a paddle when he left for Spain last summer.

Perhaps Arsenal made the right decision overall. Just don’t expect Keys to believe a word that comes out of your brain-washed mouth.

Did Arsenal get the wrong man in Mikel Arteta? @richardajkeys suggests the manager they should have signed! #beINPL #ARSWBA

Irritating? What could Keys possibly find irritating about a rich, talented, respected and conventionally handsome man like Arteta?

Well, his disregard of technical area etiquette, if his reaction to Arteta’s behaviour during their victory over Manchester United in April 2022 is anything to go by.

This was the moment, above all others, when Keys’ vendetta took a personal turn and the rest of us began stockpiling popcorn in anticipation of what would happen next.

And why is this irritating man allowed to spend 90 minutes outside of his technical area? Can’t the 4th see this? 🤷‍♂️🤷‍♂️ pic.twitter.com/Gq2mXRUFUm

Having made it clear that Arteta’s mere existence irked him, Keys relished the opportunity to stick the boot in following Arsenal’s crucial defeat at Tottenham in May.

The 3-0 reverse, that’d ultimately cost the Gunners a Champions League place, saw Keys label Arteta as ‘mini-me’ alluding to the fact that he believed the Arsenal boss to be nothing more than a second-rate Pep Guardiola. Meow.

Mini-me wasn’t very happy was he? He’s got a point. How dare the opposition try to win? 😂😂. He’s just like Guardiola there. Ok. Pen was soft – but he should’ve taken Holding off. That was his fault. Well done @GeoffShreeves Still the master in the tunnel.

“Steady, it’s Fulham,” Keys said to Gray, during beIN SPORTS’ post-match coverage of Arsenal’s 2-1 victory. “And they trailed at one time.

“Yeah, well played, you came back to win it and they keep their 100 per cent record intact. But they haven’t won the [Premier League] title tonight. They have won a London derby.

“They’re four games into the season. Look at the manager. I can’t hide the fact I find him extremely irritating, waving his arms around like a windmill for 90 minutes, as if anybody can hear him.

“Enjoy it, but I don’t understand this. They’ve beaten Fulham. They’ve won nothing. They’ve over celebrated this.”

Richard had spoken. Settle down, everybody.

As Xabi Alonso can testify, Nigel de Jong isn’t one to pull out of a challenge. So, when Keys attempted to backtrack slightly after his Fulham rant, the former Netherlands midfielder held the knitted puppet to account in characteristic style.

Don’t believe us? Just soak in 150 seconds of Keys getting his backside handed to him. Even Gray joins in.

Richard Keys is still going on about the Arsenal 🤷🏻‍♂️🤣

As funny as this was, you can imagine Keys reacting to the news with a nauseating amount of self-satisfaction. Even from Qatar, he’d managed to get underneath the skin of an entire fanbase and drag them down to his level.

And the 65-year-old couldn’t resist another jab in the ribs of Gunners enthusiasts just over 24 hours later.

Also, it’s worth noting this was his attempt at self-deprecating humour. Jesus.

At last the window has ‘slammed shut’. I felt for Arsenal fans – nothing to celebrate on deadline day. 🤷‍♂️😂.

Just like England in countless major tournaments, Arsenal lost against the first half-decent opposition they’d faced all season as United administered a 3-1 defeat at Old Trafford.

But, like a clockwork toy gamely carrying out his duties despite being mauled by a cat, Keys stuck to his guns and called out Arteta’s inclination to go walkies on the touchline once again.

Expect a dossier, complete with diagrams and screenshots, on the FA’s desk by the end of today.

Why is Arteta allowed to spend the game on the touch line? Again today – in front of the 4th official as well. Does he has special dispensation? pic.twitter.com/PYqrpFvb9s

As Arsenal kept winning, and Arteta kept bouncing around on the sidelines like a kangaroo that’s just necked a tube of Smarties, Keys continued his one-man crusade against the root of all world evil.

In response, Martin Keown showed all the ruthlessness of his playing days by two-footing the beIN presenter.

Arsenal were fined by the FA for the behaviour of their referee-surrounding players during an FA Cup tie at Oxford.

Keys wasn’t about to pass up this open goal…

When there’s no discipline nor example of how to behave coming from the coach what do people expect? This is The Arsenal – a classy outfit – like the coach – out of control. It’s sad to witness. https://t.co/ok3jeISB6Z

Most people watching Aaron Ramsdale getting kicked by a Tottenham fan at the end of January’s derby blamed the latter for the regrettable incident.

Not Keysie. In Richard’s universe, Arteta is responsible for global warming, the cost of living crisis and the decisions of dim-witted supporters.

“Ramsdale’s got form for winding supporters up and apparently has been having an exchange during the course of that second-half with those Tottenham fans. Ben White as well who was over there,” he said.

“You know, 2-0 to Arsenal, you know, that. My fear is and I’ve said it for a long time now, that the guy in the middle there [Arteta] is the one that’s most to blame for the inflammatory behaviour on the touchline.

“And if he’s not behaving himself, then it’s likely that others in his team are not going to either. Who ultimately then becomes the master of discipline? That isn’t anyone.”

Richard Keys has actually blamed Arteta for a Tottenham fan kicking Ramsdale. Even for him, this has to be a new low, which says a lot given what he did to his family. His anti #Arsenal agenda is sensational. #afc

Never mind the World Cup in Qatar, seeing Arteta getting cautioned was definitely his highlight of the season.

READ MORE: Seven Arsenal players Piers Morgan has ripped into – & how they bit back