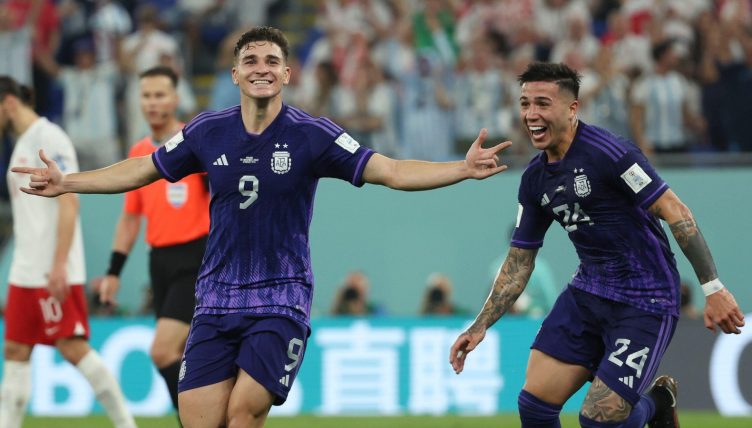 West Ham often claim they won the 1966 World Cup for England, and River Plate can boast a similar shout with Argentina’s 2022 triumph.

Only one River Plate player – back-up goalkeeper Franco Armani, who didn’t get any minutes in Qatar – actually made Argentina’s squad. But the club helped develop several of Lionel Scaloni’s World Cup winners.

The Buenos Aires giants have enjoyed some extraordinary success under influential coach Marcelo Gallardo. He left earlier this year but helped nurture some exceptional young players.

Here’s a superb XI of players that River Plate have sold on in recent seasons.

Admittedly we’re not getting off to the best start here, because River Plate haven’t let any goalkeepers of note go in recent years. So without any alternatives, Los Millonarios academy graduate Velazco goes in net. He made just one appearance for his boyhood club, and in 2021 joined Cobreloa – who play in the Chilean second tier – for a small fee.

Bear with us, this team does get better.

Montiel might not have not have torn up any trees joining Sevilla from River Plate last summer, but he’s scored a World Cup-clinching penalty for Argentina.

Things don’t get bigger than that. He’ll never have to buy another Quilmes as long as he lives.

Like Montiel, Pezzella plies his trade in the city of Seville, but for their city rivals Betis.

He joined Los Verdiblancos from River Plate back in 2015 and is now enjoying his second stint with the La Liga club.

The 31-year-old lifted the Copa del Rey last season and was part of Argentina’s World Cup-winning squad, with three appearances off the bench in Qatar. Pezzella was introduced in the final just moments before Kylian Mbappe’s late equalising penalty.

The defender won the Copa Libertadores with River Plate in 2018 and was named in the team of the tournament the following year.

Quarta won his first of 11 international caps in 2019 and was part of the Albiceleste’s 2021 Copa America-winning squad. In October 2020, he joined Fiorentina and has been a steady stalwart in the Serie A club’s backline ever since.

The Uruguayan spent one season with River Plate back in 2017-18. He did enough during his stint at the Monumental to catch the eye of RB Leipzig’s scouts and sealed a €12million move to the Bundesliga club.

Saracchi hasn’t quite shone in Europe as many expected – he hasn’t been capped by Uruguay since 2019 and earlier this year joined relegation-bound Levante – but he was undoubtedly a talented prospect and may yet kick on.

Those that watched Enzo shine in River Plate’s 2021 Argentine Primera Division title win will tell you he was destined to be a star.

The River Plate academy graduate has enjoyed a meteoric rise in 2022. He only made his international debut in September, his first start in the third group stage game, and then played every single minute of Argentina’s glorious run through the knockouts.

Enzo joined Benfica for about €12million in the summer and is already worth many more times that now. The kid’s a superstar.

The midfielder made one appearance for Argentina – the 2-0 win over Mexico – during their 2022 World Cup triumph.

Rodriguez came up through River Plate but left for Mexico as a teenager. He spent four years at Tijuana and Club America before joining Betis in 2020, showing enough about him in La Liga to reportedly catch the eye of Arsenal’s scouts.

Maybe the best of the lot.

Like his former River Plate team-mate Fernandez, Argentina seemed to go up a level or two once Duracell Bunny Alvarez made himself undroppable to Lionel Scaloni.

“We are incredibly happy for him. Congratulations to him, Nicolas Otamendi, Lionel Messi and for Argentina. Well deserved Champion,” Manchester City boss Pep Guardiola said in his first press conference after the tournament.

“Julian is with us and we are delighted because he played a lot. We have a world champion in our team.”

It almost doesn’t feel fair that City signed Alvarez and Erling Haaland in the same summer.

🤩🇦🇷 What a way for the club to celebrate their 1⃣2⃣1⃣st birthday! pic.twitter.com/LX5CfWXnar

Last summer he returned to Europe for a second stint, joining Eintracht Frankfurt. In his first season with the Bundesliga club, he won the Europa League, was named in the competition’s Team of the Season and scored the decisive fifth penalty in the shootout victory over Rangers.

Shunted out to the left, where he occasionally slotted in at Spurs, for the purposes of this XI. The Buenos Aires-born winger left River Plate way back in 2011, joining Roma.

During his 11 years in Europe, Lamela hasn’t won any silverware – he’s been a runner-up in the Champions League, Premier League, League Cup and Coppa Italia – but he has at least picked up a Puskas Award for a rabona scored in a north London derby. Sounds about right.

You've seen his Puskás winner, but that's not a one off. Using your weak foot is overrated. pic.twitter.com/OxqNpoGT4L

Simeone joined River Plate’s youth set-up as a teenager when his father Diego was in charge. Gio ended up staying put longer than Cholo, who resigned in 2008, and he eventually made his debut as an 18-year-old in the summer of 2013.

The striker featured on the periphery as River Plate won the Argentine Primera Division, Copa Campeonato and Copa Sudamericana. In 2015, he finished as the top scorer with nine goals as Argentina’s Under-20s won the South American U-20 Championship, and in 2016 followed in his father’s footsteps, departing Argentina for Italy.

He’s scored 69 goals in 223 Serie A appearances and has made five senior appearances for his country, all in 2018. Simeone is currently playing a part in Napoli’s Scudetto push, but he missed out on Scaloni’s squad for Qatar 2022.