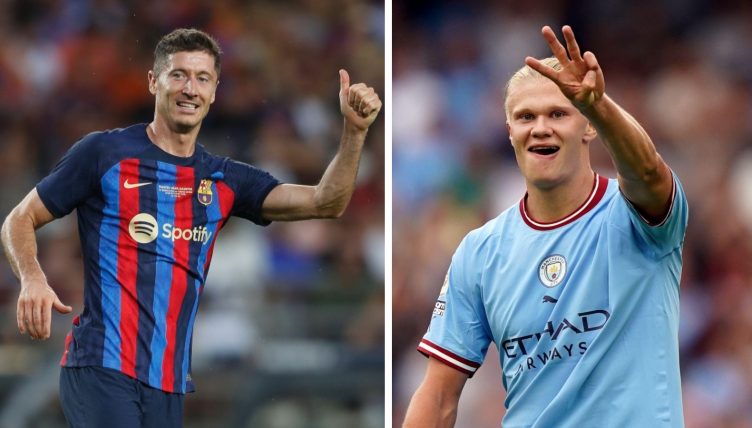 Robert Lewandowski and Erling Haaland have arguably been the two most lethal goalscorers of the 2020s so far – and the numbers bear that out.

There’s 12 years difference between the two strikers, with 34-year-old Lewandowski surely set to start winding down in the coming years while 22-year-old Haaland is well on course for a wildly prolific and successful career ahead.

The pair of goalscorers spent a couple of years as rivals at two of the Bundesliga’s biggest clubs. When Haaland arrived at Borussia Dortmund in January 2020, Lewandowski had already established himself as one of the best strikers in the history of German football – second only, in fact, to Bayern Munich legend Gerd Muller.

Haaland was still just a teenager when he signed for Dortmund midway through the 2019-20 campaign but had already proven himself one of the most promising players of his generation. He’d scored 29 goals in 27 appearances for Austrian champions Red Bull Salzburg, including an unthinkable eight in his first six appearances in the Champions League.

The Norwegian instantly lived up to the hype in an iconic debut for Dortmund, scoring a hat-trick in the space of 20 minutes after being introduced as a substitute. He turned the game in a 5-3 victory over Augsburg.

But Bayern, powered by the goals of Lewandowski, continued to dominate domestically. They’ve since made it to 10 successive Bundesliga titles, while the Polish striker was their star man during their treble-winning campaign of 2019-20 – Lionel Messi later admitted he deserved the Ballon d’Or for his exploits that season.

Bayern actually attempted to sign Haaland as a long-term successor to Lewandowski, but the rising star chose Manchester City instead.

“If I try to imagine how Lewandowski thinks…” Haaland said in the Haaland: The Big Decision documentary.

“I don’t know how many goals and titles he has for the club. Then I do actually feel a little sorry for him. At the same time it’s a chance for him to take the next step in his career. It feels disrespectful, but at the same time it is an opportunity for him”

Lewandowski has since departed for Barcelona, and the two players have each made ridiculous goalscoring starts for their new clubs – it would be a major shock to see anyone else challenge them for the European Golden Shoe this season.

But how do the two players compare? We’ve gone back to the turn of the decade, January 2020, when Haaland signed for Dortmund, to compare their goalscoring records for their respective clubs.

READ NEXT: Remembering when Erling Haaland scored three hat-tricks in *one* game