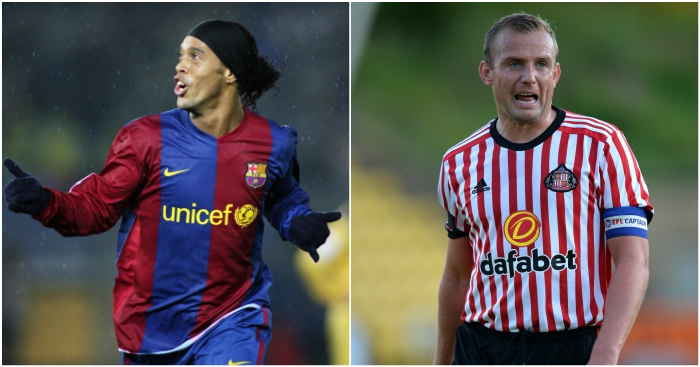 Former Liverpool, Arsenal and Manchester United players are among those who share birthdays with talents which seriously make you question the validity of star signs and horoscopes.

Apparently you can tell a lot about a person by their star sign. And even if you don’t believe it, it probably doesn’t stop you getting mildly excited when you learn someone you like shares a birthday with you.

According to The Internet, Aries can be described as “courageous”, “confident”, “enthusiastic” and “optimistic”.

Step forward Ronaldinho, quite possibly the most fun and entertaining footballer of all time. A man it was impossible to watch without feeling your heart flutter. Even the Bernabeu had to stand to applaud him as a Barcelona player.

But Aries, like the rest of us, have their weaknesses, namely being “moody”, “short tempered”, “impatient” and “aggressive”.

Step forward Lee Cattermole, emitting steam from his ears and whistling like a kettle at the thought of someone trying a Rabona. A man who earlier this year was shown to be statistically the dirtiest player in Premier League history.

The dirtiest player in Premier League history? That would be #SAFC's Lee Cattermole, according to these statistics… https://t.co/MUdBl6aVmy

A national hero who has travelled around the world, winning titles in different countries, earning admirers and wowing supporters with his miraculous twists and turns.

But enough about Ragnar Klavan, Diego Maradona was also born on October 30.

He may not have contributed a great deal to Manchester United’s 1998-99 campaign, making only nine appearances in all competitions, but David May could probably be justified in thinking he is the only person born on June 24 to have won a treble.

But then along came Lionel Messi, who went and won two of the bloody things.

17 years since United won the third leg of the treble. Kids everywhere wonder how good David May must've been.

Depending on where you stand, footballing mavericks are either one of the greatest parts of the game or a shameful waste of talent and potential.

We fall firmly into the former category, and May 24 gave us two of the best and most extreme examples.

Eric Cantona may have eventually found glory – albeit amid no little controversy – at Manchester United, but he remained enigmatic until the end, shocking the world by retiring at 30.

Adel Taarabt, meanwhile, also had the potential to achieve anything in the game. But, barring a golden season at QPR, his greatest achievement has been an innate ability to make your dad furious.

Has there ever been a more lithe, silky playmaker than Rui Costa? Described by Daniel Storey as “never consistent but always capable of the sublime and therefore eminently watchable”, the Portuguese was brilliantly enigmatic.

Has there ever been a fatter arse in football than Sean Gregan’s? A man whose signing for West Brom was described as “like putting lipstick on a pig” by Rodney Marsh.

It’s hard not to feel an affinity with Lucas Leiva. The midfielder just seems really quite nice. He worked hard. He was loyal. He went from being a punchline to a fan favourite. He converted himself to a centre-half.

It’s hard not to feel shit-scared of Gennaro Gattuso. The midfielder just seems really quite angry. He worked hard. He played for a dominant Milan side. He won the World Cup. He snarled. He kicked. He even tried to fight Joe Jordan.

Rightly or wrongly, many people would describe the stereotypical Stoke City player as a tough-tackling brute of a man, a player who, although talented by most people’s standards, has got to where they are in the game through sheer bloody-mindedness and a determination to overcome his flaws.

Rightly or wrongly, many people would describe the stereotypical Arsenal player as exceptionally skillful but almost certainly short and lacking the necessary consistency to get to where their talent really ought to take them.