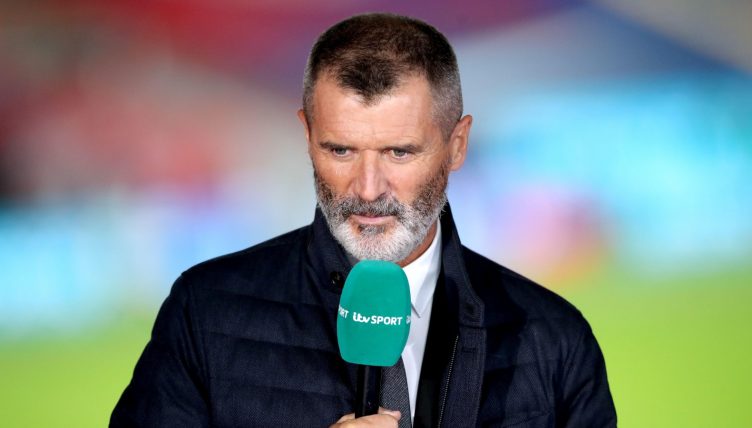 Forget Kylian Mbappe, Richarlison & Lionel Messi, the real star of the 2022 World Cup has been Roy Keane – we cannot get enough of the former Manchester United captain in Qatar.

Keane has bought his unique mix of forthright speaking and no-nonsense attitude to the World Cup, treating ITV viewers on a daily basis with his takes on various issues.

And we cannot get enough of the 51-year-old tackling the various World Cup protests in the exact same way he analyses midfielders not putting in a shift in. Marvellous stuff.

Here’s every reason why Keane has been the MVP of Qatar 2022 so far.

The former Republic of Ireland captain didn’t mince his words when it came to players not taking a booking for wearing the OneLove armbands.

“I think the players could have done it for the first game and taken the punishment, whatever that might be,” Keane said on ITV.

“Take your medicine and then the next game you move on and you don’t wear it because you don’t want to get suspended.

“I think it was a big mistake. I think both [sets of] players, we’re talking about England Wales here, should have stuck to their guns and done it, whatever pressure from outside and their own associations. Have the belief, if that’s what you believe then go with it.”

"That would have been a great statement!" 🙌

“It’s a gesture and it’s a start but I think they can do a lot more. They say they have been silenced. By who? By who?” Keane added when Germany engaged in a protest by covering their mouths in their team photo ahead of their opener against Japan.

“It’s a gesture and it’s a start but they can do more.”

🗣 "It's a gesture and it's a start… They say they've been silenced but by who? Use your voice! Wear the armband! We always say leadership is about action!@IanWright0 & Roy Keane discuss Germany's pre match stand pic.twitter.com/bMDRFBQCy3

A lack of quality is forgivable, but a lack of effort is unforgivable in Keane’s metaverse.

It also afforded him the chance to piss on England’s chips, which is an unmissable opportunity for any proud Irishman.

While some pundits – cough, Gary Neville – have taken a mealy-mouthed, fence-sitting approach to Qatar, Keane tackled the issue with typical single-mindedness.

“The corruption, regarding Fifa, you’ve got a country, the way they treat migrant workers, gay people.

“The bottom line is, we are talking about common decency, how you treat people. Football, the greatest sport in the world, there is so much money involved, there will be corruption but let’s get back to basics, you have to treat people with decency.

“It should start and finish with that.”

"The World Cup shouldn't be here, you've got a country and the way they treat migrant workers, gay people. We're on about spreading the game but dismissing human rights, it's not right. It shouldn't be here."

Powerful words from Roy Keane about the World Cup in Qatar pic.twitter.com/lAUbItPC0Z

“You’ll learn a lot more if you listen rather than talk all the time.”

That’s the bravest thing Souness has done since planting that flag during an Istanbul derby.

🍿 Get your popcorn out!

Manchester United acted like a spoilt toddler as the eyes of the footballing world left them for a single second, canceling Cristiano Ronaldo’s contract and announcing the Glazers were looking to sell up during the Mexico-Poland borefest.

The news broke while Keane was sadly off-air, but the United legend didn’t hold back when asked about the developments at Old Trafford.

“The new manager was never going to play him,” Keane said before Germany’s defeat to Japan. “You cannot have Ronaldo as a sub or a fringe player. it’s just not right. it’s sad but these things happen.

‘I don’t think it’s been great management. It’s been a difficult situation but I don’t think the manager comes out of it well. People always praise the manager down stating that he “put a marker down” but part of management is looking after the top players.

💬 "Ronaldo should have left in the summer"

😬 "I think they're better without him!"

🔊 Get the sound on for a couple minutes of gold with Roy, Karen & @IanWright0 debating the Man Utd x Cristiano Ronaldo debacle ❌ pic.twitter.com/hyfpCs45Ng

"Nice to see England get a taste of their own medicine… they've took players: Rice, Grealish" 😬

Don't get Roy started on that one 😅#ITVFootball | #FIFAWorldCup pic.twitter.com/jJ0waAfNy8

With Portugal struggling to break down Ghana, Keane two-footed them like he used to do to Patrick Vieira at Highbury.

"I think we could have played out there" 😅

Roy Keane & Graeme Souness expect more from this Portugal side in the second half#ITVFootball | #FIFAWorldCup pic.twitter.com/s5Zrqja3hI

“We could be here all night making excuses,” Keane said after England’s disappointing goalless draw against the United States.

“If you’re a professional footballer that’s what you have to do, you play in different conditions and different systems. They were playing darts last night before the game.”

"We'll see if they're laughing in a few weeks" 😐

After watching Di Maria’s error-strewn performance against Mexico, Keane ripped into him like a recently-released hostage attacking a bucket of KFC chicken.

“He’d break your heart, I am not sure he’s got one,” Keane spluttered.

We’re getting up going ‘go on and do something’ and he is just guaranteed to give it away. He is going into bodies, he’s not getting his head. You say about his career, my goodness, he’s had some great moves and gone for a lot of money.

“But watching him out there, take him off, guarantee you’ll score in the second half now.”

Tell us how you really feel, Roy…

"He's the biggest disappointment ever to come to Manchester United!" 👀@GNev2 and Roy Keane have something to say about Angel Di Maria… 😬

As Joe Cole recalled Sven-Goran Eriksson’s decision to send Phil Neville on instead of himself during England’s defeat to Portugal in 2004, Keane’s pithy one-liner cut right to the heart of the matter.