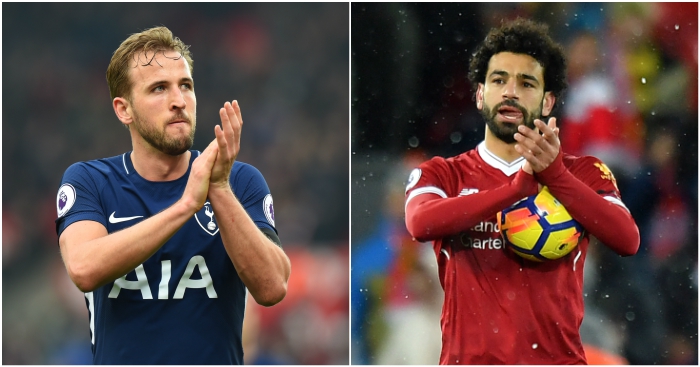 Tottenham forward Harry Kane remains hopeful that he can catch Liverpool star Mohamed Salah in the race for the Premier League’s Golden Boot.

Kane, who has been denied a goal in his return from injury against Stoke by the dubious goals panel, remains determined despite being five goals behind Salah.

“I swear on my daughter’s life that I touched the ball,” Kane said after the winner at Stoke was retrospectively awarded to Christian Eriksen.

“Obviously as a striker, it would be great to win the Golden Boot again. I will keep working hard from now until the end of the season. I still believe I can. There are still games to go.”

We’ve taken a look at all the contributing factors to see whether it may be possible that Kane could snatch the trophy from Salah’s grasp.

Obviously both attackers have been in scintillating form throughout the campaign, though Kane’s 106.2 minutes per goal is bettered by Salah, who has actually played less minutes than the Englishman in the Premier League this term.

Jurgen Klopp’s £37million summer signing is scoring at a rate of a goal every 85.7 minutes.

Salah is also in exceptional form at the moment. You could keep going back and back to count how many he had scored in a certain number of fixtures, but in his last three Liverpool appearances the Egypt international has hit six goals.

Kane, meanwhile, hasn’t found the back of the net in his last three full matches for Spurs, having not scored since a victory at Crystal Palace on February 25.

Prior to that, he had managed just three in four Premier League matches.

Mohamed Salah for Liverpool this season:

Tottenham have a game in hand over Liverpool, which could help Kane’s cause, especially with Jurgen Klopp’s focus on the Champions League.

Salah was completely left out of the Merseyside derby on Saturday after picking up a slight injury in the Reds’ Champions League win over Manchester City.

Liverpool may have to squeeze in one fixture more than Tottenham before the end of the Premier League season, presuming they reach the Champions League semi-finals, with Spurs competing in the FA Cup semi-finals.

Klopp’s rotation policy could mean Salah is preferred for the Champions League and rested in the domestic games.

Salah injured for Liverpool and Harry Kane back for Tottenham…

The race for golden boot is getting more and more interesting

Both sides face West Brom and Brighton in their remaining fixtures, though neither player managed a goal in their meeting with Chris Hughton’s side earlier this season.

Kane scored just two goals against all six of his side’s remaining opponents in the return fixtures, while Salah netted four times against his five forthcoming opponents.

Liverpool’s comparably easier end to the season is highlighted by the fact they line up against the bottom two, with their last five opponents averaging a league position of 13.6th. Spurs’ remaining opposition average 10.7th in the Premier League.

It looks like a tall order for Kane to even score the five goals he needs to catch up with Salah, never mind scoring five more than the Egyptian in the short remainder of the season.

“I’ve got to focus on my game. I can’t control what he does,” Kane said.

“The ankle feels fine. It happened similar last year and I came back strong and that’s what I’m aiming to do this summer and take that into the World Cup.”

In fact, Kane scored seven goals in the last two games of last season – and nine across the last six – so anything remains possible.