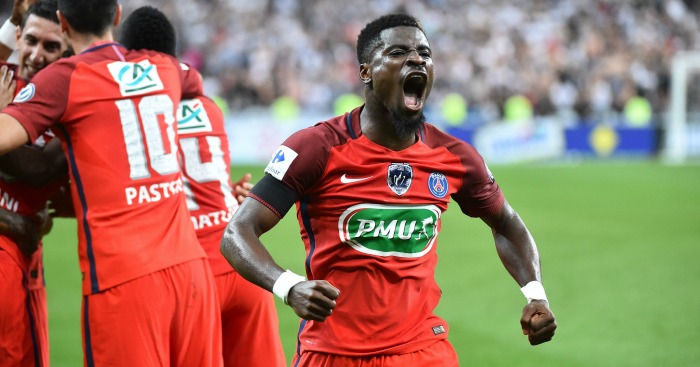 Tottenham have completed their traditional deadline day signing by landing Serge Aurier in a £23million move from PSG.

Aurier’s deal has been in the pipeline for a while but was finally completed after the 24-year-old was granted a work permit following delays caused by a criminal conviction in France.

“This is a huge and exciting opportunity at a massive football club and I am determined to prove myself as a professional both on and off the pitch,” he told the club’s official website.

The Ivory Coast right-back has been signed as a replacement for Kyle Walker and will compete with Kieran Trippier for a place in Mauricio Pochettino’s starting XI.

Despite all three players being regarded for their attacking capabilities, none of the trio scored a league goal last term, though Aurier lags behind in terms of assists, recording three in comparison to Walker and Trippier’s five.

Trippier’s record in this instance, however, is much more impressive having played much less league football than his competitors last term. The former Burnley man registered an assist ever 113.2 minutes, making him significantly more prolific in that regard than Aurier (610) and Walker (540.8).

As we often point out, however, assist statistics can be misleading. A player could be creating plenty of chances only for his team-mates to allow them to go to waste, and Aurier’s numbers in terms of chances created per game match up much better.

The Ivorian creates on average 1.1 chances per game, while Walker and Trippier both average 1.2.

With the trio known for their threat down the right flank, Aurier’s dribble completion of 62.5% beats that of Walker (55%) but falls short of Trippier’s 66.6%.

Aurier does come out on top with regards to pass completion, however. Last term in Ligue 1 he completed 89% of his passes in comparison to the 79.8% and 76.3% of Walker and Trippier, respectively.

With Tottenham’s defence renowned as one of the best in the league, Aurier will have to maintain the high standards set over the last two seasons as Spurs have challenged for the title.

The former PSG averaged 1.5 interceptions per game last term, beating Walker’s 1.2 and Trippier’s 0.6, while his tackle success rate ranks in between the England duo.

Mauricio Pochettino will be encouraged by the new boy’s ability in the air, with Aurier winning 67.5% of his aerial duels, closely followed by Walker’s 66.6% success rate and Trippier’s lowly 37.5%.