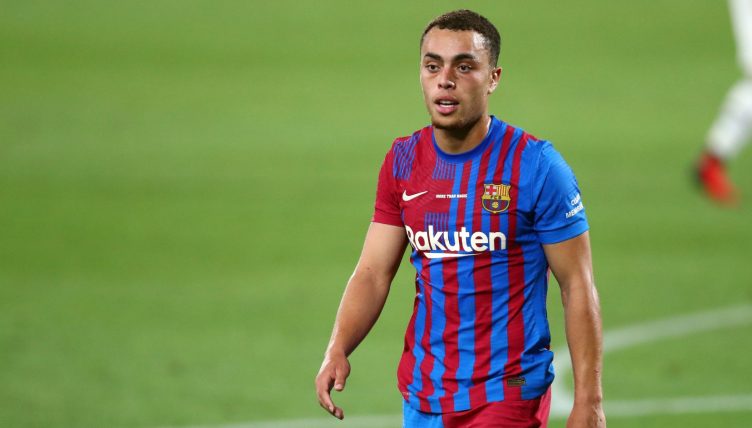 Manchester United are reportedly trying to sign Barcelona’s Sergino Dest – but will he improve Erik ten Hag’s squad? We’ve had a look at his stats to find out.

Dest came through Ajax’s academy and briefly played under Ten Hag before moving to Barcelona in the summer of 2020. He’s since made 72 appearances for the Spanish side but has fallen out of favour under Xavi.

According to the Manchester Evening News, United have held exploratory talks with Barcelona about signing the right-back on a season-long loan.

We’ve compared his La Liga stats from 2021-22 to the corresponding Premier League stats for United’s Diogo Dalot and Aaron Wan-Bissaka.

Dest didn’t get on the scoresheet in La Liga in 2021-22 but registered three assists, averaging a direct goal contribution every 505.3 minutes.

In comparison, Dalot didn’t register a goal or assist across 1,799 league minutes last season. Wan-Bissaka also failed to produce a direct goal contribution during his 1,794 minutes on the pitch.

While Dest didn’t score for Barcelona in 2021-22, he still had a few attempts on goal and averaged 0.7 shots per 90 minutes.

Dalot also averaged 0.7 shots per 90 minutes but Wan-Bissaka was far more hesitant in front of goal, averaging just 0.3 shots per 90.

The Barcelona right-back leads the way when it comes to dribbling, completing 2.2 successful dribbles per 90 minutes at a success rate of 56.4%.

Wan-Bissaka follows closely behind with 1.8 successful dribbles per 90 minutes at a completion rate of 58.06%. Dalot then finds himself at the bottom of the pile with 0.9 per 90, but he does have the best success rate (69.2%).

Sergino Dest can be the back up to Dalot and he’s worked under Ten Hag before pic.twitter.com/3nxtEQff2v

Having completed 92.4% of his attempted passes in La Liga, the USA international is also the clear winner when it comes to passing accuracy. Wan-Bissaka is second in this respect as his pass success rate of 81% was marginally higher than Dalot’s 80.2%.

But Dalot is ahead of the other two when it comes to crossing, averaging 0.6 per 90 minutes. In comparison, Wan-Bissaka registered 0.4 and Dest averaged 0.3.

While modern full-backs are expected to support the attacking players, managers will still want them to contribute defensively.

Dest made 1.2 successful tackles per 90 minutes last season but Dalot (2.8) and Wan-Bissaka (2.5) both posted much higher averages.

In terms of interceptions, Wan-Bissaka leads the way with 1.7 per 90 minutes. He is closely followed by Dalot (1.5) while Dest is a distant third (0.1).