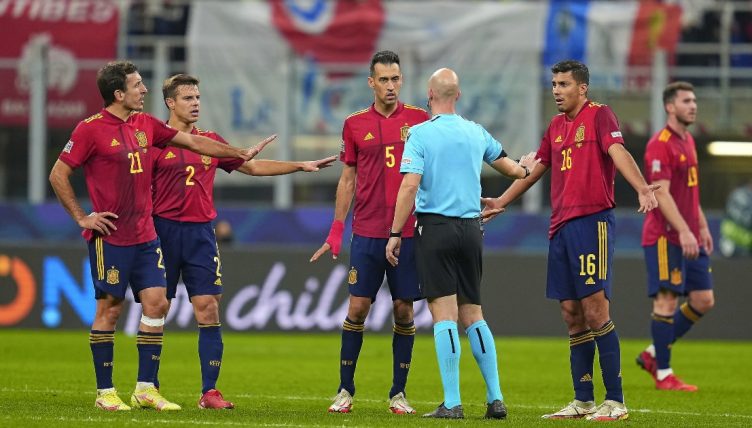 The last World Cup took place without Italy, the Netherlands and the United States and next year’s tournament may also be marked by some high-profile absentees.

International football is getting tougher as the smaller nations improve and make competition for World Cup spaces more difficult. While nations such as Belgium, Brazil and England are cantering towards qualification, other big names haven’t found it so easy.

We’ve investigated the state of play across the world and identified seven World Cup staples that are in danger of missing out on Qatar 2022.

As we’ve seen in the Euros and the Nations League, Spain are very impressive on their day – but are currently facing a challenging path to World Cup qualification.

Having dropped points against Greece and Sweden – the latter their first World Cup qualifying defeat since 1993 – Spain find themselves on the back foot in Group B.

The Swedes lead the group by two points, meaning they could afford to draw the return match against Spain in November and still reach Qatar with a victory in Georgia.

If that transpires, Spain may be forced down the play-off route. As it stands, the seedings will be based entirely on World Cup qualifying results meaning Spain could conceivably face Croatia in a re-match of their Euro 2020 epic.

The Spanish have reached every World Cup since 1978 but, with a propensity for shot-shy performances and numerous banana skins in their way, next year’s tournament may yet take place without the 2010 winners.

Portugal are locked in a two-way battle with Serbia for one automatic ticket to Qatar – and the two will play each other in Lisbon in November.

Before then, Portugal will face an Ireland team that was out of contention months ago.

You’d expect Cristiano Ronaldo, Bruno Fernandes and co to roll the Irish over but they were reliant on two late Ronaldo goals to win their previous encounter in September and Stephen Kenny’s side are improving.

And, while Serbia do have a tendency to shoot themselves in the foot, their squad contains talented individuals like Dusan Tadic, Sergei Milkenovic-Savic and Dusan Vlahovic.

You’d still favour Portugal to reach the finals next month, but they’re often less than their sum of parts and they should take neither of their remaining opponents for granted.

Chile were boss during the 2010s, winning two Copas America and capturing the imagination at South Africa 2010 and Brazil 2014 with their attacking football.

But that generation of stars hasn’t been adequately replaced. Stars like Claudio Bravo, Arturo Vidal and Alexis Sanchez remain starters and Chile are a team crying out for fresh blood.

Having missed out in 2018, where they could conceivably have matched Croatia’s exploits and reached the final, Chile are currently eighth in qualifying and it’d be a surprise if this ageing side makes the finals next year – despite the best efforts of Ben Brereton Diaz.

Born in Stoke-on-Trent, made in Santiago (via Ewood Park).

Croatia were runners-up at the last World Cup but their side has changed considerably since then.

Six of the players that started the 2018 final against France – including Dejan Lovren, Ivan Rakitic and Mario Mandzukic – were not in their latest squad and dropped points against Slovakia now means that they must beat Russia next month to win their group.

While Croatia remain tough opponents for any side, especially with Luka Modric still around, they are undoubtedly weaker than four years ago and could find themselves edged out by a younger side in the play-offs.

South American qualifying is notoriously difficult – every team plays against each other home and away with barely an easy match among them. Even continental minnows like Bolivia can be a tough nut to crack up in the high altitude of La Paz.

And Uruguay have endured a terrible October that leaves their qualification chances looking a lot shakier. A stalemate with Colombia was as good as it got and they were thumped by both Argentina and Brazil.

Luis Suarez and Edinson Cavani aren’t getting any younger and Uruguay face a host of teams just below them – Chile, Paraguay and Peru among them – before qualification finishes in March 2022.

They should have enough quality to pull through but this isn’t the strong Uruguayan side of the 2010s.

Japan are always there aren’t they? The Samurai Blue have participated in every finals since 1998 and their inventive style of play makes a refreshing change from a succession of over-exposed European plodders.

But one of Asian football’s heavyweights have underwhelmed in qualification so far, losing to both Oman and Saudi Arabia while only just scraping past China.

With the top two progressing from a group of six, Japan are currently 4th in their group and face the prospect of usurping either Australia or Saudi Arabia for an automatic place in Qatar.

Not impossible, seeing as they’ve just beaten Australia. But Japan have given themselves much work to do if they’re to reach their seventh consecutive World Cup.

Africa’s qualification process is brutal. Ten groups of four teams play home and away, with the winners facing off in a two-legged play-off to determine the continent’s five World Cup representatives.

The cut-throat nature of qualifying has left some of Africa’s big-hitters staring at the abyss already. Cameroon have lost ground to the Ivory Coast, while Nigeria fell to a shock defeat against the Central African Republic.

Ghana entered the process brimming with confidence but a 1-0 loss in South Africa has left them in jeopardy.

They’ve reappointed Milovan Rajevac, the manager who led them to the 2010 World Cup quarter-finals, and two wins this month has kept them in contention.

A squad featuring Thomas Partey and the Ayew brothers needs to beat South Africa next month and failure to reach the play-offs at a minimum would be regarded as a huge failure.

13 players who performed better for country than club: Heskey, Podolski…