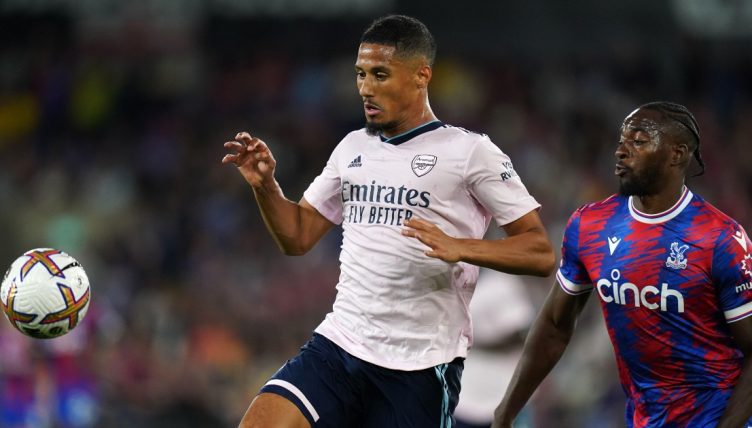 William Saliba finally made his long-anticipated Arsenal debut in their Premer League opener against Crystal Palace and he didn’t disappoint.

Saliba joined the Gunners from Saint Etienne for a reported £27million in 2019 before being immediately loaned back to the Ligue 1 outfit for the 2019-20 season.

He arrived in north London in the summer of 2020 but didn’t get a chance under Mikel Arteta, who left him out of their Premier League and Europa League squads.

The centre-back had a promising loan spell at Nice in the second half of 2020-21 and produced some brilliant performances for Marseille in 2021-22, winning the Ligue 1 Young Player of the Year award.

Saliba was then deemed ready for Premier League football and started alongside Gabriel for their trip to Crystal Palace on the opening day of the 2022-23 Premier League season.

Gabriel Martinelli’s header and a Marc Guehi own goal gave Arsenal a 2-0 win but Saliba deservedly won the Man of the Match award.

“I think the most important thing for young players is just to play,” former Manchester United defender Gary Neville told Sky Sports after the game. “He’s got football inside him, I was massively impressed by him. He reminded me of a young Rio Ferdinand.

“Crystal Palace away is a tough away game in the Premier League. They come at you. That’s a big night for him.”

We’ve rounded up seven of the best stats from the centre-back’s impressive display at Selhurst Park.

– He had a 100% success rate for both aerial duels and take-ons during his 90 minutes against Palace.

– The centre-back helped win possession back for his side seven times and didn’t commit a single foul.

– Saliba has already helped Arsenal keep more clean sheets in August 2022 than they managed in the entirety of August 2021.

– Palace have a lot of skilful players like Wilfried Zaha and Eberechi Eze but Saliba wasn’t dribbled past at Selhurst Park.

– The France international showcased his ability on the ball, attempting 48 passes and recording a 93.8% passing accuracy. He also had a 60% success rate with long balls and made six passes into the final third.

– Saliba channelled his inner Ferdinand by successfully attempting one dribble on his Premier League debut.