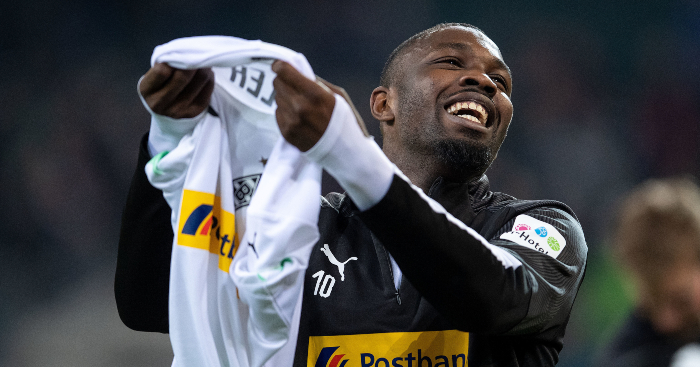 After a prolonged absence, the Bundesliga returns this weekend, albeit behind closed doors.

The star names of Robert Lewandowski, Jadon Sancho and Timo Werner have been well documented over the last few years.

But, as we’re all set to become Bundesliga fans for the foreseeable future, we’ve taken a look at some of the biggest talents outside of Germany’s top three clubs – Bayern Munich, Borussia Dortmund and RB Leipzig.

The 20-year-old Parisian moved from his boyhood club to Bayer Leverkusen last summer for a reported £13.5million pound fee in order to establish a name for himself and so far, the gamble has paid off.

Competing with Leon Bailey for minutes on his favoured left wing has seen his game time slightly limited but four goals and three assists in 19 Bundesliga appearances has ensured the pacey wide man has caught the eye.

Still just 21, McKennie is already an established USA international, with 19 caps to his name. The Schalke midfielder is often compared to Barcelona’s Arturo Vidal, thanks to his physical presence and all-round game.

Comfortable playing as a deep-lying midfielder or in a box-to-box role, McKennie is part of a new wave of American talent, fronted by Christian Pulisic, that has the potential to become a real force.

“He’s an outstanding talent,” said Schalke boss David Wagner. “In the No.6 or No.8 position he has the mentality, a real working mentality that you need. And he’s brave on the ball as well. He can be one of the best midfielders in the Bundesliga.”

“I think this year is better for me and understanding where my role is.”

Schalke’s Weston McKennie on @FOXSoccer talking about his position and David Wagner’s style of play being “more fun” than last season. pic.twitter.com/AMN3Ris0nK

The Hertha Berlin starlet may have only made six appearances so far this campaign due to a long-term knee injury, but the 21-year-old is already into his third season in senior football.

Maier expressed his desire to leave his hometown club in January after Hertha used their newfound wealth to complete deals for Santiago Ascacibar and Lucas Tousart, but he ultimately stayed put.

Comparisons have been drawn to compatriot Toni Kroos thanks to his composure and control in the middle of the park, and he appears set to feature heavily under new head coach Bruno Labbadia.

Labbadia told Kicker in April: “Of course, I’m aware of the difficulties he has had, but I can see now that he’s totally motivated. The way we want to play will make it possible for him to bring out his strengths.”

The diminutive Croatian has already amassed 11 international caps and has established himself as a key player for Wolfsburg this season.

The 21-year-old has moved from his usual left wing role to a more central position and is reaping the rewards of his manager’s tactical switch.

Son of French World Cup winner Lilian Thuram, Marcus is certainly making a name for himself in Germany.

The 22-year-old swapped Guingamp for Borussia Monchengladbach last summer for a reported £8.5million fee and has hit the ground running.

His six goals and eight assists in 25 Bundesliga matches helped Gladbach to the top of the table early on, but as the striker’s form wavered slightly, so did his club’s.

Marcus Thuram's stats per 90 in his first Bundesliga-season. CF (left) and winger (right). A smart, well-rounded forward. Possesses technique, 1v1 + pace for a winger, the strength, size + anticipation for a target man, and the pace + movement of a deep-running CF. Very exciting. pic.twitter.com/itkaim3n7k

Eintracht Frankfurt appear to have a real player on their hands in the shape of 6ft 4in N’Dicka. Part of a growing French contingent plying their trade in the Bundesliga, the former Auxerre defender is comfortable at centre-half and left-back.

The 20-year-old only missed seven league games in his debut campaign last year and was nominated for rookie of the season as the Eagles finished seventh and made it to the Europa League semi-finals.

If you’ve played a recent edition of Football Manager, you probably already know about Palacios, who has started to make an impression in real life.

The 21-year-old Argentine won the Copa Libertadores in 2018 with River Plate and has already earned four caps for his national side.

Following in an illustrious line of South Americans to make the switch to Bayer Leverkusen, the central midfielder has made just three appearances for his new side following a January switch and will be eager to impress upon the league’s resumption.

Bayer Leverkusen are brilliant to watch – and might finally win something