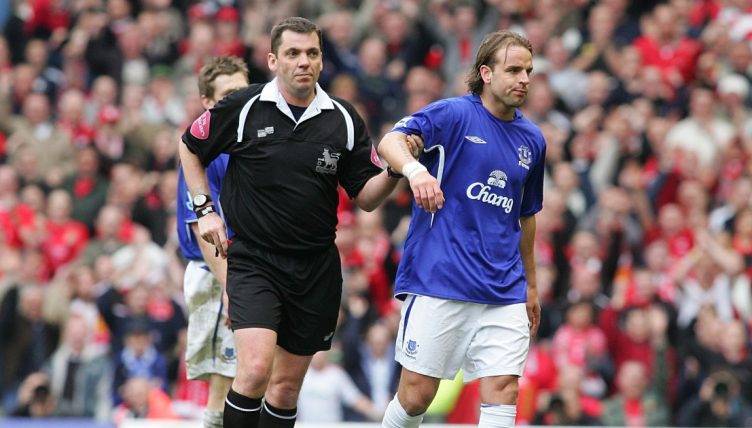 Everton are part of the Premier League furniture, having participated in every season and contributing some fine moments to the competition’s tapestry.

Their desire to break into the upper echelons of the league has led to the arrival of some expensive players down the years, but not all of them have lived up to the billing.

Here are seven names that arrived on Merseyside with big reputations that they never came close to fulfilling.

If you’ll allow us to paraphrase Brian Clough, Van der Meyde wasn’t the biggest Everton flop but he’s in the top one.

Signed for a bargain £2million in 2005, the only impact the Netherlands international made in his first season was getting sent off in the Merseyside derby. Things wouldn’t improve.

During his four years at Goodison, he *takes breath* fully embraced the Liverpool club scene, fell in love with a stripper, was dumped by his wife after she uncovered an affair using a private investigator, had his dog stolen in a ransom plot and developed a serious addiction to alcohol and sleeping pills.

The winger played just 20 times for a distinctly unimpressed David Moyes and continued on a downward spiral for a further year.

It was only the arrangement of a training deal with former club Ajax that saved Van der Meyde from total destruction that he details in his gripping autobiography No Mercy.

A total waste of a promising career.

ON THIS DAY In 2006 : Steven Gerrard and Andy van der Meyde were sent off in an Merseyside derby. #EFC #Everton #LFC #Liverpool #OTD pic.twitter.com/BmX7oqWn4P

Signed during the summer of 2017 where Ronald Koeman had a fetish for mid-paced number 10s, big things were expected of Klaassen.

He turned out to be another Dutch flop. Klaassen never settled in England and found his opportunities limited once Koeman had been replaced by David Unsworth, then Sam Allardyce. He appeared 16 times without scoring.

In an interview with EFL Voetbal following his move to Werder Bremen in 2018, Klaassen said: “I noticed quite quickly that it would be difficult at Everton, even before Ronald Koeman was fired.

“Before I signed, I expected that there would be a little more football in the team, although I also knew that English football is a lot of running and pounding.

“I was used to the game at Ajax: always the ball on the floor. In England, I sometimes had the idea that the balls always flew over me. We did not have a striker who could hold a ball and move around it or get over it.”

Kroldrup was a classy defender who starred for Udinese and the Denmark national team during the early 2000s. Even at £5million, Everton looked to have secured a coup in the summer following Champions League qualification.

Things quickly went wrong. Kroldrup suffered a groin injury before kicking a ball for his new club and required surgery. By the time he made his debut on Boxing Day 2005, Everton had been knocked out of Europe and were struggling against relegation. They lost 4-0 to Aston Villa.

It’d be his only league appearance in England and his transfer has gone down as one of the worst in Everton’s history.

Everton have form for signing Manchester United cast-offs but Scheiderlin was no Phil Neville or Tim Howard.

He’d already flopped at Old Trafford before Koeman decided to splurge £24 million on the midfielder in January 2017. In fairness, Schneiderlin enjoyed a good half-season as Everton won the ‘Everton Cup’ but things went south soon after.

The one-time France international saw his form in 2017-18 deteriorate alongside other Everton players, getting sent-off during a Europa League spanking in Lyon and suffering the indignity of interest from West Ham.

He played a bit-part role in the following two seasons before joined Nice last summer.

It’s hard to remember Wright as anything other than a perennial bench-warmer, but he was once considered a future England goalkeeper.

His reputation was certainly high when Everton paid Arsenal £3.5million for Wright’s services in 2002. They may have been rethinking that when the shot-stopper gifted Tottenahm’s Les Ferdinand a goal on his debut.

Injuries began to mount. Wright hurt his shoulder falling from his loft in June 2003 and missed almost the entirety of the 2003-04 season after undergoing knee surgery.

His time at Everton can be summed up by one incident in 2006. After finally getting a run of games, Wright ignored a large sign that instructed players to use temporary goals for their warm-up before a match at Chelsea.

He ignored the warning and fell on the sign, injuring his ankle and acting as the final straw for Moyes.

Wright was released the following summer.

“The evening didn’t start well for Everton, keeper Richard Wright injuring his ankle in a freak accident during the warm-up.”

A Big Sam signing for a big fee has been a big flop on Merseyside.

Desperately needing a striker, Allardyce spent a reported £27 million on the Turkey international and was forced to defend Tosun when his early performances were criticised by the Goodison faithful.

He did help Everton recover from a shocking start to finish eighth in 2017-18 but the target man soon found himself usurped by Dominic Calvert-Lewin and opportunities became scarce. Eleven goals in 58 appearances simply isn’t good enough.

Loans at Crystal Palace and Besiktas have provided temporary release from his Everton purgatory, but Tosun will be remembered as the epitome of a panic buy.

Thousands of players have played in the Premier League but only one has quit mid-match.

During a 4-1 surrender against Arsenal in 2001, one Everton fan ran onto the pitch and offered to swap shirts with Nyarko who had infuriated many with his listless performances.

Bought to the club for £4.5million, Nyarko requested to be substituted and transferred – which manager Walter Smith declared was “a lack of strength.”

He somehow managed to stick around until 2004 but the player described by Gerard Houiller as an ‘outstanding ‘capture never lived up to the hype.