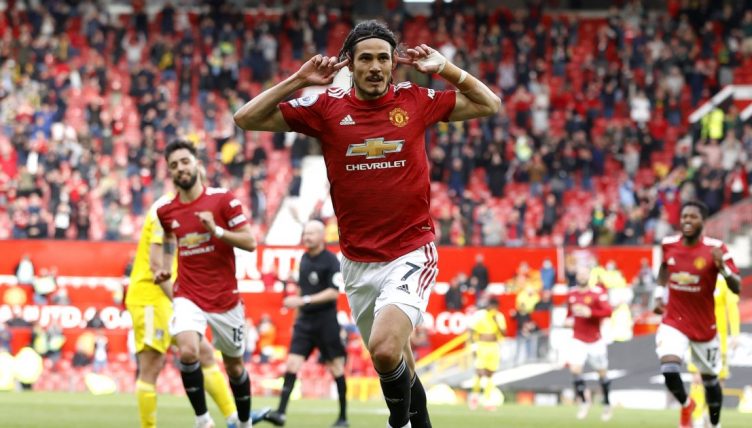 Edinson Cavani made the Manchester United fans’ much-anticipated return to Old Trafford worth the wait with a stunning goal in the Red Devils’ 1-1 draw with Fulham on Tuesday.

Eyebrows were raised in some quarters when United decided to sign the ageing striker on a free transfer last summer, but the deal has proven a masterstroke as Cavani has shown class is permanent with a series of exceptional performances.

After his best goal yet for the club, we’ve rounded up seven eye-catching stats (with some help from the excellent work of Twitter’s Statman Dave), both from the 34-year-old’s display against Fulham and from his season as a whole.

–  Cavani’s goal came from an xG rating of just 0.01. Quite literally a one in a hundred chance.

– Taking his Premier League tally to 10, Cavani has now scored as many goals in the competition for United as Diego Forlan, despite playing 37 games fewer than his fellow Uruguayan. He’s still not played topless, mind.

– While all the attention was understandably on his superb goal, Cavani completed more tackles than any other player on the pitch in the first half, winning all three of his attempted tackles. Indeed, no Manchester United player made more across the whole game.

– He has joined Marcus Rashford and Bruno Fernandes among United’s ranks of players to reach double figures in the Premier League this term, making the Red Devils the first team to have three players reach that milestone in 2020-21.

Just got home and seen the Cavani goal. 🔥🔥🙌pic.twitter.com/j1ItHi6umP

– Courtesy of that strike, this is Cavani’s 12th season in which he has reached double figures in a league campaign. He has also had five 20+ goal seasons and one 30+ goal season.

– He has now scored 16 goals in 38 appearances for United in all competitions this season. With 18 of those appearances coming from the bench, he averages a goal every 129.1 minutes and a goal or assist every 108.7 minutes.

– This was Cavani’s first goal in the Premier League from outside the area, highlighting the poacher’s instinct he has provided United throughout the rest of the campaign.