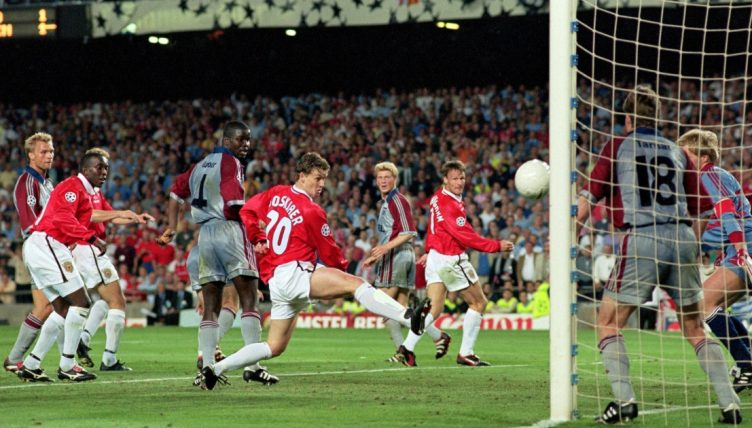 Nothing beats a last-minute goal and fans of Barcelona, Liverpool, Manchester United and Real Madrid among others have all experienced giddy highs in Europe because of them.

Cristiano Ronaldo marked his European second-coming at Old Trafford with a last-minute winner against Villarreal in September 2021, but that was simply a group game. Other last-minute strikes have decided trophies, defined careers and have contributed to the rich tapestry of European football.

There’s nothing new to say about ‘That Night in Barcelona’, so sit back and relieve two of the most famous goals in football history.

Solskjaer & Sheringham (United) vs Bayern —
We may as well start the thread with the most legendary substitution of all time. In the ‘99 Champions League final, United were down 1-0, prompting Sir Alex to bring on his two sub strikers. You know the rest. pic.twitter.com/iDhoRyacTK

A game still guaranteed to boil Chelsea’s fans blood, a first-half thunderbolt from Michael Essien looked destined to send Guus Hiddink’s side into a second successive final against Manchester United.

But, while Tom Henning Ovrebo was writing himself into Chelsea folklore, they failed to add a second goal and Barcelona stole an equaliser through Iniesta’s long-range effort.

They may have been the greatest club side of their generation but Barca got extremely lucky here.

But equally the rule has brought us some of the most exciting and memorable moments in the history of European club football.

From Iniesta breaking Chelsea hearts around the world:pic.twitter.com/cVmnZsvOa9

After coming through a classic quarter-final against Manchester City, Spurs found themselves 3-0 down against a cult Ajax side with just 45 minutes of the semi-final tie remaining.

With Harry Kane injured, there appeared to be little hope but Moura dramatically stepped up to the plate with two quick-fire goals.

Spurs thrashed about for a winner but looked destined to miss out on the final until Fernando Llorente headed a long ball on and Dele Alli flicked passed it to Moura, who whipped a 95th-minute winner into the net to complete the miracle.

Lucas Moura scored with 3 of his 4 shots from inside the box vs. Ajax.

One of the greatest games ever staged at Anfield was won by an unlikely goalscorer.

Liverpool had been 2-0 and 3-1 down against Borussia Dortmund in their 2016 Europa League quarter-final before goals from Phillipe Coutinho and Mamadou Sakho levelled the tie.

Jurgen Klopp’s current side battered his old one in vein until the much-maligned Dejan Lovren rose and gloriously heading home James Milner’s cross to bring the house down.

On this day in 2014 Liverpool signed Dejan Lovren from Southampton and, well, we’ll always have Dortmundpic.twitter.com/21GD2nfzcd

Tottenham fans still dine out on this and, given that Nayim spent five years at White Hart Lane, it’s not hard to figure out why.

Happy birthday to Nayim, breaker of Gooner hearts in the 120th minute of the ’95 Cup Winners’ Cup final when he hit a half-volley vaguely at the Arsenal goal. To Seaman's horror, it went right in.
pic.twitter.com/VS6so8TXnN

After leading for much of the game, Atleti were floored. Unable to rouse themselves for extra-time, they capitulated in the face of a Real onslaught.

But none of it would have been possible without Ramos’ intervention.

Maccarone underwhelmed at Middlesbrough. £8.5million was a lot of money in 2002 but the striker had two really disappointing seasons that were followed by loans at Parma and Siena.

But he was back for Boro’s fairytale run in the 2005-06 UEFA Cup and it was Maccarone that scored vital winners against Basel and Steaua Bucharest in the quarter-final and semi-final respectively.

He may not have lived up to expectations on Teeside but at least Maccarone is responsible for some of the greatest football commentary of all time.

It’s Massimo Maccarone’s Birthday, so here it is.

Some of the greatest commentary of all time.