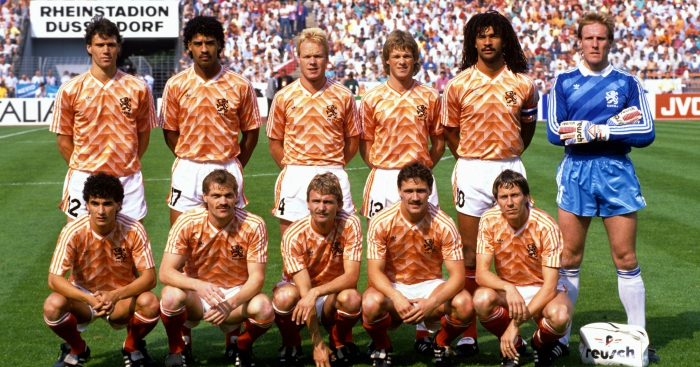 Several teams will be wearing updated versions of classic kits at the 2018 World Cup – and now we want to see more brought back.

Germany’s two-tone homage to their Italia 90 garb works wonderfully, while Spain’s twist on their 1994 outfit is another hit. Kit manufacturers take note: this is what we want.

There are plenty of other iconic kits that would still work today with touch-up here and there, starting with these seven… 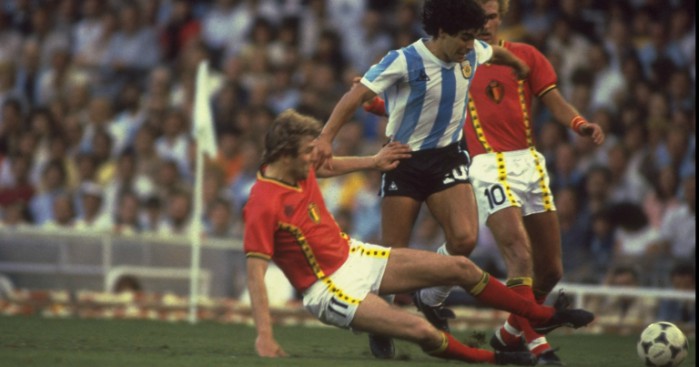 The Red Devils have been lucky enough to get a retro release in time for Russia next year, with the latest jersey a homage to the 1984 edition that would look more familiar on a golf course but equally as cool on the football pitch.

But we wish they could go back a couple of years further to 1982, when the Belgians sported what appeared to be braces on their Admiral jerseys. Wonderfully, the piping down either side ran down the front of their shorts too. This, on Marouane Fellaini, would be a sight of rare beauty.

It was too cool even for Diego Maradona, who could only stand and admire as his Argentina side were beaten 1-0 at the Nou Camp in their opening match.

It wasn’t an original design, however. Belgium’s was a modified template of Coventry’s famous chocolate brown kit, while Wales also wore something very similar. 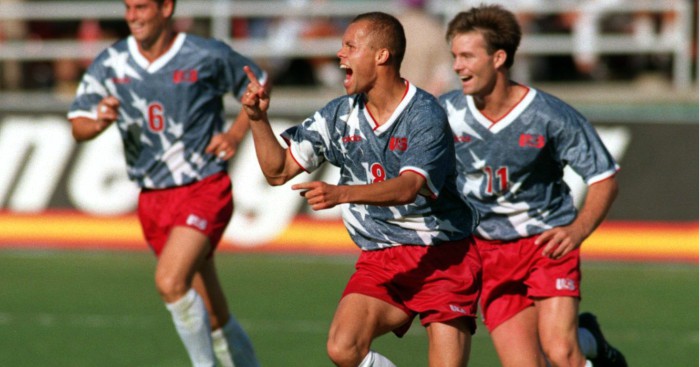 “We were like the cowboys of the world,” remembers Tab Ramos. “Here we were, wearing jeans.”

The United States were desperate to make a big impression during the 1994 World Cup on home soil, and Adidas certainly helped the team achieve that. Not that the players were grateful.

“At first, a lot of us thought the jersey was a joke or a prank,” he recalled to ESPN. “When it dawned on us that was not the case, I was like, ‘Oh crap!’ We were already under incredible pressure not to be a laughing stock and someone had thought it was a good idea for us to take the field in faux denim.”

A couple of years before Umbro were heavily influenced by denim with their grey designs for England and Manchester United, the United States were given a home kit with what appeared to be jean shorts, while their away jersey was a stonewash print with stars stretched diagonally across it.

It was the stars rather than the stripes that the hosts wore for all three group games, which culminated in a 2-1 win over Colombia and qualification for the second round. “As soon as we beat Colombia, it was, ‘These jerseys are cool,’” Paul Caligiuri told Slate. 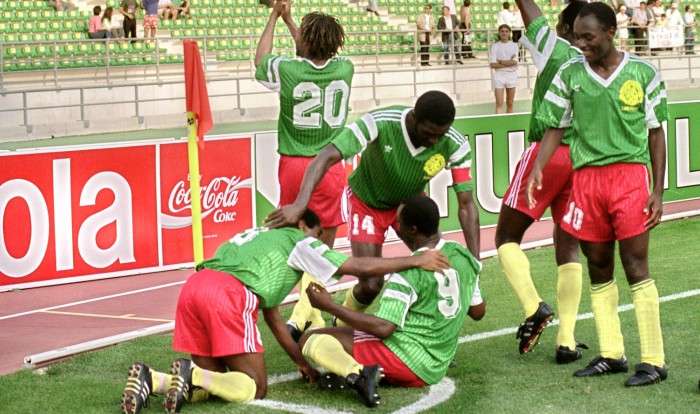 It may have appeared a dated look even then, perhaps because of the mish-mash of green, red, white and yellow, but Cameroon most certainly pulled it off.

Even if it weren’t for Roger Milla’s heroics, many would still remember the Indomitable Lions in this outfit. Perhaps it was the massive felt lion printed on the chest, or the fact that the shirts appeared too big even for some of Cameroon’s giants.

But, once again, it was the outfit which saw Maradona’s Argentina, the reigning champions, suffer another shock 1-0 defeat in the opening game of Italia 90.

They had a yellow version of the same template for an alternate kit, but it wasn’t even close to being as cool, and the 4-0 thumping they received from the Soviet Union reflected that.

Cameroon have experimented over recent years, even with a sleeveless kit, but we would love to see the Milla look reinvented. 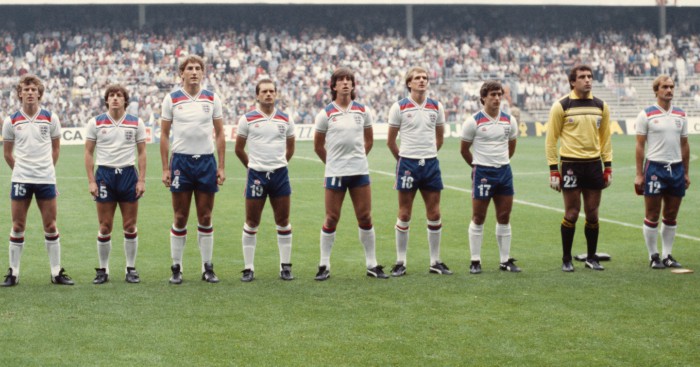 Many of us look back at England’s 1990 World Cup with great fondness, and the third kit, which evokes memories of New Order and World In Motion, was an absolute classic. But the print was so unique, it would be sartorial suicide to try and recreate it. It’s best left where it was as it was.

However, there is plenty in the home kit from the 1982 World Cup that any designer could work with.

Admiral’s creative minds were the first to be allowed almost free reign on the England jersey, which prior to them paying to take on the privilege in 1974, had just been a plain white shirt.

After red and blue piping was first added down the sleeves, in 1980, traditionalists were shocked to discover that the primary colours had taken over the shoulders too.

The away kit was a similar template in red, which looked equally as cool. Bring them back, Nike. And do away with the gopping red socks while you’re at it. 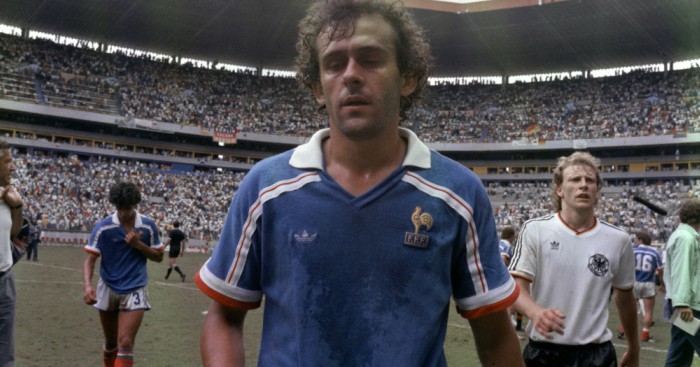 Les Bleus have certainly never looked cooler than 1984, when Michel Platini lifted the European Championship trophy with a blue jersey with a thick red band and three smaller white stripes across the middle of it. That look has already been recreated, though, when Zinedine Zidane held aloft the World Cup in a jersey hailing back to the glory days of 14 years prior.

But France followed up that beauty with another classic for Mexico 86. Another look made instantly cool by Platini, Jean Tigana and co, this jersey moved the piping higher so that extended across the front of both sleeves, though separate from the famous three stripes in alternate colours.

The Tricolour has always been a prominent theme on France’s jersey until Nike got hold of it. In recent years, they have gone for a crisper dark blue that looks the part, but we prefer the busier red, white and royal blue. 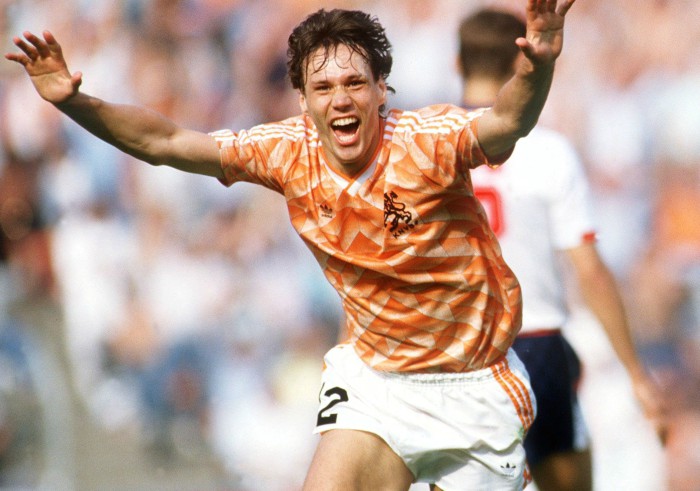 The reason a kit is remembered is often because of what was achieved in it. No one can see Holland’s 1988 design without immediately harking back to Marco van Basten’s volley thundering over the head of Russia keeper Rinat Dasayev in the European Championships final.

That success is why this template is recalled so much more easily that the red Russia version, or the mint green Germany away, despite the fact that both those jerseys had a longer life span than this Dutch edition, which was used only for the Euro 88 finals.

In the warm-up friendlies before the tournament, Holland were in their traditional block colour jerseys, which were immediately reintroduced for the World Cup qualifying campaign ahead of Italia 90.

It was worn only five times, which is all the more reason to bring it back. 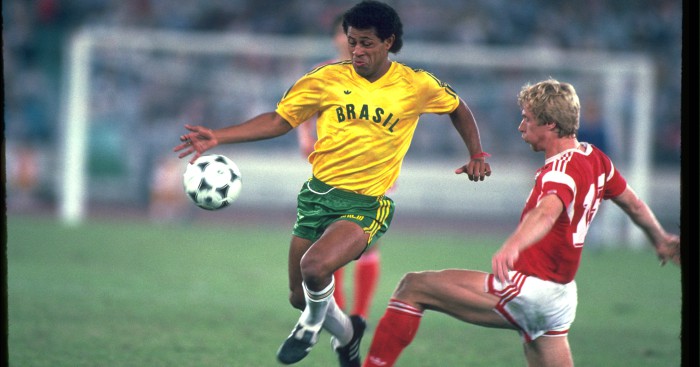 Brazil won their fourth World Cup in 1994 in Umbro, but it wasn’t a very ‘Brazil’ outfit. Prior to that, the Selecao were immaculately turned out in plain yellow jerseys, with green trim on the collar and sleeves.

That classic look was a constant theme for 40 years up until the World Cup of Romario and co. It would be wonderful to see Neymar and Coutinho kitted out in Russia in something like the Topper kits of the 1980s and Italia 90. But imagine Adidas outfitting Brazil, like they did during the 1988 Olympics.

With the CBF logo off limits, to identify themselves, they had ‘BRASIL’ arked across their chests, which wasn’t exactly unheard of. Brazil’s goalkeepers had been taking to the field in similarly-branded jerseys for years.

The coolest football shirts of the 1990s: My definitive top 10