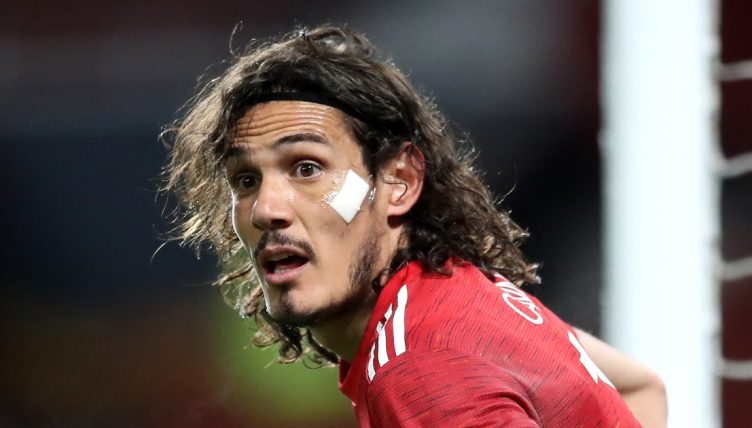 Eyebrows were raised in some quarters when Manchester United signed Edinson Cavani last summer, but the striker has proved a resounding success at Old Trafford to date.

Despite turning 34 in February, Cavani has proven invaluable to Ole Gunnar Solskjaer, averaging a goal or assist every 110 minutes in all competitions.

The impact veteran former PSG man has seen him earn instant respect from his peers, and we’ve rounded up some of the best quotes from his impressed team-mates.

After Cavani scored in United’s 3-1 win over Tottenham in April, Maguire told the club’s official website: “That’s what he’s done throughout his career, that movement in the box is the best that I’ve seen and the best that I’ve played against.

“That’s why he’s scored so many goals throughout his career and I think the rest of the lads have lots to learn from. He deserved that goal.”

Pogba touched upon the theme of learning from Cavani in January. When asked what the Uruguayan brings to the squad, Pogba replied: “Experience.”

He added: “He’s good for the young players to see that, to see the guy here who’s done so much and he works so hard.

“He gives this positive energy, the mindset of hard work and the experience, its been great to have him.

“Everyone is learning from him, from the oldest guy to the youngest.”

As a young goalscorer, Greenwood is certainly one of the players United will hope to benefit from watching Cavani at close quarters. Even Cavani’s fashion choices have caught the 19-year-old’s eye.

“He’s a top striker, you can tell the second he came here,” Greenwood told United’s official website in January. “The stuff he does, the way he dresses himself, the way he trains, the way he does everything right as a footballer, really.

“He reminds me a lot of Juan [Mata] who’s here as well, and Nemanja [Matic] – two great professional players. It’s always good to have them in your team, as a young lad, to look up to.”

Like Greenwood, Rashford welcomed the added competition from someone of Cavani’s class, telling the club’s official website in December: “He’s a top player, he has lots of qualities and I think he gives us another dimension that’s different to what we already have in the team.

“It’s good to play with him and to see him scoring and assisting is important for any forward and we need to keep up between us what we’ve been doing.”

In November, Cavani came off the bench at half-time with Manchester United trailing Southampton 2-0. The striker turned the game around, scoring twice himself and providing an assist for Fernandes as United claimed all three points.

An impressed Fernandes told club media: “When you have strikers who move a lot, and they give you the chance to play balls for them, it is really good.”

He added: “For me, he’s one of those strikers that can smell the goal as you saw twice. He smelt the goal, you need to have this feeling to score these two goals.

“As I said some weeks and some months ago, Edi will help us and he is helping already.”

De Gea is faced with the problem of trying to stop Cavani in training, and the goalkeeper summed up the forward’s attitude when speaking to the club’s official website in January, laughing: “He just wants to score goals! He’s a really experienced player who has scored many goals for many teams.

“I think everyone has seen his qualities, he always tries to score goals and is always in the box ready to jump on any mistake and take the ball and score.

“He’s a great header of the ball, he presses a lot [against the opposition]… he’s a great player for the team.”

As a fellow Spanish speaker, Mata helped Cavani to settle in England, crucially warning his new team-mate about Manchester’s micro-climate.

“Well, I’m very happy Edinson has come here because he is a very professional player, a very committed team-mate and very driven, during all his career,” Mata told United Review in November.

“Also, Edinson is very humble, of course, and he is a guy who likes the countryside. I think he’s settled now in his house in the countryside, which he is happy about.

“Of course, I told him that it is important to have a couple of umbrellas, not only one, in Manchester so I am sure he’s got a few! He is loving where he lives and his family is also happy.”