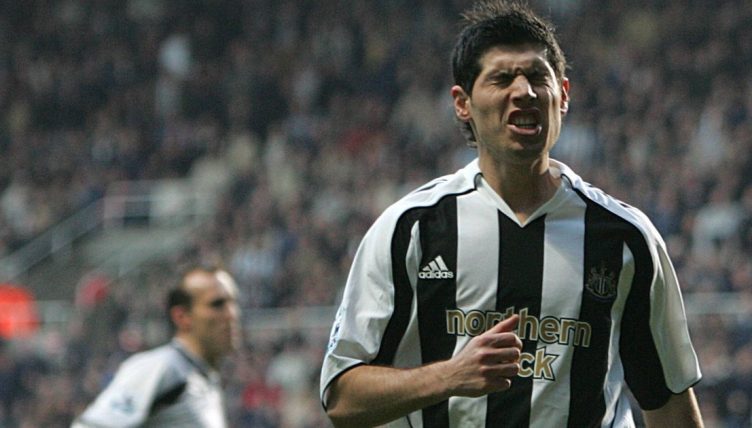 Newcastle are now ‘the richest club in the world’ and have been linked with countless big-money signings. But their record in the transfer market hasn’t always been brilliant to say the least.

Under previous owner Mike Ashley, the club were notoriously stingy. But even when Newcastle have splashed out – and especially when they splashed out more frequently before Ashley’s arrival – that spending has not always guaranteed success.

Plenty of players have turned up at St James’ Park hyped as the next big thing before failing to deliver, sometimes spectacularly. Here, we’ve rounded up seven of the biggest examples of Newcastle’s profligate spending and their fans’ thwarted dreams.

Cabella arrived slap bang in the middle of the Graham Carr-led Ligue 1 transfer trolley dash era, when Newcaslte seemingly said, ‘Oui, monsieur,’ to every agent whose player had looked in any way competent in the French top-flight.

Some of them, most notably Yohan Cabaye, Mathieu Debuchy and Hatem Ben Arfa, were rip-roaring successes. Then there was Remy Cabella.

Cabella emerged at Montpellier, helped them to the title in 2012 and in the season before Newcastle signed him from £8million in 2014, he’d bagged 14 goals in 41 games. Alan Pardew described him as a “special player” upon his arrival. Unfortunately, his form for Newcastle was as bad as his barnet.

“English football is not easy, it’s not for everyone,” he told Ligue 1 magazine in 2016. “I’d say you need some time to adapt. Every team is strong and that’s what makes the league so tough. Some players are cut out for it, others aren’t.”

Cabella wasn’t and after a single season and a single goal, he moved back to France with Marseille. Since 2019 he’s played for Russian top-flight side Krasnodar.

In 2000, £7million was a bloody fortune. A proper big wad of cash. And Newcastle saw fit to part with that wad in return for Carl Cort in the summer of that year.

He’d scored eight goals for the England Under-21s, he’d done well for Wimbledon and, most importantly, he’d scored a hat-trick against Sunderland in the Premier League at the back end of 1999. Young, English and prolific against the Mackems. What more could Newcastle want?

A lot more, as it turns out. Cort never got going in the North East, his progress halted by injury after injury. After 28 appearances in three seasons, he was sold to Wolves for £2million.

A year before Cristiano Ronaldo burst into the public consciousness with his performances for Sporting in 2002-03, there was another Portuguese wonderkid strutting his stuff at the Alvalade.

Hugo Viana had smashed England 3-1 with Portugal at the European Under-21 Championships in Switzerland. Calciomercato had elected him the best teenage footballer on the continent. Liverpool had shown serious interest and Celta Vigo had almost done a deal with Sporting to take him to Spain for €10million.

Then Freddy Shepherd landed in Lisbon on his private jet, waved €12.5million under the noses of Sporting president Jose Ribeiro Telles and young agent Jorge Mendes, and the previous deals were off.

Viana was getting on that plane as the most expensive 19-year-old in footballing history and going to Tyneside for his medical.

When they got back, Shepherd told the press: “The general consensus of opinion is that he’s the best young player in the world at the moment. He’s a left-sided midfielder, just the player Bobby Robson wants to spearhead our Champions League bid for next season.”

While Newcastle did make it into the Champions League, it was not thanks to the Portuguese whippersnapper. He scored just four goals in two seasons at St. James’ before being loaned back out to Sporting in 2004.

A disappointing spell at Valencia followed, before he finally settled at Braga, working his way back into the Portugal side for Euro 2012.

“I’m not sad about my career,” Viana told us in 2018. “It could be better, sure, but it could be worse. I never look back and think what could be. It doesn’t change anything; things happen without your control and it is important to adapt yourself to reality.”

Having not broken their transfer record for almost a decade and a half, Newcastle did so twice in the space of six months in 2019, signing Miguel Almiron for £21million and then smashing that mark by bringing in Joelinton, aka ‘Big Jow’, to lead Steve Bruce’s attack for £40million in the summer.

Joelinton neither led nor attacked under Bruce. You really did feel sorry for him sometimes – he was clearly not a natural frontman, and was certainly not one who was well suited to playing in Bruce’s agricultural style.

Who did that transfer record that Newcastle broke in 2019 belong to? Yep, little Mickey Owen. The man who celebrates scoring against children. The man who Newcastle fans will never, ever forgive.

He arrived for the princely sum £17million from Real Madrid in 2005 and was supposed to take the Magpies on to the next level. Instead, he spent most of his four seasons in the North East on the treatment table and was part of the squad that got relegated in 2009, reportedly refusing to play on the last day of that season so as not to risk injury.

If there’s ever been a louder swell of boos for a returning player than the one Owen got at St. James when he went back with Manchester United, then we’re yet to hear it.

In his autobiography, Owen wrote: “My move to Newcastle was one I really regret – I should have followed my gut instincts from the start.”

In the summer of 2004, Jean-Alain Boumsong was available as a free agent having seen his Auxerre contract expire. He was highly regarded, too. Naturally, Newcastle let him sign for Rangers in August before paying £8million for him five months later when the transfer window re-opened.

The sign of an expert transfer market operation, that.

The deal was later investigated as part of the Stevens report into corruption in football, but Newcastle boss Graeme Souness was cleared of any wrongdoing.

Odd transfer dealings aside, Boumsong could still have become a useful player on Tyneside. He endured a terrible debut against Yeading, but he looked the part physically and for a few weeks at the end of his first half-season in England he was actually quite good. As weird as this sounds now, he and Titus Bramble started to form a solid centre-back partnership.

That happy spell, though, was very, very temporary. In Boumsong’s first full campaign, it all went pear-shaped. Mistakes aplenty led to criticism from fans and the press. At the end of the season, Boumsong was off to Italy to spend a season with Juventus in Serie B.

If we are going solely on the gap between expectations and reality, then Albert Luque might top the lot here.

With them, Luque had finished consecutive seasons in the La Liga top three and reached the semi-finals of the Champions League in 2004.

He was a Spain striker and, at 27, should have been approaching the very peak of his footballing powers. But his hamstring went in his second game in England and things never really got better from there.

By the end of his spell at St James’, his transfer was also under investigation as part of the Stevens report and he was behind Matty Pattison in the Newcastle pecking order. He was eventually sent off to Ajax in the summer of 2007.

In 2020, he told Chronicle Live: “I would like to address all the fans and apologise to them for not being able to give everything that was inside me as a footballer.

“Their treatment towards me was exquisite and I wish I could have paid them back with more goals. That is why I wanted to say sorry to all those supporters who have always been with me. I will forever be indebted to them.”

At least he has that goal against Sunderland to remember, eh?

We start this week with this goal from Albert Luque. The result that day – Sunderland 1-4 #NUFC. The manager in the dugout, Glenn Roeder who sadly passed away yesterday aged 65. Rest in peace 🖤🤍pic.twitter.com/Lu98s1hPiF

Nolberto Solano: Newcastle are in my heart; I want to coach in England