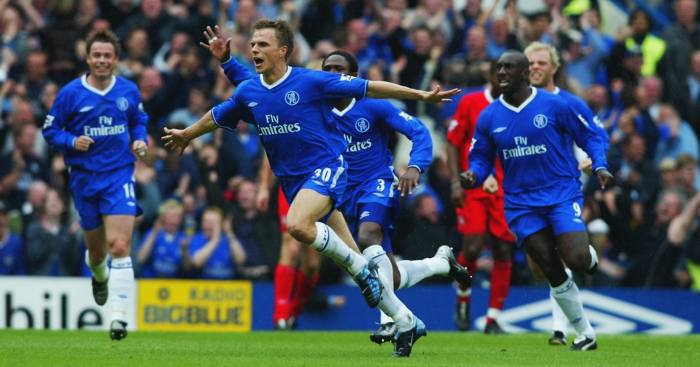 Chelsea, Liverpool and Manchester United have all been involved in some of the most memorable ‘what if’ moments in football.

It’s well known that one goal or one moment can change a football match, but what about when that goal or moment has a significant impact on the club’s future.

We’ve taken a look back through recent history to find some of the biggest moments which have changed a club’s fortunes for the foreseeable future.

Well, on the final day of the 2002-03 season Chelsea hosted Liverpool and came back from 1-0 down to defeat the Reds 2-1 to qualify for the European competition courtesy of goals from Marcel Desally and Jesper Gronkjaer.

The result is widely considered to be the deciding factor in Abramovich’s decision to purchase the club for £140million and ultimately propel them to the glory they have been enjoying ever since.

On this day: 2003 – Jesper Gronkjaer scored THIS goal for #Chelsea (vs Liverpool). #CFC pic.twitter.com/DlLzsvja4z

Orient reached the 2014 League One play-off final, where a 2-2 draw took them to penalties against Rotherham, with the Yorkshire side winning the shoot-out 4-3 and earning promotion to the Championship.

The following season, Orient were relegated to League Two, and dropped into non-league in 2017 after a 112-year stay in the professional ranks.

They finished 13th in the National League in 2017-18 amid a host of financial troubles.

This day 4 years ago Alex Revell scored one of the greatest goals in Playoff History for Rotherham against Leyton Orient.

🤞for the Millers today #rufc pic.twitter.com/T6LvyT7NJr

Ferguson was in his fourth season without winning anything at Manchester United and he looked to be on the brink of losing his job, especially after a run of six defeats and two draws at the start of the season.

After seven games without a win, United were drawn against in-form Nottingham Forest in the third round of the FA Cup and were expected to be on the losing side.

Martin Edwards has since dispelled the myth that Ferguson would have been sacked had United lost, but he also admitted “there was a lot of pressure to make a change”.

As it turns out, we never got to find out what would happen had United lost as Mark Robins scored an unexpected winner and the Red Devils went on to reach the final, winning 1-0 in a replay against Crystal Palace. From there, it’s fair to say Fergie did OK.

In 1999, Manchester United and Arsenal were at the height of their duopoly of English football.

Arsenal were chasing a second successive league and cup double, while United were on the verge of an historic treble.

The pair met in the FA Cup semi-final, and a thrilling replay saw the sides tied at 1-1, before Roy Keane was sent off and then, in the dying minutes, Arsenal were awarded a penalty.

Up stepped Bergkamp – who had already scored – but Peter Schmeichel was equal to it, beating the spot-kick away before Ryan Giggs’ wonder-goal sent United into the final, while they pipped Arsenal to the league title by a point after Wenger’s side lost to Leeds on the final day.

“That miss was one of the biggest blows in my career,” Bergkamp said. “Football is a game of moments. If I score the penalty, they probably don’t win the treble. That made it their season.”

After a few years of financial trouble, former Chelsea owner Ken Bates had bought the club and Kevin Blackwell led Leeds to the Championship play-off final in 2006. Things looked to be on the up again.

However, they were defeated 3-0 by Watford at the Millennium Stadium, and further financial issues saw the club drop into the third tier the following season for the first time in their history.

Between 1997 and 2002, Leverkusen finished second in the Bundesliga four times, culminating with them becoming the first team to reach a Champions League final without ever winning a national championship.

The 2002 season was dubbed the ‘Treble Horror’ as they finished second in the league, were defeated by Schalke in the DFB Pokal final and then by Real Madrid in the Champions League showpiece, with Zinedine Zidane netting a sensational winner.

Leverkusen then went on to see key players such as Ze Roberto and Michael Ballack move to Bayern Munich, and only narrowly avoided relegation the following season.

At the end of the 2017-18 campaign, Oldham Athletic were relegated to League Two, where they will play in the fourth tier for the first time since 1971.

It completes a steady decline which many supporters put down to Mark Hughes, who scored a late equaliser for Manchester United to force a replay against the Latics in the 1994 FA Cup semi-final.

They failed to win another game that season and were relegated from the Premiership on the final day, before three struggling seasons in Division One ended in relegation once more.

They had managed just six top half finishes in the third tier in 20 years, before their relegation in 2018.

On this day in 1994, Mark Hughes scores in the last minute of extra time to see @90sManUtd draw 1-1 with Oldham in the FA Cup Semi Final at Wembley. Neil Pointon had put the Latics ahead #Keepit90s pic.twitter.com/Bj8CGDDv6p

The 1999 Division Two play-off final win over Gillingham is widely considered one of the most important games in Manchester City’s history.

The Gills were two up only for Kevin Horlock to score in the 90th minute and Paul Dickov to equalise in the fifth minute of added time, with City winning on penalties.

It was City’s only ever season in the third tier, and they used their momentum to win immediate promotion to the Premiership the following year, spending just one season after that in the second tier before their glory years came.

Gillingham won promotion the following year, but ever since Championship relegation in 2005, they have flitted between League One and League Two.

Paul Dickov scores a 95th minute equaliser in the 1999 Second Division play off final vs Gillingham, making it 2-2 having been 2-0 down in the 90th minute. What a roar. #MCFC #ManCity #ManchesterCity pic.twitter.com/zRcxnb5XQY