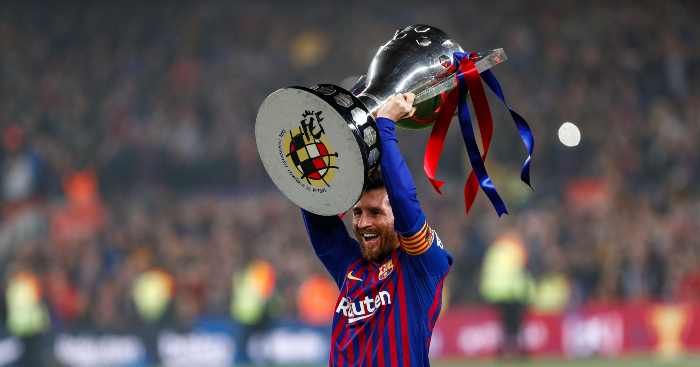 It’s pretty much impossible to put Lionel Messi’s genius into words – but Ray Hudson has certainly done his best to do so over the years.

Here are just some of Hudson’s best quotes about Messi.

“Are you kidding me? This man is absolutely mainline to pure footballing magic that belongs in a different galaxy altogether.”

Hudson was astounded when Messi collected the ball outside of the opposition box and managed to weave his way past three players before caressing the ball into the bottom corner with perfect precision.

‘He could make Ebenezer Scrooge smile’

“Lionel…staggeringly brilliant. It’s astonishing from Messi! Look at the way he picks his spot, the way only Messi can… He could make Ebenezer Scrooge smile!”

As Messi finesses a left-footed strike into the net, Hudson can be heard screaming at the top of his voice. The Argentinian playmaker had just beaten the Sevilla goalkeeper easily with a brilliant first-time finish.

‘His dart splits the darts’

“Genius. That’s beyond bullseye! His dart splits the darts. Astonishing Messi. You could drop a tarantula down his shorts and he’d still be super cool.”

Hudson describes Messi’s stunning ability in a way only he could. The captain receives the ball near the half-way line and proceeds to run through the opposition half, evading challenges and darting his way past players. It’s no surprise Hudson is left screaming with joy.

“The personification of nothing less than genius. Messi continues his pyrotechnic footballing show. If it’s not his passing, it’s the incredible dribbling technique and slingshot finish of this halo footballer!”

After dribbling past numerous defenders, Messi finds the bottom corner with ridiculous ease, which sends the Geordie into a frenzy of shouting.

“Magisterial Argentinian. Magisterial Leo. Running like he’s got a food mixer down his shorts and it’s set to beat.”

Hudson can’t control his emotions as Messi runs around countless opposition players before slotting the ball into the back of the net like it’s nothing.

“The menacing man arrives and sinks his flaming spear into the hearts of Real Madrid. Astonishing from Messi. All the pieces falling into place. Messi, born into the crossfire hurricane and he is Jumpin’ Jack Flash.”

Messi breaks Real Madrid hearts with a superb finish on the edge of the box in the El Clasico. Hudson’s got Mick and Keef on his mind.

‘Messi bewilders us all’

“Are you kidding me? Again, the staggering genius of Lionel Messi is stupefying in the round of applause around this stadium, as Messi bewilders us all.”

The commentator is reduced to tears at the marvel of Messi’s goalscoring brilliance as the Barcelona captain chips the keeper from 16 yards out and receives applause from the rival fans.