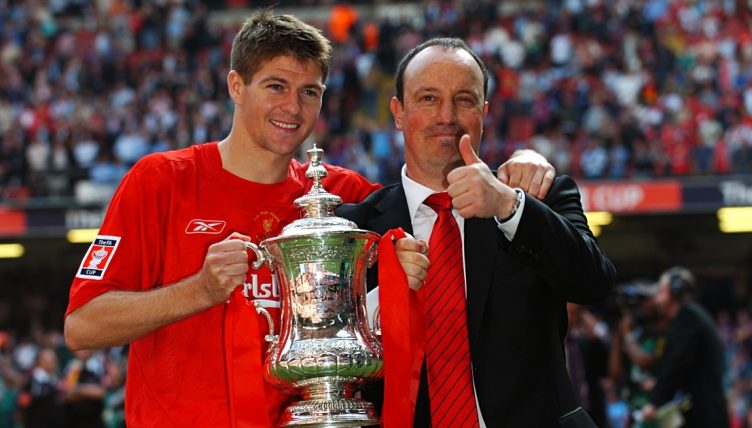 After coming through the Liverpool academy, Steven Gerrard developed into one of the best players in the world and earned legendary status at Anfield.

The midfielder made over 700 appearances for his boyhood club and won seven major honours during his 17 years in the first team.

He also provided fans will plenty of memorable moments and we’ve taken a look at seven highlights from his Liverpool career.

Having already won the FA Cup and the League Cup in 2001, Liverpool hoped to complete a memorable treble of trophies with victory in the UEFA Cup final.

They came up against Spanish side Alaves and Gerrard scored his first goal in a major final to put the Reds 2-0 ahead after 16 minutes.

Alaves staged a dramatic comeback and took the game to extra time, but Liverpool eventually won 5-4.

With Liverpool seemingly set for a group-stage exit from the Champions League at the hands of Olympiakos in December 2004, Gerrard stepped up to save the day.

Goals from Florent Sinama Pongolle and Neil Mellor had put Liverpool within a solitary strike of progressing to the knockout stages, but time was running out.

As the clock ticked round to the 86th minute, Mellor teed up Gerrard who lashed the ball home to send Anfield wild.

“When you are in that position and one falls for you it’s make or break at that moment,” Gerrard told the Independent in 2013.

“Luckily for me it was one of the sweetest strikes I have ever hit. Just such a relief to see the net go. If I had to pick my favourite goal for connection and also the reaction of the crowd – that’s the one.”

After reaching the Champions League final in 2005, Liverpool were 3-0 down to the mighty AC Milan at half-time and that was surely game over.

But Gerrard started the famous comeback with a brilliant header early in the second half and also won the penalty that led to Xabi Alonso levelling things up.

The Reds completed their astonishing triumph in a penalty shoot-out and Gerrard would go on to lift the trophy in Istanbul.

On This Day in 2005: we produced the greatest comeback in Champions League history as we beat AC Milan on pens to win our 5th European Cup 🏆

What an incredible night 🙌 #LFC pic.twitter.com/wO0Mz4Z7np

Just 12 months after their heroics in Istanbul, Liverpool found themselves 2-0 down against West Ham in the FA Cup final.

Gerrard set up Djibril Cisse to reduce the deficit before equalising himself, only for the Hammers to regain the lead.

West Ham were seconds away from a sensational win, but once again Gerrard came to Liverpool’s rescue.

The midfielder fired home from long range in injury time and also netted his penalty in the shoot-out as the Reds won the trophy.

“I’ve been asked many times what my best ever display was – it was probably this,” Gerrard told FourFourTwo in 2017.

“I had a perfect day with two goals and an assist. I’m flattered when people call it ‘The Gerrard Final’ but I do think that’s disrespectful to everybody else. It’s a team game – it was just my day.”

We couldn't let his birthday pass without showing 𝙏𝙃𝙄𝙎…

After beating the Spanish giants 1-0 at the Bernabeu in 2009, Liverpool enjoyed a special European night at Anfield in the second leg.

The deadly combination of Fernando Torres and Gerrard completely overwhelmed a Madrid side that contained the likes of Iker Casillas, Sergio Ramos and Fabio Cannavaro.

Gerrard scored each side of the break – first from the spot and then a cool half-volley into the top corner – as the Reds won 4-0 on the night.

Gerrard scored his fair share of goals against United over the years, but his performance in the 4-1 win at Old Trafford in 2009 is a particular highlight.

With the scores level at 1-1, Gerrard slotted a penalty past Edwin Van Der Sar to put the visitors into the lead.

There was a memorable celebration too, as the midfielder kissed the Liverpool badge and the camera.

He became the first player to score a hat-trick in a Merseyside derby since Ian Rush scored four against the Toffees in 1982.

“I’ve had tons and tons of abuse off these Everton fans since I made my debut so to score the hat-trick at Anfield was a special moment from my point of view,” Gerrard told Sky Sports in April 2020.

Steven Gerrard made his 400th Premier League appearance for Liverpool 🔴

And, like a true red, he marked it with a hat-trick against Everton 😏pic.twitter.com/t3JdiVG4lS