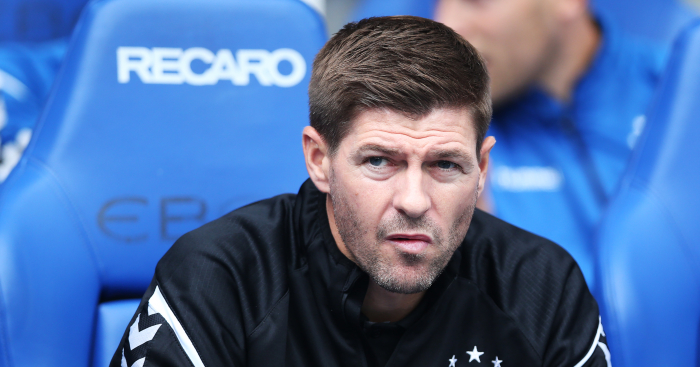 Liverpool icon Steven Gerrard has quickly won the hearts of Rangers supporters – and the fact he is more than happy to speak his mind to the media has certainly helped.

Gerrard was a surprise appointment as Rangers boss in the summer, with his only previous coaching experience coming with Liverpool’s academy. Celtic’s dominance in Scotland was expected to go unchallenged.

But the former England captain has made an impressive start to life as a manager – and even better, he is unwilling to take any sh*t from the media or the opposition.

Don’t ask Gerrard whether he thinks Rangers are over-reliant on Alfredo Morelos’ goals.

It's most enjoyable watching Gerrard deal with the media in Scotland pic.twitter.com/LNSEEvNbEN

After an all-action first SPL game, in which Gerrard’s side drew 1-1 with Aberdeen, the Rangers boss wasn’t holding back.

“Anyone at this game or who watched on TV must know we were much better than Aberdeen,” Gerrard said.

“Aberdeen didn’t have any idea against us, they only had one idea and it was to lump it into the box. Today we’re a class above Aberdeen. I thought we were tremendous.”

Alfredo Morelos was sent off after 12 minutes against the Dons, but the red card was later downgraded – and Gerrard didn’t hold back on his thoughts on Rangers’ luck with referees.

“It seems like the world is against us. I’ve watched footage. Look, I don’t think we ever get anything to go for us. Everything we have seen today is about Rangers. So someone should give me answers on that.”

After one journalist put Jordan Rossiter in a slightly awkward position, Gerrard was happy to jump in to help out his former Liverpool team-mate.

Rangers took on Croatian club Osijek in the second qualifying round of the Europa League, and their opponents did their best to wind Gerrard up before the second leg.

“I was closely watching Steven Gerrard when he came out – I couldn’t believe it because he was such a tiny man.”

“We will always be respectful to opponents both individually and collectively here at Rangers,” Gerrard responded. “We will go do what we’re capable of doing. We can’t control what comes out of opposition camps.”

Rangers drew 1-1 in Croatia to win the tie on aggregate, after which Gerrard was slightly less diplomatic.

“Talking doesn’t win you football matches, it doesn’t get you results. Sometimes it doesn’t help your players, it just motivates the opposition,” he said.

“We thrive on all that kind of talk. We enjoyed it. My players came out and played like men and we did our talking on the pitch.”

“They had confidence, they had ego, and they are devastated,” Gerrard said after his side drew 0-0 in the second leg against Maribor in Europa League qualifying, winning 3-1 on aggregate.

“They had no respect for us,” Gerrard added. “But my players have proved over two legs we are better than Maribor, and that gives me great confidence going forward.”

After Rangers beat Hearts 2-1 to go top of SPL, Levein launched into an incredible rant at the officiating, suggesting his side were playing against 13 men, including the referee and linesman, and also picked out Gers’ striker Morelos.

“How Morelos stays on the park and gets through that without a booking I’ll never know,” he said. “Some of the decisions today were abysmal.”

When asked about Levein’s comments, Gerrard was less than impressed.