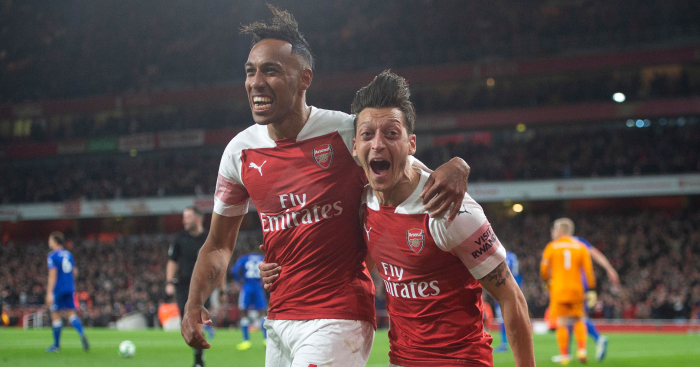 Arsenal have been renowned for their intricate passing play over the course of the Premier League era – and as a consequence have conjured up some truly breathtaking team goals.

The Gunners entered the Premier League with the pragmatic George Graham in charge and were hardly swashbuckling under Bruce Rioch, but the arrival of Arsene Wenger changed all that.

Here are some of the most memorable team goals the Gunners have scored since the turn of the millennium. This isn’t ‘walking it in’, it’s scoring with style.

It’s always sweet to score against your arch-rivals, but it’s even sweeter when the goal secures you the title.

On the final day of their Invincibles season, Arsenal clinched their third Premier League title thanks to this dazzling goal from their captain.

It was, unsurprisingly, Thierry Henry who was the main orchestrator of the move, expertly driving forward from his own half and cutting through the Spurs defence with a brilliant pass to find Dennis Bergkamp.

The Dutchman picked out Vieira near the penalty spot, with the talisman sliding the ball in to make the dream a reality.

Spurs came back from two behind to earn a draw, but ultimately they could not spoil the party.

Arsenal, who were defending their Premier League title, went into this match against Liverpool five points off the top. They lost 2-1 and ultimately finished second, but there were still plenty of enjoyable moments, not least this goal.

It wasn’t exactly a full team move, but it was a fine example of the speed and movement of the Gunners around that time.

Vieira started the move, advancing with purpose and planting the ball to Henry’s feet on the edge of the box.

The striker held it up and laid off to Robert Pires, whose perfectly weighted one-touch pass found Vieira through on goal.

The captain’s assured dink over Chris Kirkland was the icing on the cake. Delightful stuff.

Wilshere scored this jaw-dropping goal in a 4-1 win against Norwich City in October 2013.

After giving the ball to Santi Cazorla on the edge of the box, Wilshere continued his run into the area. What happened next was a masterclass in one-touch, close-quarters passing football.

Cazorla picked out Olivier Giroud, who deftly flicked the ball up to Wilshere with the side of his boot. The midfielder somehow span the ball back towards the striker while running forward.

Despite the abundance of defenders in his way, Giroud delicately returned the ball to Wilshere, and the England international buried it first time on the volley, leaving the Emirates stunned and delighted in equal measure.

Arsenal beat Sunderland 4-1 to move just one point off the top of the table with 11 games remaining, but what everyone remembers from that day is this superb goal from Rosicky.

The Czech was not only the finisher of this slick move, he was also instrumental in the build-up play that led to the goal.

He received the ball out wide and brilliantly exchanged with Cazorla and Wilshere before handing the ball to Giroud on the edge of the box.

The towering striker produced his best Dennis Bergkamp impression by using the outside of his foot to relay the ball back into the path of Rosicky.

The midfielder then sublimely dinked the ball over the hapless Vito Mannone.

A Puskas Award winner, this one. It’s the goal which, quite unfairly, is remembered mainly for the sublime acrobatic finish. In actuality, the build-up play was just as glorious.

Crystal Palace were dispossessed in the Gunners’ half as Lucas Perez seemed to forget his position and lunged in to make an interception. Hector Bellerin gathered the ball to a pass to Giroud on the halfway line.

The striker flicked the ball to Granit Xhaka, who laid it off for Alex Iwobi. The winger then passed to Alexis Sanchez on the flank, and the Chile international cut inside to put in an awkward cross to Giroud, who’s charging into the box.

The ball from Sanchez could’ve been delivered much more accurately, but that didn’t faze Giroud, who pulled off a f*cking scorpion kick.

Has there been a greater Arsenal goal? Possibly not.

Ramsey had a contract offer withdrawn days before this match and it appeared he had a point to prove with this goal.

In a 5-1 win over Fulham, the Welshman dinked the ball over a sliding defender deep in the opposition half.

Having charged into space, and after a game of Headers and Volleys between Alexandre Lacazette and Hector Bellerin, the midfielder found himself with the ball on the halfway line.

Ramsey himself then headed the ball to Henrikh Mkhitaryan on the wing, with the Armenian in turn feeding Pierre-Emerick Aubameyang.

The forward cut the ball back to Ramsey, who finished the move by flicking the ball goalbound with the inside his heel.

It was a game that featured plenty of fantastic goals, but it was the Gunners’ third that people were really swooning over.

Mesut Ozil, who was sensational throughout, dummied the ball to Lacazette. The Frenchman then returned the ball to Ozil, tricking the Foxes’ last line of defence.

Ozil could have scored himself but instead passed the ball across goal to give Aubameyang an easy finish.

Following the goal, supporters in the stands chanted: “We’ve got our Arsenal back.”

Great team goal by Aubameyang. Could watch this over and over again. Love football played like this. #ARSLEI #Arsenal #AFC pic.twitter.com/deZIRrg5cr