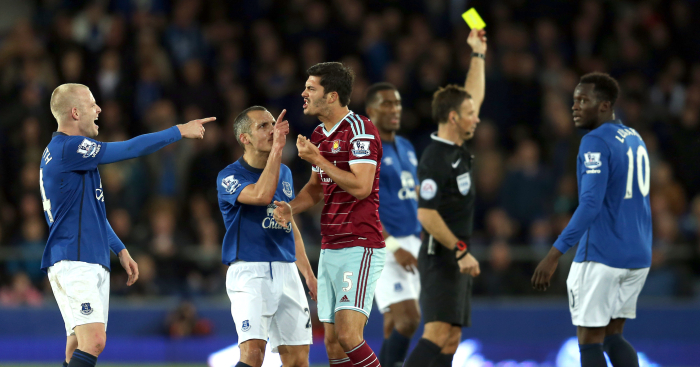 Football has a wonderful tendency to throw up some glorious images – and Tottenham, Manchester United and Everton men all star in some of the most ludicrous Premier League photos of the current decade.

There’s a reason why the Premier League has remained popular over time, and it’s nothing to do with the quality of football on display.

If you look beyond the more obvious highlights – nonsense like goals and nutmegs which you can get anywhere in the world – you can find a rich tapestry of some of the most glorious, intriguing and, yes, confusing images in professional sport.

I recently shared some of my favourites and, as is the way with Twitter, a fair few people got in touch to let me know what I’d missed.

So, without further ado, here are the greatest Premier League* photos of the decade, along with a little bit about just what makes them so great. 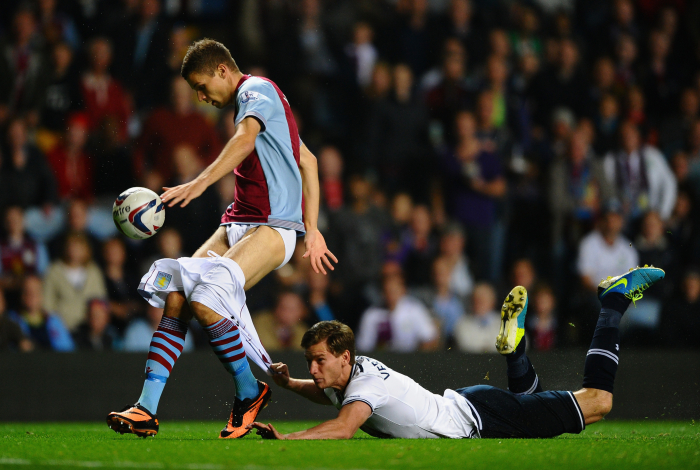 If it wasn’t for this photo, you probably wouldn’t even remember the existence of Nicklas Helenius.

The Danish striker played just six times for Aston Villa – that’s less than half as many appearances as Libor Kozák, who you’d also forgotten about – and scored just once. However, did Kozák ever get pantsed in front of the cameras by Jan Vertonghen? That’s what I thought.

There’s so much to love about this photo: you’ve got Vertonghen’s positioning – the horizontal gait of a man pushing for a gold medal in the skeleton – and the intent with which he stares off into the middle distance as if to give an impression of maybe having his eyes on the ball.

And then Helenius, who does have his eyes on the ball, captured in the split second before he takes another look down and realises what’s going on. We’ve got him at the moment at which he’s realised he is snagged on something but can’t figure out what exactly.

Most notably, however, we can look at this in the context of the game itself. The referee ignored Helenius’ appeals for a foul, despite the pretty clear evidence of shorts round ankles and a very guilty looking Belgium.

It’s like police showing up at the scene of a heist to find a man dressed all in black with a diamond in his back pocket and concluding “ah, these jewels probably just robbed themselves”.

*Yes, this one was in the League Cup, but that’s not going to stop me including it – it’s just that good.

Yakubu struggling to catch up with a chicken 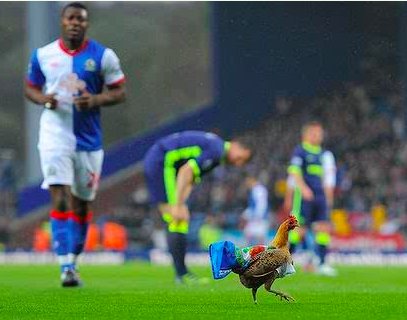 There are a few combinations of words which only exist alongside one another when something has gone very wrong. One of these combinations is “protest chicken”.

Blackburn fans sent a chicken onto the Ewood Park pitch, spurred on by anger at owners and poultry magnates Venky’s, because 2012 was a much simpler time. In fact, it’s probably one of the few things to have happened that year which still stands up to how bizarre the world has become since.

If you were to pick one player to chase down any animal – human, chicken, tortoise, whatever – it would not be Yakubu.

The Nigerian striker was the sort of player who would always be in the right place at the right time purely so he could avoid moving too much, and yet he seems to have the puffed-out cheeks of a man whose response to being forced to capture a chicken is “oh man, not this again”.

A few seconds later [spoilers], the bird was gathered by a combination of Yakubu and opposing goalkeeper Ali Al-Habsi, who you feel had an unfair advantage by using gloves. 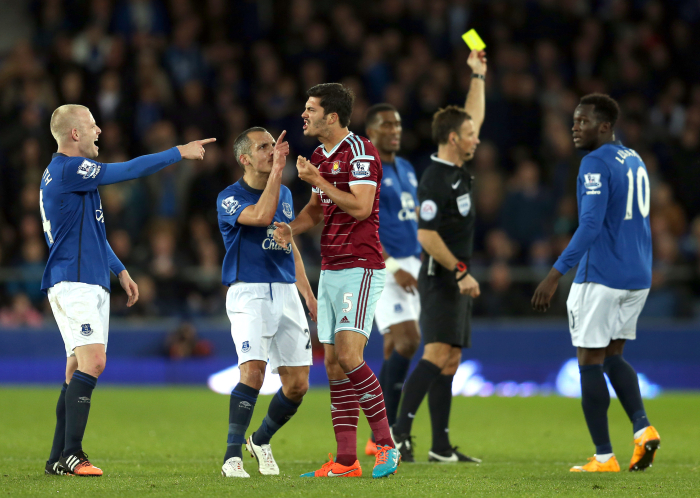 Your eyes might be drawn to Naismith and Tomkins, and with good reason, but there’s so much more going on here – each time you look at the photo, there’s something new to catch your eye.

It almost looks as though there are two scenes in one, with the Clattenburg-Distin-Lukaku axis occurring in a different era to the rest, like Michael Caine being visited by the three ghosts in A Muppet Christmas Carol. Here, Lukaku is Caine’s Scrooge, looking on at the joy his future self will miss out on – and what joy.

Not content with his voice and the way in which he generally carries himself, Basildon’s finest James Tomkins has decided to do an estimation of a ‘Cockney face’ so accurate even Danny Dyer would consider it a bit too on-the-nose.

Rising up to meet him is Leon Osman, for some reason entering a confrontation trying to make himself look smaller, like the inverse of Cristiano Ronaldo in a line-up photo.

The coup de grace, though, is Naismith. There’s so much to love about the Scot’s actions: the stock-straight pose, the need to point as well as laugh (yes, he’s probably just shouting, but the still image gives it a beautiful ambiguity), and the fact that he looks to have positioned himself so as to ensure the photographer can obey the rule of thirds almost perfectly.

In fact, it’s so captivating that you hadn’t even noticed Clattenburg seemingly wearing a poppy watch on his wrist.

Phil Jones tearing up the rulebook 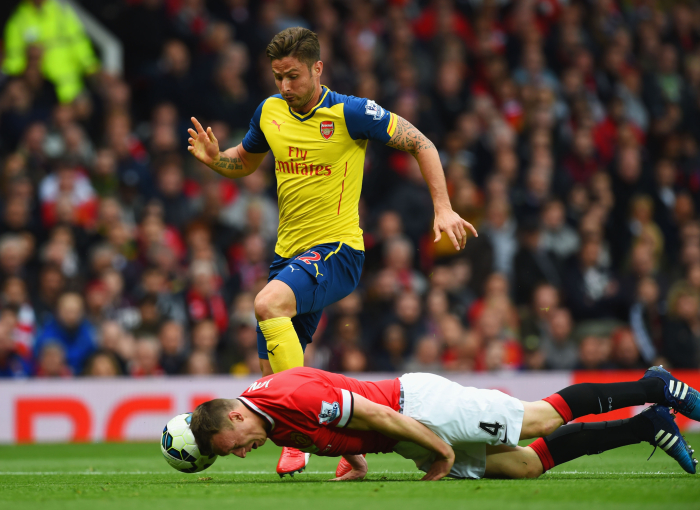 This gallery would be incomplete without a photo of Phil Jones, and there could only really be one photo of the human meme to include.

Unlike the others on this list, the still image isn’t quite as captivating as video footage of the same incident, but that only speaks to the quality of Jones’ fantastical, baffling movement.

What can we say about this which hasn’t already been said? Well, quite a lot, as it turns out, because most of the conversation around the act involves stifled laughter and unapologetic gawping. That might feel harsh in any other circumstance, but here it’s hard to conceive of any more natural response.

It feels fitting that Jones’ best example of ‘the proper technique’ comes in this form: his body is positioned perfectly for a diving header, providing you ignore both the position of the ball relative to his head, and the distance from the ground.

Some great photos capture a moment at which someone lets their façade slip, while others draw their appeal from a familiar individual in unfamiliar circumstances.

This, however, is pure, unfiltered Jones: a man whose behaviour screams “don’t ask questions, they’ll only lead to more questions which are even more difficult to answer”.

a close contender, which I feel will only improve with time, can be found here pic.twitter.com/L2eSRHBvge

The scene is something from a war movie: bodies strewn on the ground, Roberto Firmino with his head bowed as he turns away, Naby Keita and Michail Antonio gazing off into the middle distance, Fabián Balbuena with his hand in front of his face, literally unable to look.

The reason? Mark Noble and Jack Wilshere have each, within seconds of one another, taken a football to the crotch.

The expression on Rio’s face is one of sheer terror, as if he’s stared into the hellmouth and seen horrible, unrepeatable things.

Tevez, meanwhile, looks determined, a man on a mission. He knows the cameras are there, but there is no shame in his actions. He has seen what needs to be done, and he is doing it.

Look, we all know what this looks like – there’s absolutely no mistaking it.

Tevez has pressed the button for a can of coke in a vending machine and it’s got lodged in the middle section, so he’s reaching in to get what he paid for. 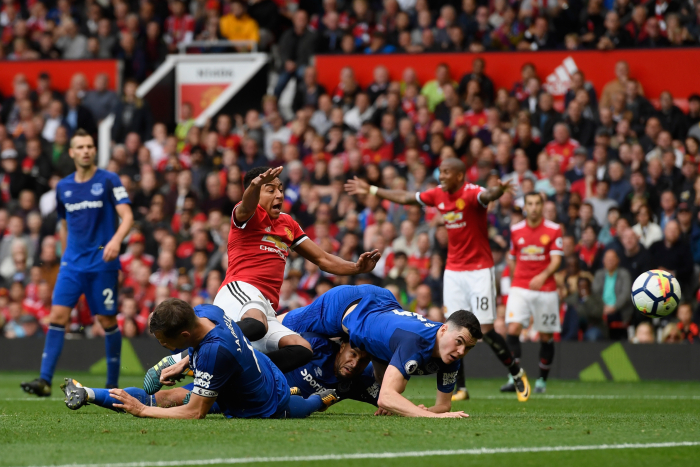 This would be both the easiest and most difficult ‘spot the ball’ challenge, all at once. From Ashley Young’s vocal appeal to Morgan Schneiderlin’s curious glance (we’ll ignore Henrikh Mkhitaryan, who could well just be staring at his reflection in the back of Young’s head), it’s easy to see where the action is.

Certain aspects of the photo suggest control: Jesse Lingard’s boot suggests a deliberate connection with the ball, while Phil Jagielka has captured a sensible brace motion and Michael Keane’s facial expression is nothing if not deliberate.

However, no two aspects of one player’s expressions or movement – either alone or relative to others – can be easily explained. Certainly not that of Ashley Williams, who appears to jus be a disembodied head.

A metaphor for Everton’s defending in the five years since David Moyes’ departure? Almost certainly.