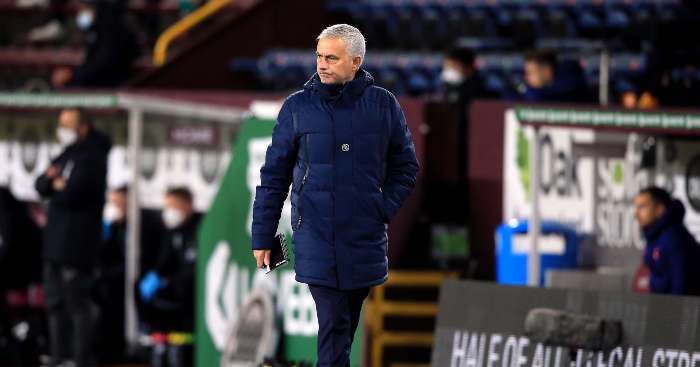 Despite picked up a reputation of having an abrasive personality, Tottenham manager Jose Mourinho has given us plenty of laughs with his posts on Instagram.

These have ranged from his reaction to what has happened in games, to him trying to look natural while posing or attempting to get a point across.

Whatever the purpose for them is, they’ve been hilarious, and we’ve picked seven of our favourite ones so far.

We reckon that after getting this photo taken, Mourinho will have said something like: “You lot took 15 shots during that game and this is the only decent one we’ve got all night.”

The mask is covering most of his face, but the eyes are enough to tell you just how frustrated he was after the 1-0 loss against Royal Antwerp.

Jose Mourinho via Instagram: “Bad performances deserve bad results. Hope everyone in this bus is as sad as I am. Tomorrow 11am training.” pic.twitter.com/MSMIqlgg13

You’ve definitely seen this one, as it has gone viral with fans predicting what it is he was watching. It’s probably some link up between Heung-min Son and Harry Kane, or looking back to his days with Didier Drogba.

What we can see is more important though, the crossed legs, the popcorn, the abundantly clear content feeling he has, it’s glorious.

The older generation always seems to bemoan how much time younger people spend on their phone. Mourinho may be the Special One, but he’s still human.

There’s something in the 57-year-old’s stance that makes it seem as though he’s proving a big point, but we’re not sure whether Ledley King also being glued to his screen helps that or not.

Mourinho is clearly someone who is incredibly passionate about his job, but everyone needs some downtime. It turns out his is watching Formula 1 with the boys.

It’s the incredibly wholesome, and surprisingly quick, thumbs up at the end which has got this post onto the list.

💬 “Sunday without a match is a Formula 1 Sunday. Especially with Portimao Grand Prix 🇵🇹”#PortugeseGP #THFC pic.twitter.com/MEtyi1wmLr

Look, Jose, your team had an absolute nightmare. No matter how you put it, they only got a draw against West Ham despite having been 3-0 up before the 82nd minute.

Even so, we have an immense appreciation for the way he has tried to use the number three to make he and his team look good despite the aforementioned fact.

“3 balls… the 3 goals we conceded against West Ham? The 3 amazing goals we scored against them? Or the 2 Europa League’s I have in the pocket and the 3rd one I am ready to fight for?” pic.twitter.com/Dq9BDqisg0

Mourinho standing with one hand in his pocket and the other reaching towards the crossbar, with a clear look of frustration written across his face is honestly brilliant.

The fact he then roped in Hugo Lloris to have a picture taken touching the crossbar is even better. Never change.

Tottenham had to ask for the goal frames to be changed before their Europa League win over Shkendija after discovering they were too small.

Nothing gets past Jose Mourinho 😂 pic.twitter.com/894bDKwQSU

Mourinho has enjoyed the first page of this book so much that he’s taken his shoes off and got his feet up, crossing his legs as to not knock over the box with his mate Hristo Stoichkov’s face on it.

All of the Instagram influencers out there need to take note, this is product placement at its finest.

Tottenham’s game against Fulham in December 2020 was eventually postponed but not before Mourinho mocked the Premier League.

Jose Mourinho not impressed by the uncertainty over tonight's match. pic.twitter.com/SdBZhOCIZO